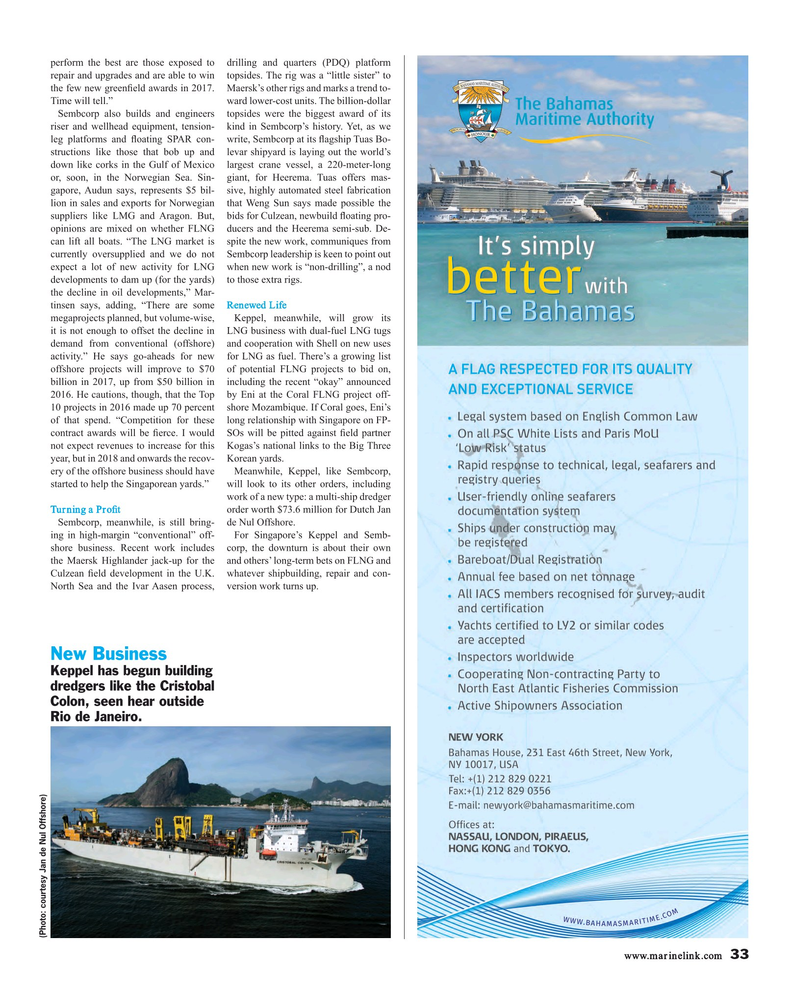 perform the best are those exposed to drilling and quarters (PDQ) platform repair and upgrades and are able to win topsides. The rig was a “little sister” to the few new green? eld awards in 2017. Maersk’s other rigs and marks a trend to-

Sembcorp also builds and engineers topsides were the biggest award of its riser and wellhead equipment, tension- kind in Sembcorp’s history. Yet, as we leg platforms and ? oating SPAR con- write, Sembcorp at its ? agship Tuas Bo- structions like those that bob up and levar shipyard is laying out the world’s down like corks in the Gulf of Mexico largest crane vessel, a 220-meter-long or, soon, in the Norwegian Sea. Sin- giant, for Heerema. Tuas offers mas- gapore, Audun says, represents $5 bil- sive, highly automated steel fabrication lion in sales and exports for Norwegian that Weng Sun says made possible the suppliers like LMG and Aragon. But, bids for Culzean, newbuild ? oating pro- opinions are mixed on whether FLNG ducers and the Heerema semi-sub. De- can lift all boats. “The LNG market is spite the new work, communiques from currently oversupplied and we do not Sembcorp leadership is keen to point out expect a lot of new activity for LNG when new work is “non-drilling”, a nod developments to dam up (for the yards) to those extra rigs. the decline in oil developments,” Mar- tinsen says, adding, “There are some Renewed Life megaprojects planned, but volume-wise, Keppel, meanwhile, will grow its it is not enough to offset the decline in LNG business with dual-fuel LNG tugs demand from conventional (offshore) and cooperation with Shell on new uses activity.” He says go-aheads for new for LNG as fuel. There’s a growing list offshore projects will improve to $70 of potential FLNG projects to bid on, billion in 2017, up from $50 billion in including the recent “okay” announced 2016. He cautions, though, that the Top by Eni at the Coral FLNG project off- 10 projects in 2016 made up 70 percent shore Mozambique. If Coral goes, Eni’s of that spend. “Competition for these long relationship with Singapore on FP- contract awards will be ? erce. I would SOs will be pitted against ? eld partner not expect revenues to increase for this Kogas’s national links to the Big Three year, but in 2018 and onwards the recov- Korean yards. ery of the offshore business should have Meanwhile, Keppel, like Sembcorp, started to help the Singaporean yards.” will look to its other orders, including work of a new type: a multi-ship dredger

Turning a Pro? t order worth $73.6 million for Dutch Jan

Sembcorp, meanwhile, is still bring- de Nul Offshore. ing in high-margin “conventional” off- For Singapore’s Keppel and Semb- shore business. Recent work includes corp, the downturn is about their own the Maersk Highlander jack-up for the and others’ long-term bets on FLNG and

Culzean ? eld development in the U.K. whatever shipbuilding, repair and con-