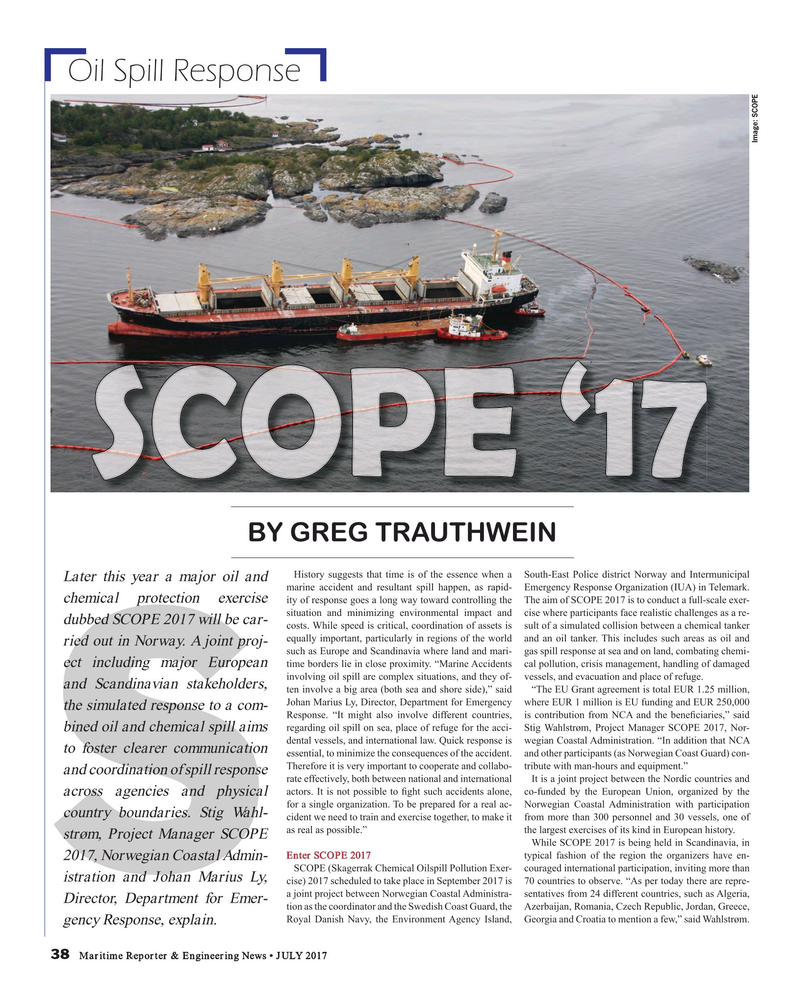 Later this year a major oil and marine accident and resultant spill happen, as rapid- Emergency Response Organization (IUA) in Telemark. chemical protection exercise ity of response goes a long way toward controlling the The aim of SCOPE 2017 is to conduct a full-scale exer- situation and minimizing environmental impact and cise where participants face realistic challenges as a re- dubbed SCOPE 2017 will be car- costs. While speed is critical, coordination of assets is sult of a simulated collision between a chemical tanker equally important, particularly in regions of the world and an oil tanker. This includes such areas as oil and ried out in Norway. A joint proj- such as Europe and Scandinavia where land and mari- gas spill response at sea and on land, combating chemi- ect including major European time borders lie in close proximity. “Marine Accidents cal pollution, crisis management, handling of damaged involving oil spill are complex situations, and they of- vessels, and evacuation and place of refuge. and Scandinavian stakeholders, ten involve a big area (both sea and shore side),” said “The EU Grant agreement is total EUR 1.25 million,

Johan Marius Ly, Director, Department for Emergency where EUR 1 million is EU funding and EUR 250,000 the simulated response to a com-

Response. “It might also involve different countries, is contribution from NCA and the bene? ciaries,” said regarding oil spill on sea, place of refuge for the acci- Stig Wahlstrøm, Project Manager SCOPE 2017, Nor- bined oil and chemical spill aims dental vessels, and international law. Quick response is wegian Coastal Administration. “In addition that NCA to foster clearer communication essential, to minimize the consequences of the accident. and other participants (as Norwegian Coast Guard) con-

Therefore it is very important to cooperate and collabo- tribute with man-hours and equipment.” and coordination of spill response rate effectively, both between national and international It is a joint project between the Nordic countries and actors. It is not possible to ? ght such accidents alone, co-funded by the European Union, organized by the across agencies and physical for a single organization. To be prepared for a real ac- Norwegian Coastal Administration with participation country boundaries. Stig Wahl- cident we need to train and exercise together, to make it from more than 300 personnel and 30 vessels, one of as real as possible.” the largest exercises of its kind in European history.

While SCOPE 2017 is being held in Scandinavia, in

SCOPE (Skagerrak Chemical Oilspill Pollution Exer- couraged international participation, inviting more than istration and Johan Marius Ly, cise) 2017 scheduled to take place in September 2017 is 70 countries to observe. “As per today there are repre- a joint project between Norwegian Coastal Administra- sentatives from 24 different countries, such as Algeria,

Director, Department for Emer- tion as the coordinator and the Swedish Coast Guard, the Azerbaijan, Romania, Czech Republic, Jordan, Greece,