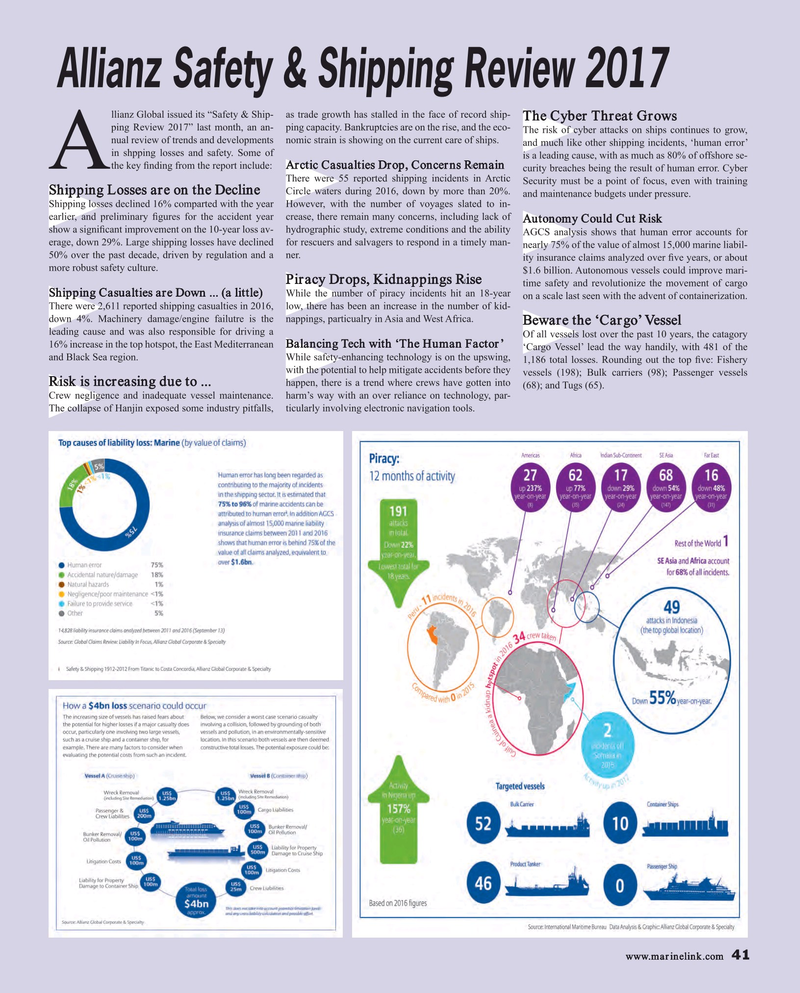 The Cyber Threat Grows ping Review 2017” last month, an an- ping capacity. Bankruptcies are on the rise, and the eco-

The risk of cyber attacks on ships continues to grow, nual review of trends and developments nomic strain is showing on the current care of ships.

and much like other shipping incidents, ‘human error’ in shpping losses and safety. Some of is a leading cause, with as much as 80% of offshore se-

There were 55 reported shipping incidents in Arctic Security must be a point of focus, even with training

Shipping Losses are on the Decline Circle waters during 2016, down by more than 20%. and maintenance budgets under pressure.

Shipping losses declined 16% comparted with the year However, with the number of voyages slated to in- earlier, and preliminary ? gures for the accident year crease, there remain many concerns, including lack of

Autonomy Could Cut Risk show a signi? cant improvement on the 10-year loss av- hydrographic study, extreme conditions and the ability AGCS analysis shows that human error accounts for erage, down 29%. Large shipping losses have declined for rescuers and salvagers to respond in a timely man- nearly 75% of the value of almost 15,000 marine liabil- 50% over the past decade, driven by regulation and a ner.

Shipping Casualties are Down ... (a little) While the number of piracy incidents hit an 18-year on a scale last seen with the advent of containerization.

There were 2,611 reported shipping casualties in 2016, low, there has been an increase in the number of kid- down 4%. Machinery damage/engine failutre is the nappings, particualry in Asia and West Africa.

Of all vessels lost over the past 10 years, the catagory 16% increase in the top hotspot, the East Mediterranean Balancing Tech with ‘The Human Factor’ ‘Cargo Vessel’ lead the way handily, with 481 of the and Black Sea region.

While safety-enhancing technology is on the upswing, 1,186 total losses. Rounding out the top ? ve: Fishery with the potential to help mitigate accidents before they vessels (198); Bulk carriers (98); Passenger vessels

Risk is increasing due to ...

Crew negligence and inadequate vessel maintenance. harm’s way with an over reliance on technology, par-