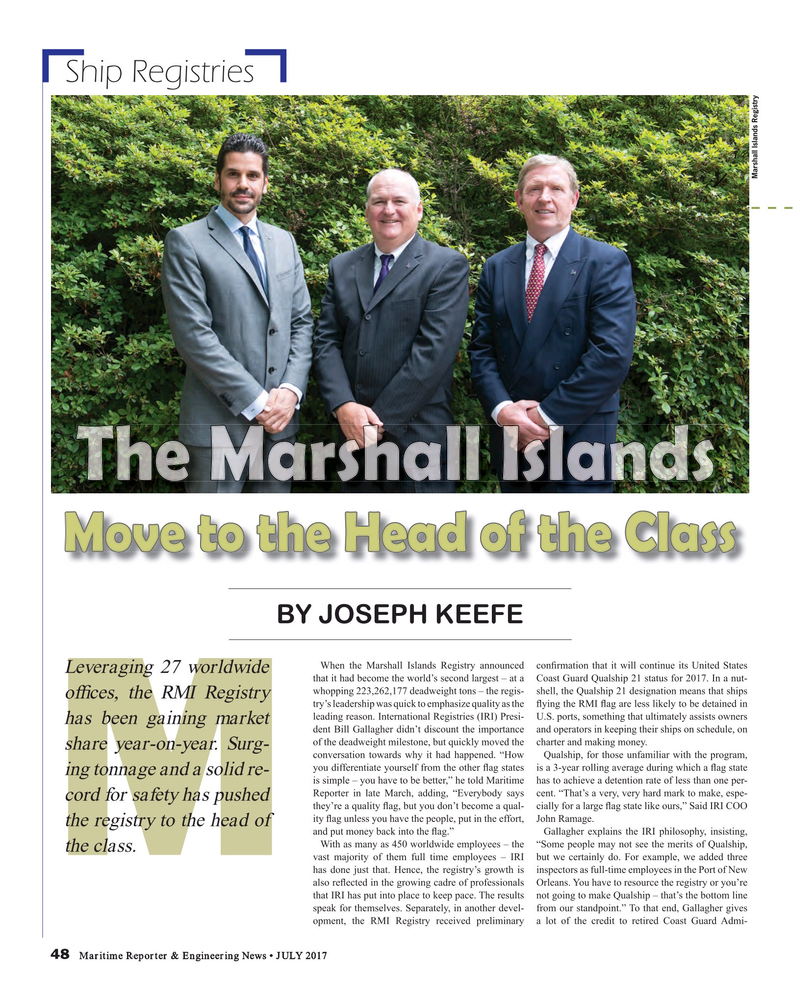 When the Marshall Islands Registry announced con? rmation that it will continue its United States

Leveraging 27 worldwide that it had become the world’s second largest – at a Coast Guard Qualship 21 status for 2017. In a nut- whopping 223,262,177 deadweight tons – the regis- shell, the Qualship 21 designation means that ships of? ces, the RMI Registry try’s leadership was quick to emphasize quality as the ? ying the RMI ? ag are less likely to be detained in leading reason. International Registries (IRI) Presi- U.S. ports, something that ultimately assists owners has been gaining market dent Bill Gallagher didn’t discount the importance and operators in keeping their ships on schedule, on of the deadweight milestone, but quickly moved the charter and making money.

share year-on-year. Surg- conversation towards why it had happened. “How Qualship, for those unfamiliar with the program, you differentiate yourself from the other ? ag states is a 3-year rolling average during which a ? ag state ing tonnage and a solid re- is simple – you have to be better,” he told Maritime has to achieve a detention rate of less than one per-

Reporter in late March, adding, “Everybody says cent. “That’s a very, very hard mark to make, espe- cord for safety has pushed they’re a quality ? ag, but you don’t become a qual- cially for a large ? ag state like ours,” Said IRI COO ity ? ag unless you have the people, put in the effort, John Ramage.

the registry to the head of and put money back into the ? ag.” Gallagher explains the IRI philosophy, insisting,

With as many as 450 worldwide employees – the “Some people may not see the merits of Qualship, the class.

vast majority of them full time employees – IRI but we certainly do. For example, we added three has done just that. Hence, the registry’s growth is inspectors as full-time employees in the Port of New also re? ected in the growing cadre of professionals Orleans. You have to resource the registry or you’re that IRI has put into place to keep pace. The results not going to make Qualship – that’s the bottom line speak for themselves. Separately, in another devel- from our standpoint.” To that end, Gallagher gives opment, the RMI Registry received preliminary a lot of the credit to retired Coast Guard Admi- 48 Maritime Reporter & Engineering News • JULY 2017