Read this page in Pdf, Flash or Html5 edition of May 2018 Maritime Reporter Magazine 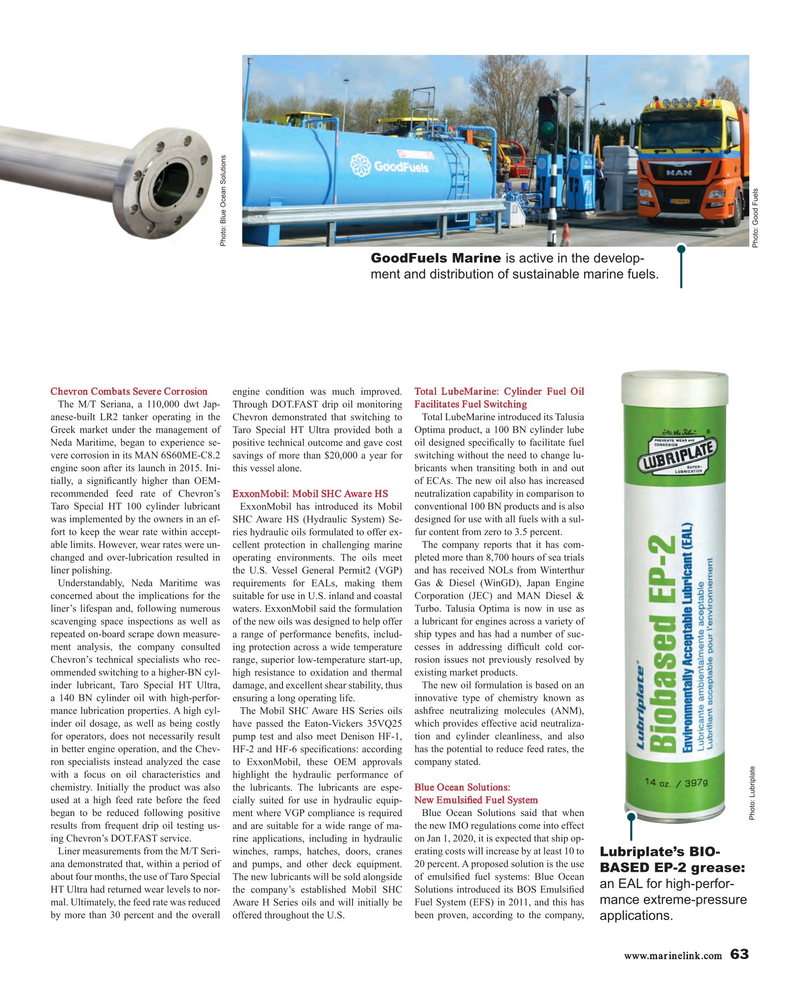 GoodFuels Marine is active in the develop- ment and distribution of sustainable marine fuels.

Greek market under the management of Taro Special HT Ultra provided both a Optima product, a 100 BN cylinder lube

Neda Maritime, began to experience se- positive technical outcome and gave cost oil designed speci? cally to facilitate fuel vere corrosion in its MAN 6S60ME-C8.2 savings of more than $20,000 a year for switching without the need to change lu- engine soon after its launch in 2015. Ini- this vessel alone. bricants when transiting both in and out tially, a signi? cantly higher than OEM- of ECAs. The new oil also has increased recommended feed rate of Chevron’s ExxonMobil: Mobil SHC Aware HS neutralization capability in comparison to

Taro Special HT 100 cylinder lubricant ExxonMobil has introduced its Mobil conventional 100 BN products and is also was implemented by the owners in an ef- SHC Aware HS (Hydraulic System) Se- designed for use with all fuels with a sul- fort to keep the wear rate within accept- ries hydraulic oils formulated to offer ex- fur content from zero to 3.5 percent.

able limits. However, wear rates were un- cellent protection in challenging marine The company reports that it has com- changed and over-lubrication resulted in operating environments. The oils meet pleted more than 8,700 hours of sea trials liner polishing. the U.S. Vessel General Permit2 (VGP) and has received NOLs from Winterthur

Understandably, Neda Maritime was requirements for EALs, making them Gas & Diesel (WinGD), Japan Engine concerned about the implications for the suitable for use in U.S. inland and coastal Corporation (JEC) and MAN Diesel & liner’s lifespan and, following numerous waters. ExxonMobil said the formulation Turbo. Talusia Optima is now in use as scavenging space inspections as well as of the new oils was designed to help offer a lubricant for engines across a variety of repeated on-board scrape down measure- a range of performance bene? ts, includ- ship types and has had a number of suc- ment analysis, the company consulted ing protection across a wide temperature cesses in addressing dif? cult cold cor-

inder lubricant, Taro Special HT Ultra, damage, and excellent shear stability, thus The new oil formulation is based on an a 140 BN cylinder oil with high-perfor- ensuring a long operating life. innovative type of chemistry known as mance lubrication properties. A high cyl- The Mobil SHC Aware HS Series oils ashfree neutralizing molecules (ANM), inder oil dosage, as well as being costly have passed the Eaton-Vickers 35VQ25 which provides effective acid neutraliza- for operators, does not necessarily result pump test and also meet Denison HF-1, tion and cylinder cleanliness, and also in better engine operation, and the Chev- HF-2 and HF-6 speci? cations: according has the potential to reduce feed rates, the ron specialists instead analyzed the case to ExxonMobil, these OEM approvals company stated.

with a focus on oil characteristics and highlight the hydraulic performance of chemistry. Initially the product was also the lubricants. The lubricants are espe- Blue Ocean Solutions: used at a high feed rate before the feed cially suited for use in hydraulic equip- New Emulsi? ed Fuel System began to be reduced following positive ment where VGP compliance is required Blue Ocean Solutions said that when

Photo: Lubriplate results from frequent drip oil testing us- and are suitable for a wide range of ma- the new IMO regulations come into effect ing Chevron’s DOT.FAST service. rine applications, including in hydraulic on Jan 1, 2020, it is expected that ship op-

Liner measurements from the M/T Seri- winches, ramps, hatches, doors, cranes erating costs will increase by at least 10 to

Lubriplate’s BIO- ana demonstrated that, within a period of and pumps, and other deck equipment. 20 percent. A proposed solution is the use

BASED EP-2 grease: about four months, the use of Taro Special The new lubricants will be sold alongside of emulsi? ed fuel systems: Blue Ocean an EAL for high-perfor-

HT Ultra had returned wear levels to nor- the company’s established Mobil SHC Solutions introduced its BOS Emulsi? ed mance extreme-pressure mal. Ultimately, the feed rate was reduced Aware H Series oils and will initially be Fuel System (EFS) in 2011, and this has by more than 30 percent and the overall offered throughout the U.S. been proven, according to the company, applications.