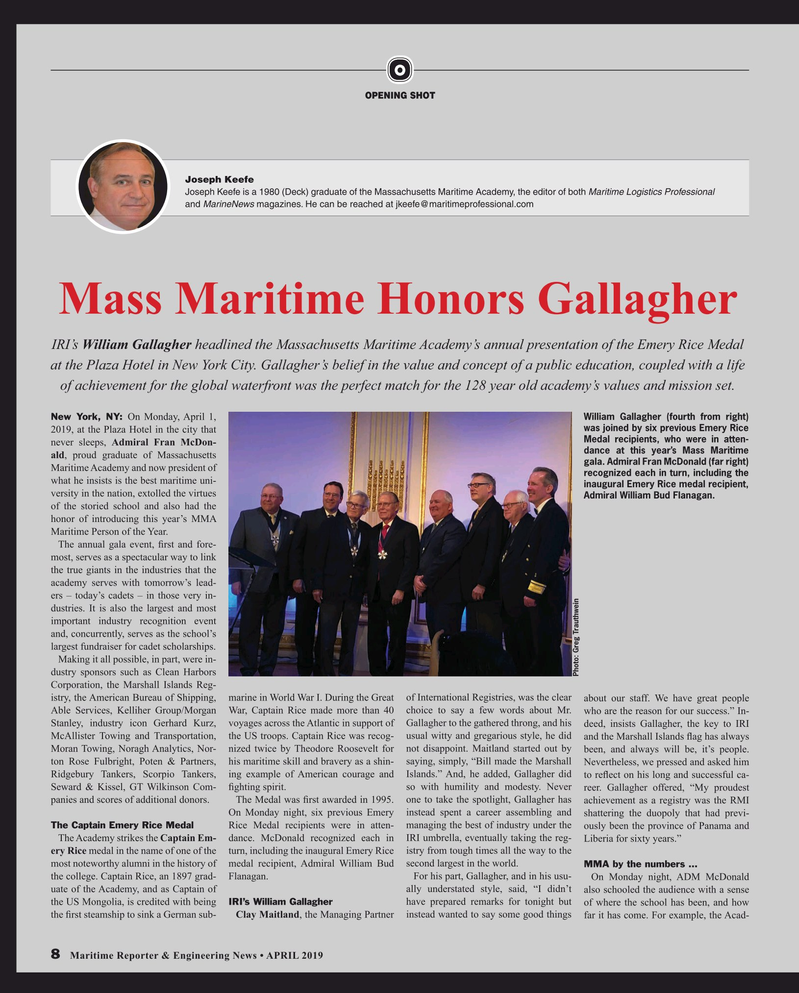 Joseph Keefe is a 1980 (Deck) graduate of the Massachusetts Maritime Academy, the editor of both Maritime Logistics Professional and MarineNews magazines. He can be reached at [email protected]

IRI’s William Gallagher headlined the Massachusetts Maritime Academy’s annual presentation of the Emery Rice Medal at the Plaza Hotel in New York City. Gallagher’s belief in the value and concept of a public education, coupled with a life of achievement for the global waterfront was the perfect match for the 128 year old academy’s values and mission set.

On Monday, April 1, was joined by six previous Emery Rice 2019, at the Plaza Hotel in the city that

Maritime Academy and now president of recognized each in turn, including the what he insists is the best maritime uni- inaugural Emery Rice medal recipient, versity in the nation, extolled the virtues

Maritime Person of the Year.

The annual gala event, ? rst and fore- most, serves as a spectacular way to link the true giants in the industries that the academy serves with tomorrow’s lead- ers – today’s cadets – in those very in- dustries. It is also the largest and most important industry recognition event and, concurrently, serves as the school’s largest fundraiser for cadet scholarships.

Making it all possible, in part, were in- dustry sponsors such as Clean Harbors

Corporation, the Marshall Islands Reg- istry, the American Bureau of Shipping, marine in World War I. During the Great of International Registries, was the clear about our staff. We have great people

Able Services, Kelliher Group/Morgan War, Captain Rice made more than 40 choice to say a few words about Mr. who are the reason for our success.” In-

Stanley, industry icon Gerhard Kurz, voyages across the Atlantic in support of Gallagher to the gathered throng, and his deed, insists Gallagher, the key to IRI

McAllister Towing and Transportation, the US troops. Captain Rice was recog- usual witty and gregarious style, he did and the Marshall Islands ? ag has always

Moran Towing, Noragh Analytics, Nor- nized twice by Theodore Roosevelt for not disappoint. Maitland started out by been, and always will be, it’s people. ton Rose Fulbright, Poten & Partners, his maritime skill and bravery as a shin- saying, simply, “Bill made the Marshall Nevertheless, we pressed and asked him

Ridgebury Tankers, Scorpio Tankers, ing example of American courage and Islands.” And, he added, Gallagher did to re? ect on his long and successful ca-

Seward & Kissel, GT Wilkinson Com- ? ghting spirit. so with humility and modesty. Never reer. Gallagher offered, “My proudest panies and scores of additional donors. The Medal was ? rst awarded in 1995. one to take the spotlight, Gallagher has achievement as a registry was the RMI

On Monday night, six previous Emery instead spent a career assembling and shattering the duopoly that had previ-

The Academy strikes the Captain Em- dance. McDonald recognized each in IRI umbrella, eventually taking the reg- Liberia for sixty years.” ery Rice medal in the name of one of the turn, including the inaugural Emery Rice istry from tough times all the way to the most noteworthy alumni in the history of medal recipient, Admiral William Bud second largest in the world.

MMA by the numbers … the college. Captain Rice, an 1897 grad- Flanagan. For his part, Gallagher, and in his usu- On Monday night, ADM McDonald uate of the Academy, and as Captain of ally understated style, said, “I didn’t also schooled the audience with a sense

IRI’s William Gallagher the US Mongolia, is credited with being have prepared remarks for tonight but of where the school has been, and how the ? rst steamship to sink a German sub- Clay Maitland, the Managing Partner instead wanted to say some good things far it has come. For example, the Acad- 8 Maritime Reporter & Engineering News • APRIL 2019