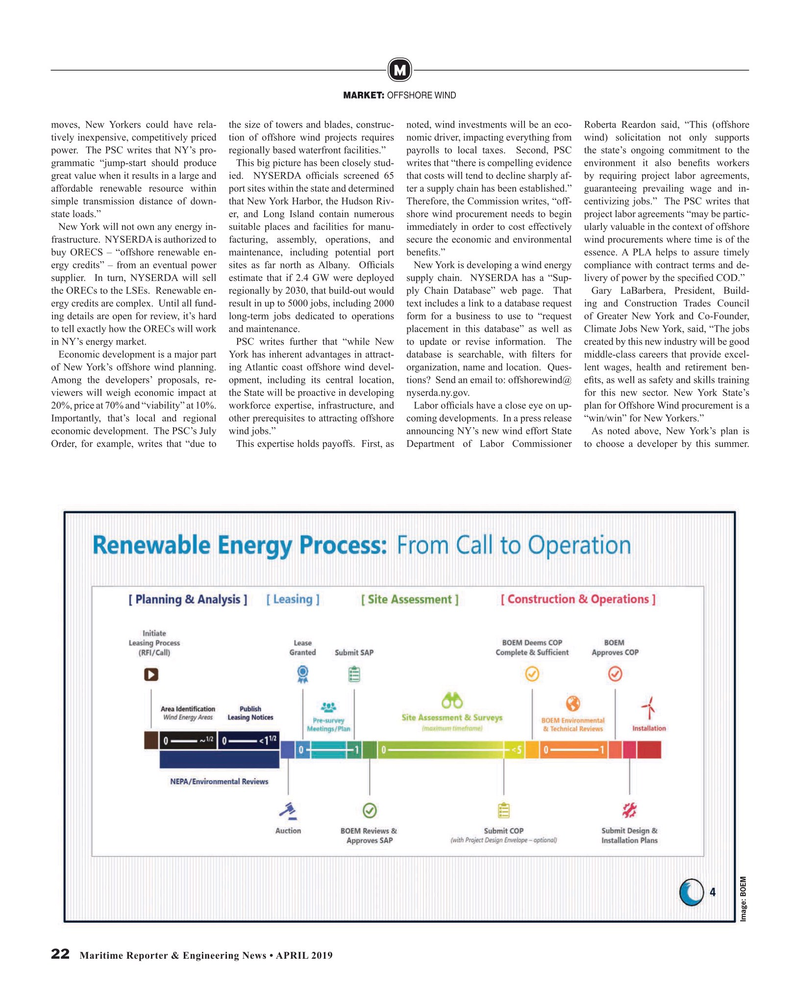 MARKET: OFFSHORE WIND moves, New Yorkers could have rela- the size of towers and blades, construc- noted, wind investments will be an eco- Roberta Reardon said, “This (offshore tively inexpensive, competitively priced tion of offshore wind projects requires nomic driver, impacting everything from wind) solicitation not only supports power. The PSC writes that NY’s pro- regionally based waterfront facilities.” payrolls to local taxes. Second, PSC the state’s ongoing commitment to the grammatic “jump-start should produce This big picture has been closely stud- writes that “there is compelling evidence environment it also bene? ts workers great value when it results in a large and ied. NYSERDA of? cials screened 65 that costs will tend to decline sharply af- by requiring project labor agreements, affordable renewable resource within port sites within the state and determined ter a supply chain has been established.” guaranteeing prevailing wage and in- simple transmission distance of down- that New York Harbor, the Hudson Riv- Therefore, the Commission writes, “off- centivizing jobs.” The PSC writes that state loads.” er, and Long Island contain numerous shore wind procurement needs to begin project labor agreements “may be partic-

New York will not own any energy in- suitable places and facilities for manu- immediately in order to cost effectively ularly valuable in the context of offshore frastructure. NYSERDA is authorized to facturing, assembly, operations, and secure the economic and environmental wind procurements where time is of the buy ORECS – “offshore renewable en- maintenance, including potential port bene? ts.” essence. A PLA helps to assure timely ergy credits” – from an eventual power sites as far north as Albany. Of? cials New York is developing a wind energy compliance with contract terms and de- supplier. In turn, NYSERDA will sell estimate that if 2.4 GW were deployed supply chain. NYSERDA has a “Sup- livery of power by the speci? ed COD.” the ORECs to the LSEs. Renewable en- regionally by 2030, that build-out would ply Chain Database” web page. That Gary LaBarbera, President, Build- ergy credits are complex. Until all fund- result in up to 5000 jobs, including 2000 text includes a link to a database request ing and Construction Trades Council ing details are open for review, it’s hard long-term jobs dedicated to operations form for a business to use to “request of Greater New York and Co-Founder, to tell exactly how the ORECs will work and maintenance. placement in this database” as well as Climate Jobs New York, said, “The jobs in NY’s energy market. PSC writes further that “while New to update or revise information. The created by this new industry will be good

Among the developers’ proposals, re- opment, including its central location, tions? Send an email to: [email protected] e? ts, as well as safety and skills training viewers will weigh economic impact at the State will be proactive in developing nyserda.ny.gov. for this new sector. New York State’s 20%, price at 70% and “viability” at 10%. workforce expertise, infrastructure, and Labor of? cials have a close eye on up- plan for Offshore Wind procurement is a

Order, for example, writes that “due to This expertise holds payoffs. First, as Department of Labor Commissioner to choose a developer by this summer.