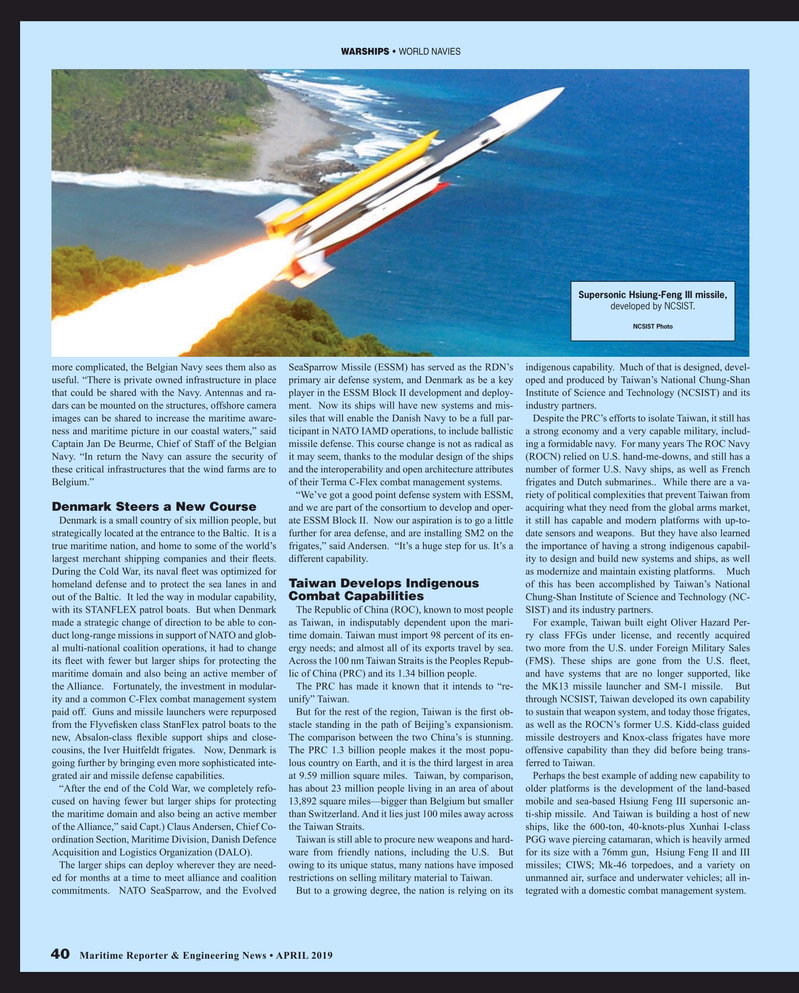 NCSIST Photo more complicated, the Belgian Navy sees them also as SeaSparrow Missile (ESSM) has served as the RDN’s indigenous capability. Much of that is designed, devel- useful. “There is private owned infrastructure in place primary air defense system, and Denmark as be a key oped and produced by Taiwan’s National Chung-Shan that could be shared with the Navy. Antennas and ra- player in the ESSM Block II development and deploy- Institute of Science and Technology (NCSIST) and its dars can be mounted on the structures, offshore camera ment. Now its ships will have new systems and mis- industry partners.

images can be shared to increase the maritime aware- siles that will enable the Danish Navy to be a full par- Despite the PRC’s efforts to isolate Taiwan, it still has ness and maritime picture in our coastal waters,” said ticipant in NATO IAMD operations, to include ballistic a strong economy and a very capable military, includ-

Captain Jan De Beurme, Chief of Staff of the Belgian missile defense. This course change is not as radical as ing a formidable navy. For many years The ROC Navy

Navy. “In return the Navy can assure the security of it may seem, thanks to the modular design of the ships (ROCN) relied on U.S. hand-me-downs, and still has a these critical infrastructures that the wind farms are to and the interoperability and open architecture attributes number of former U.S. Navy ships, as well as French

Belgium.” of their Terma C-Flex combat management systems. frigates and Dutch submarines.. While there are a va- “We’ve got a good point defense system with ESSM, riety of political complexities that prevent Taiwan from

Denmark Steers a New Course and we are part of the consortium to develop and oper- acquiring what they need from the global arms market,

Denmark is a small country of six million people, but ate ESSM Block II. Now our aspiration is to go a little it still has capable and modern platforms with up-to- strategically located at the entrance to the Baltic. It is a further for area defense, and are installing SM2 on the date sensors and weapons. But they have also learned true maritime nation, and home to some of the world’s frigates,” said Andersen. “It’s a huge step for us. It’s a the importance of having a strong indigenous capabil- largest merchant shipping companies and their ? eets. different capability. ity to design and build new systems and ships, as well

During the Cold War, its naval ? eet was optimized for as modernize and maintain existing platforms. Much homeland defense and to protect the sea lanes in and of this has been accomplished by Taiwan’s National

Taiwan Develops Indigenous out of the Baltic. It led the way in modular capability, Chung-Shan Institute of Science and Technology (NC-

Combat Capabilities with its STANFLEX patrol boats. But when Denmark The Republic of China (ROC), known to most people SIST) and its industry partners.

made a strategic change of direction to be able to con- as Taiwan, in indisputably dependent upon the mari- For example, Taiwan built eight Oliver Hazard Per- duct long-range missions in support of NATO and glob- time domain. Taiwan must import 98 percent of its en- ry class FFGs under license, and recently acquired al multi-national coalition operations, it had to change ergy needs; and almost all of its exports travel by sea. two more from the U.S. under Foreign Military Sales its ? eet with fewer but larger ships for protecting the Across the 100 nm Taiwan Straits is the Peoples Repub- (FMS). These ships are gone from the U.S. ? eet, maritime domain and also being an active member of lic of China (PRC) and its 1.34 billion people. and have systems that are no longer supported, like the Alliance. Fortunately, the investment in modular- The PRC has made it known that it intends to “re- the MK13 missile launcher and SM-1 missile. But ity and a common C-Flex combat management system unify” Taiwan. through NCSIST, Taiwan developed its own capability paid off. Guns and missile launchers were repurposed But for the rest of the region, Taiwan is the ? rst ob- to sustain that weapon system, and today those frigates, from the Flyve? sken class StanFlex patrol boats to the stacle standing in the path of Beijing’s expansionism. as well as the ROCN’s former U.S. Kidd-class guided new, Absalon-class ? exible support ships and close- The comparison between the two China’s is stunning. missile destroyers and Knox-class frigates have more cousins, the Iver Huitfeldt frigates. Now, Denmark is The PRC 1.3 billion people makes it the most popu- offensive capability than they did before being trans- going further by bringing even more sophisticated inte- lous country on Earth, and it is the third largest in area ferred to Taiwan.

grated air and missile defense capabilities. at 9.59 million square miles. Taiwan, by comparison, Perhaps the best example of adding new capability to “After the end of the Cold War, we completely refo- has about 23 million people living in an area of about older platforms is the development of the land-based cused on having fewer but larger ships for protecting 13,892 square miles—bigger than Belgium but smaller mobile and sea-based Hsiung Feng III supersonic an- the maritime domain and also being an active member than Switzerland. And it lies just 100 miles away across ti-ship missile. And Taiwan is building a host of new of the Alliance,” said Capt.) Claus Andersen, Chief Co- the Taiwan Straits. ships, like the 600-ton, 40-knots-plus Xunhai I-class ordination Section, Maritime Division, Danish Defence Taiwan is still able to procure new weapons and hard- PGG wave piercing catamaran, which is heavily armed

Acquisition and Logistics Organization (DALO). ware from friendly nations, including the U.S. But for its size with a 76mm gun, Hsiung Feng II and III

The larger ships can deploy wherever they are need- owing to its unique status, many nations have imposed missiles; CIWS; Mk-46 torpedoes, and a variety on ed for months at a time to meet alliance and coalition restrictions on selling military material to Taiwan. unmanned air, surface and underwater vehicles; all in- commitments. NATO SeaSparrow, and the Evolved But to a growing degree, the nation is relying on its tegrated with a domestic combat management system.