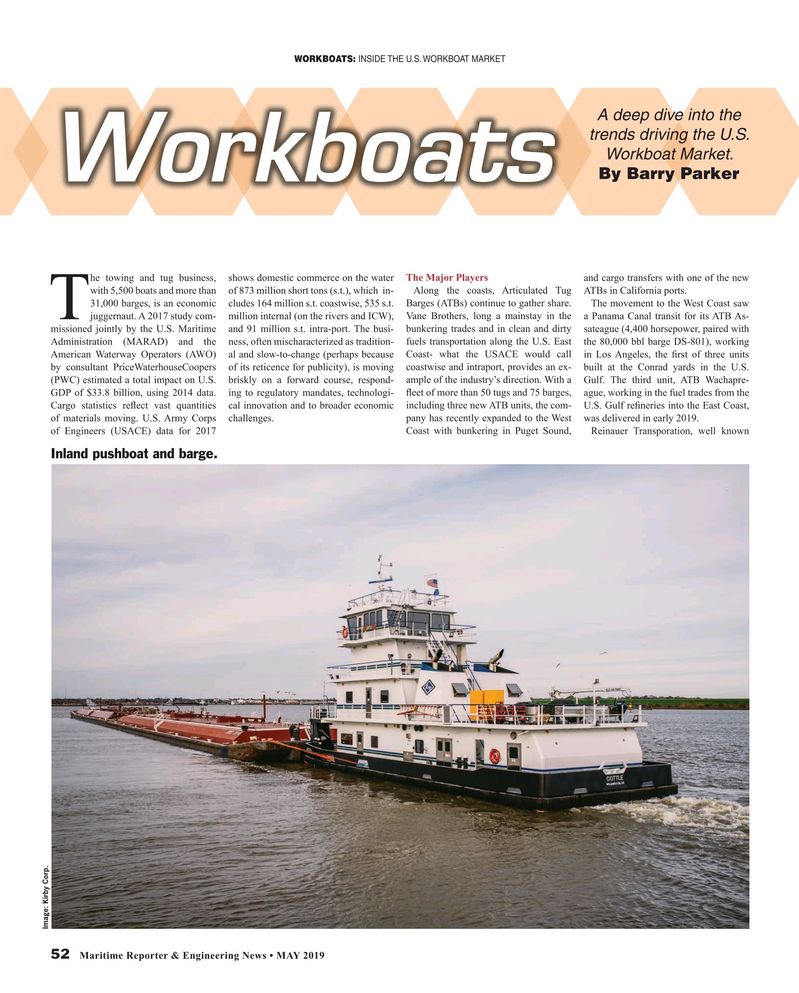 WORKBOATS: INSIDE THE U.S. WORKBOAT MARKET

A deep dive into the trends driving the U.S.

Workboats he towing and tug business, shows domestic commerce on the water The Major Players and cargo transfers with one of the new with 5,500 boats and more than of 873 million short tons (s.t.), which in- Along the coasts, Articulated Tug ATBs in California ports. 31,000 barges, is an economic cludes 164 million s.t. coastwise, 535 s.t. Barges (ATBs) continue to gather share. The movement to the West Coast saw

Tjuggernaut. A 2017 study com- million internal (on the rivers and ICW), Vane Brothers, long a mainstay in the a Panama Canal transit for its ATB As- missioned jointly by the U.S. Maritime and 91 million s.t. intra-port. The busi- bunkering trades and in clean and dirty sateague (4,400 horsepower, paired with

Administration (MARAD) and the ness, often mischaracterized as tradition- fuels transportation along the U.S. East the 80,000 bbl barge DS-801), working

American Waterway Operators (AWO) al and slow-to-change (perhaps because Coast- what the USACE would call in Los Angeles, the ? rst of three units by consultant PriceWaterhouseCoopers of its reticence for publicity), is moving coastwise and intraport, provides an ex- built at the Conrad yards in the U.S. (PWC) estimated a total impact on U.S. briskly on a forward course, respond- ample of the industry’s direction. With a Gulf. The third unit, ATB Wachapre-

Cargo statistics re? ect vast quantities cal innovation and to broader economic including three new ATB units, the com- U.S. Gulf re? neries into the East Coast, of materials moving. U.S. Army Corps challenges. pany has recently expanded to the West was delivered in early 2019. of Engineers (USACE) data for 2017 Coast with bunkering in Puget Sound, Reinauer Transporation, well known