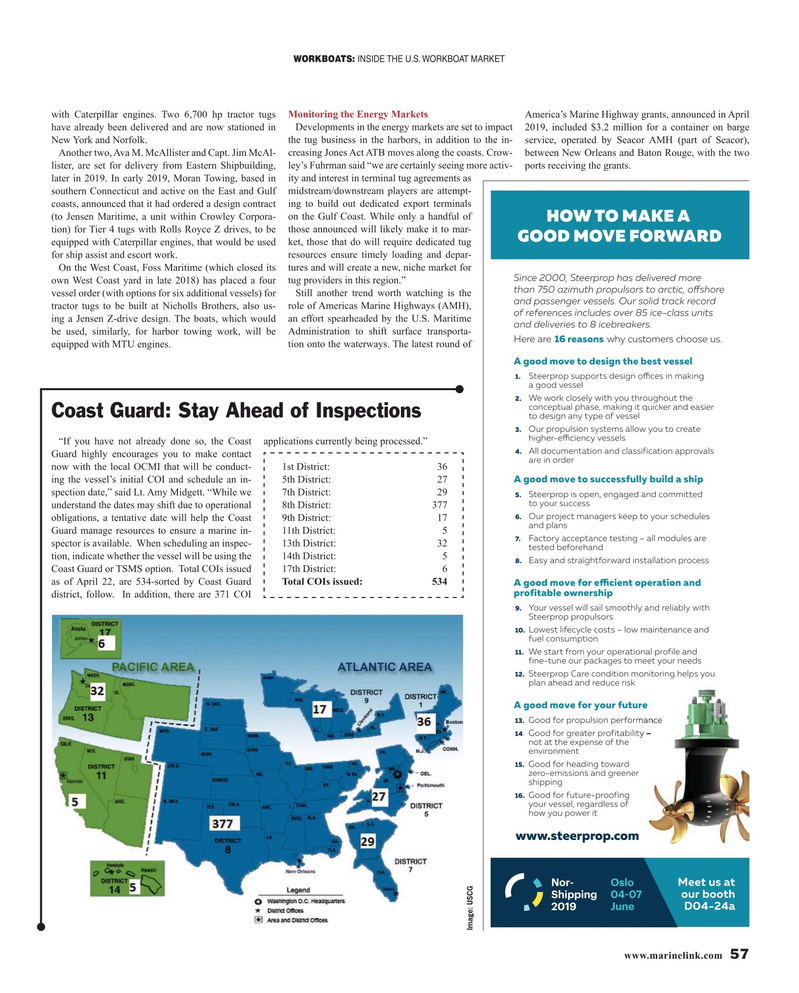 WORKBOATS: INSIDE THE U.S. WORKBOAT MARKET with Caterpillar engines. Two 6,700 hp tractor tugs Monitoring the Energy Markets America’s Marine Highway grants, announced in April have already been delivered and are now stationed in Developments in the energy markets are set to impact 2019, included $3.2 million for a container on barge

New York and Norfolk. the tug business in the harbors, in addition to the in- service, operated by Seacor AMH (part of Seacor),

Another two, Ava M. McAllister and Capt. Jim McAl- creasing Jones Act ATB moves along the coasts. Crow- between New Orleans and Baton Rouge, with the two lister, are set for delivery from Eastern Shipbuilding, ley’s Fuhrman said “we are certainly seeing more activ- ports receiving the grants. later in 2019. In early 2019, Moran Towing, based in ity and interest in terminal tug agreements as southern Connecticut and active on the East and Gulf midstream/downstream players are attempt- coasts, announced that it had ordered a design contract ing to build out dedicated export terminals (to Jensen Maritime, a unit within Crowley Corpora- on the Gulf Coast. While only a handful of

HOW TO MAKE A tion) for Tier 4 tugs with Rolls Royce Z drives, to be those announced will likely make it to mar-

GOOD MOVE FORWARD equipped with Caterpillar engines, that would be used ket, those that do will require dedicated tug for ship assist and escort work. resources ensure timely loading and depar-

On the West Coast, Foss Maritime (which closed its tures and will create a new, niche market for

Since 2000, Steerprop has delivered more own West Coast yard in late 2018) has placed a four tug providers in this region.” than 750 azimuth propulsors to arctic, ofshore vessel order (with options for six additional vessels) for Still another trend worth watching is the and passenger vessels. Our solid track record tractor tugs to be built at Nicholls Brothers, also us- role of Americas Marine Highways (AMH), of references includes over 85 ice-class units ing a Jensen Z-drive design. The boats, which would an effort spearheaded by the U.S. Maritime and deliveries to 8 icebreakers.

be used, similarly, for harbor towing work, will be Administration to shift surface transporta-

Here are 16 reasons why customers choose us. equipped with MTU engines. tion onto the waterways. The latest round of

A good move to design the best vessel

Coast Guard: Stay Ahead of Inspections “If you have not already done so, the Coast applications currently being processed.”

Guard highly encourages you to make contact now with the local OCMI that will be conduct- 1st District: 36

A good move to successfully build a ship ing the vessel’s initial COI and schedule an in- 5th District: 27 spection date,” said Lt. Amy Midgett. “While we 7th District: 29 understand the dates may shift due to operational 8th District: 377 obligations, a tentative date will help the Coast 9th District: 17

Guard manage resources to ensure a marine in- 11th District: 5 spector is available. When scheduling an inspec- 13th District: 32 tion, indicate whether the vessel will be using the 14th District: 5

A good move for efcient operation and profitable ownership district, follow. In addition, there are 371 COI re A good move for your future www.steerprop.com

Meet us at our booth