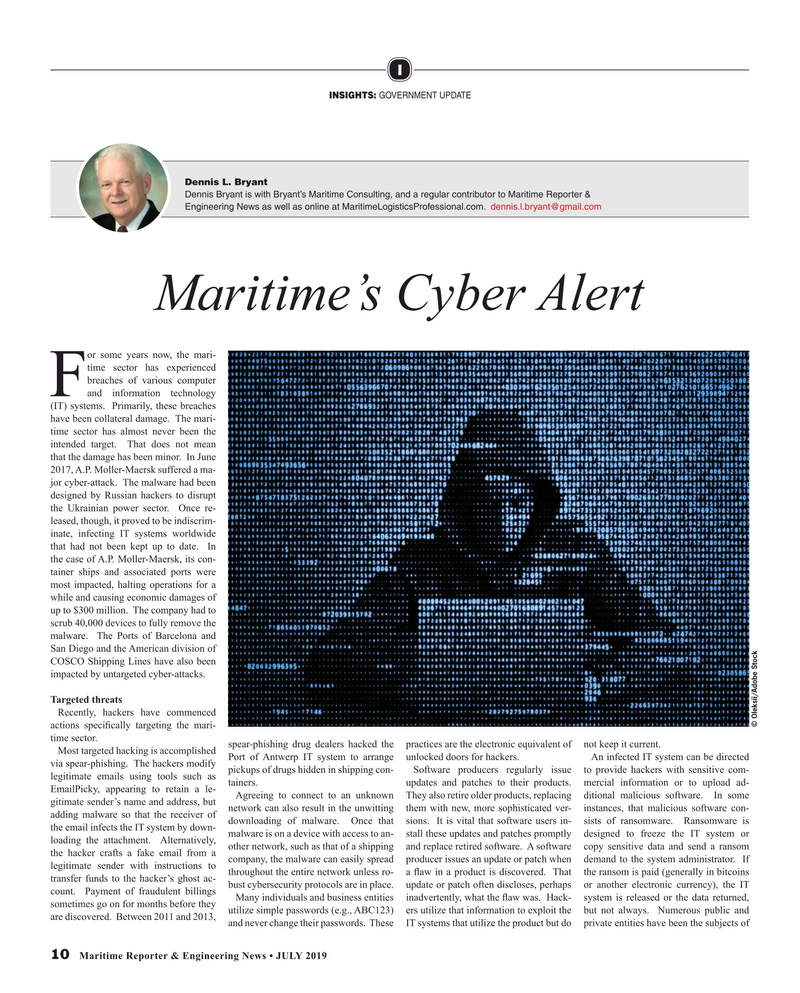 Dennis Bryant is with Bryant’s Maritime Consulting, and a regular contributor to Maritime Reporter &

Engineering News as well as online at MaritimeLogisticsProfessional.com. [email protected]

Fand information technology (IT) systems. Primarily, these breaches have been collateral damage. The mari- time sector has almost never been the intended target. That does not mean that the damage has been minor. In June 2017, A.P. Moller-Maersk suffered a ma- jor cyber-attack. The malware had been designed by Russian hackers to disrupt the Ukrainian power sector. Once re- leased, though, it proved to be indiscrim- inate, infecting IT systems worldwide that had not been kept up to date. In the case of A.P. Moller-Maersk, its con- tainer ships and associated ports were most impacted, halting operations for a while and causing economic damages of up to $300 million. The company had to scrub 40,000 devices to fully remove the malware. The Ports of Barcelona and

San Diego and the American division of

COSCO Shipping Lines have also been impacted by untargeted cyber-attacks.

Most targeted hacking is accomplished

Port of Antwerp IT system to arrange unlocked doors for hackers. An infected IT system can be directed via spear-phishing. The hackers modify legitimate emails using tools such as pickups of drugs hidden in shipping con- Software producers regularly issue to provide hackers with sensitive com- tainers. updates and patches to their products. mercial information or to upload ad-

EmailPicky, appearing to retain a le-

Agreeing to connect to an unknown They also retire older products, replacing ditional malicious software. In some gitimate sender’s name and address, but network can also result in the unwitting them with new, more sophisticated ver- instances, that malicious software con- adding malware so that the receiver of downloading of malware. Once that sions. It is vital that software users in- sists of ransomware. Ransomware is the email infects the IT system by down- loading the attachment. Alternatively, malware is on a device with access to an- stall these updates and patches promptly designed to freeze the IT system or the hacker crafts a fake email from a other network, such as that of a shipping and replace retired software. A software copy sensitive data and send a ransom legitimate sender with instructions to company, the malware can easily spread producer issues an update or patch when demand to the system administrator. If throughout the entire network unless ro- a ? aw in a product is discovered. That the ransom is paid (generally in bitcoins transfer funds to the hacker’s ghost ac- count. Payment of fraudulent billings bust cybersecurity protocols are in place. update or patch often discloses, perhaps or another electronic currency), the IT

Many individuals and business entities inadvertently, what the ? aw was. Hack- system is released or the data returned, sometimes go on for months before they utilize simple passwords (e.g., ABC123) ers utilize that information to exploit the but not always. Numerous public and are discovered. Between 2011 and 2013, and never change their passwords. These IT systems that utilize the product but do private entities have been the subjects of 10 Maritime Reporter & Engineering News • JULY 2019