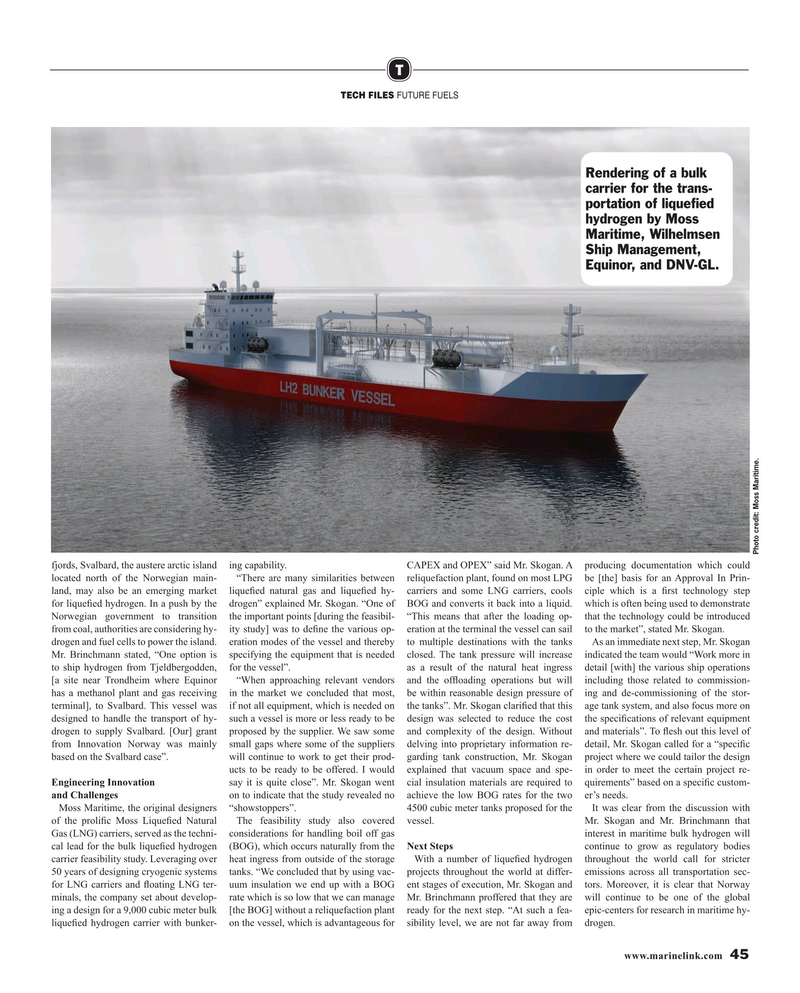 Rendering of a bulk carrier for the trans- portation of lique? ed hydrogen by Moss

fjords, Svalbard, the austere arctic island ing capability. CAPEX and OPEX” said Mr. Skogan. A producing documentation which could located north of the Norwegian main- “There are many similarities between reliquefaction plant, found on most LPG be [the] basis for an Approval In Prin- land, may also be an emerging market lique? ed natural gas and lique? ed hy- carriers and some LNG carriers, cools ciple which is a ? rst technology step for lique? ed hydrogen. In a push by the drogen” explained Mr. Skogan. “One of BOG and converts it back into a liquid. which is often being used to demonstrate

Norwegian government to transition the important points [during the feasibil- “This means that after the loading op- that the technology could be introduced from coal, authorities are considering hy- ity study] was to de? ne the various op- eration at the terminal the vessel can sail to the market”, stated Mr. Skogan.

drogen and fuel cells to power the island. eration modes of the vessel and thereby to multiple destinations with the tanks As an immediate next step, Mr. Skogan

Mr. Brinchmann stated, “One option is specifying the equipment that is needed closed. The tank pressure will increase indicated the team would “Work more in to ship hydrogen from Tjeldbergodden, for the vessel”. as a result of the natural heat ingress detail [with] the various ship operations [a site near Trondheim where Equinor “When approaching relevant vendors and the of? oading operations but will including those related to commission- has a methanol plant and gas receiving in the market we concluded that most, be within reasonable design pressure of ing and de-commissioning of the stor- terminal], to Svalbard. This vessel was if not all equipment, which is needed on the tanks”. Mr. Skogan clari? ed that this age tank system, and also focus more on designed to handle the transport of hy- such a vessel is more or less ready to be design was selected to reduce the cost the speci? cations of relevant equipment drogen to supply Svalbard. [Our] grant proposed by the supplier. We saw some and complexity of the design. Without and materials”. To ? esh out this level of from Innovation Norway was mainly small gaps where some of the suppliers delving into proprietary information re- detail, Mr. Skogan called for a “speci? c based on the Svalbard case”. will continue to work to get their prod- garding tank construction, Mr. Skogan project where we could tailor the design ucts to be ready to be offered. I would explained that vacuum space and spe- in order to meet the certain project re-

Engineering Innovation say it is quite close”. Mr. Skogan went cial insulation materials are required to quirements” based on a speci? c custom- and Challenges on to indicate that the study revealed no achieve the low BOG rates for the two er’s needs.

Moss Maritime, the original designers “showstoppers”. 4500 cubic meter tanks proposed for the It was clear from the discussion with of the proli? c Moss Lique? ed Natural The feasibility study also covered vessel. Mr. Skogan and Mr. Brinchmann that

Gas (LNG) carriers, served as the techni- considerations for handling boil off gas interest in maritime bulk hydrogen will cal lead for the bulk lique? ed hydrogen (BOG), which occurs naturally from the Next Steps continue to grow as regulatory bodies carrier feasibility study. Leveraging over heat ingress from outside of the storage With a number of lique? ed hydrogen throughout the world call for stricter 50 years of designing cryogenic systems tanks. “We concluded that by using vac- projects throughout the world at differ- emissions across all transportation sec- for LNG carriers and ? oating LNG ter- uum insulation we end up with a BOG ent stages of execution, Mr. Skogan and tors. Moreover, it is clear that Norway minals, the company set about develop- rate which is so low that we can manage Mr. Brinchmann proffered that they are will continue to be one of the global ing a design for a 9,000 cubic meter bulk [the BOG] without a reliquefaction plant ready for the next step. “At such a fea- epic-centers for research in maritime hy- lique? ed hydrogen carrier with bunker- on the vessel, which is advantageous for sibility level, we are not far away from drogen. www.marinelink.com 45