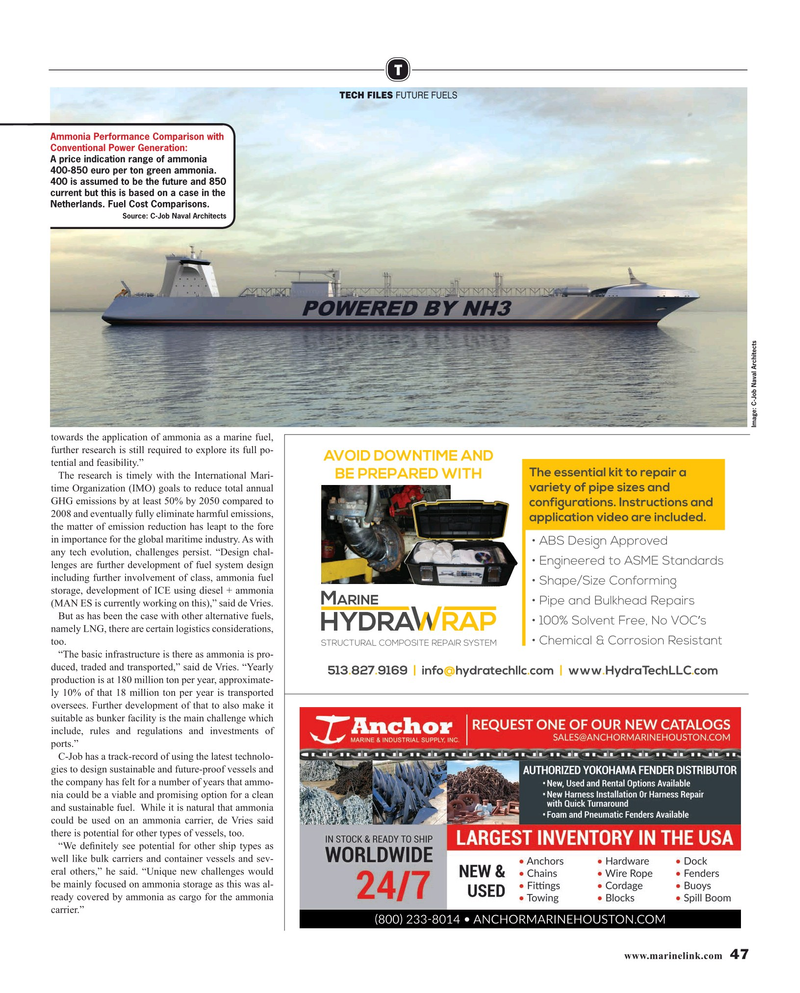 A price indication range of ammonia 400-850 euro per ton green ammonia. 400 is assumed to be the future and 850 current but this is based on a case in the

Image: C-Job Naval Architects towards the application of ammonia as a marine fuel, further research is still required to explore its full po- tential and feasibility.”

GHG emissions by at least 50% by 2050 compared to 2008 and eventually fully eliminate harmful emissions, the matter of emission reduction has leapt to the fore in importance for the global maritime industry. As with any tech evolution, challenges persist. “Design chal- lenges are further development of fuel system design including further involvement of class, ammonia fuel storage, development of ICE using diesel + ammonia (MAN ES is currently working on this),” said de Vries.

But as has been the case with other alternative fuels, namely LNG, there are certain logistics considerations, too. “The basic infrastructure is there as ammonia is pro- duced, traded and transported,” said de Vries. “Yearly production is at 180 million ton per year, approximate- ly 10% of that 18 million ton per year is transported oversees. Further development of that to also make it suitable as bunker facility is the main challenge which include, rules and regulations and investments of ports.”

C-Job has a track-record of using the latest technolo- gies to design sustainable and future-proof vessels and the company has felt for a number of years that ammo- nia could be a viable and promising option for a clean and sustainable fuel. While it is natural that ammonia could be used on an ammonia carrier, de Vries said there is potential for other types of vessels, too. “We de? nitely see potential for other ship types as well like bulk carriers and container vessels and sev- eral others,” he said. “Unique new challenges would be mainly focused on ammonia storage as this was al- ready covered by ammonia as cargo for the ammonia carrier.” www.marinelink.com 47