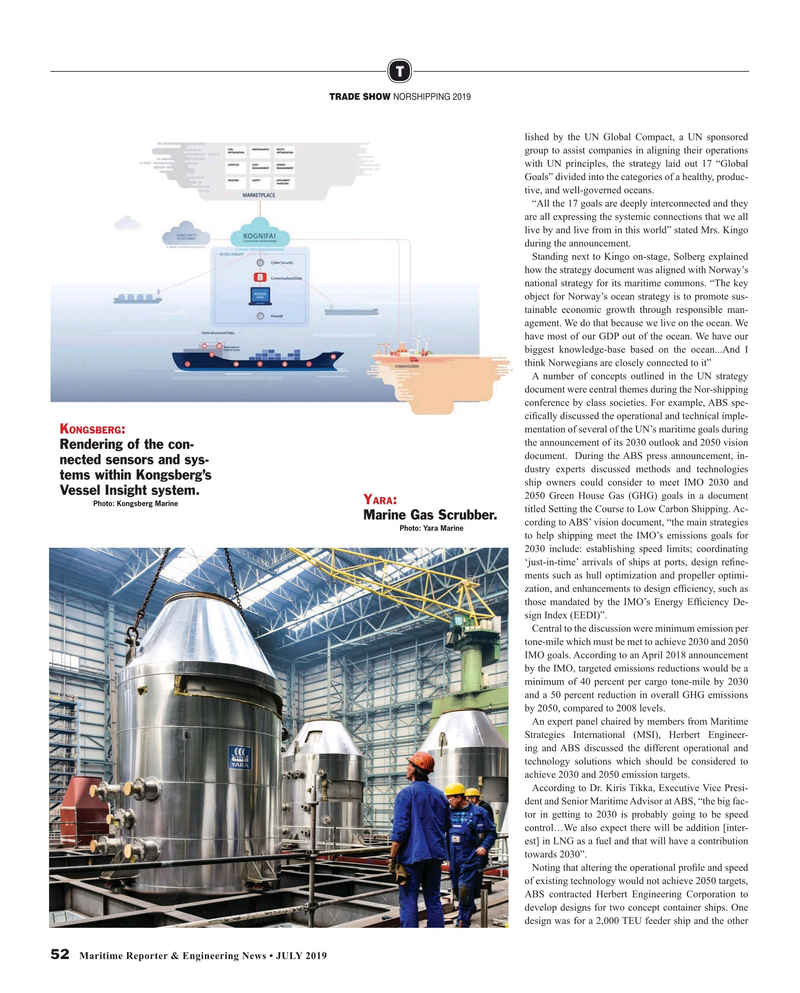 TRADE SHOW NORSHIPPING 2019 lished by the UN Global Compact, a UN sponsored group to assist companies in aligning their operations with UN principles, the strategy laid out 17 “Global

Goals” divided into the categories of a healthy, produc- tive, and well-governed oceans.

“All the 17 goals are deeply interconnected and they are all expressing the systemic connections that we all live by and live from in this world” stated Mrs. Kingo during the announcement.

Standing next to Kingo on-stage, Solberg explained how the strategy document was aligned with Norway’s national strategy for its maritime commons. “The key object for Norway’s ocean strategy is to promote sus- tainable economic growth through responsible man- agement. We do that because we live on the ocean. We have most of our GDP out of the ocean. We have our biggest knowledge-base based on the ocean...And I think Norwegians are closely connected to it”

A number of concepts outlined in the UN strategy document were central themes during the Nor-shipping conference by class societies. For example, ABS spe- ci? cally discussed the operational and technical imple- mentation of several of the UN’s maritime goals during

Rendering of the con- document. During the ABS press announcement, in- nected sensors and sys- dustry experts discussed methods and technologies tems within Kongsberg’s ship owners could consider to meet IMO 2030 and

Photo: Yara Marine to help shipping meet the IMO’s emissions goals for 2030 include: establishing speed limits; coordinating ‘just-in-time’ arrivals of ships at ports, design re? ne- ments such as hull optimization and propeller optimi- zation, and enhancements to design ef? ciency, such as those mandated by the IMO’s Energy Ef? ciency De- sign Index (EEDI)”.

IMO goals. According to an April 2018 announcement by the IMO, targeted emissions reductions would be a minimum of 40 percent per cargo tone-mile by 2030 and a 50 percent reduction in overall GHG emissions by 2050, compared to 2008 levels.

An expert panel chaired by members from Maritime

Strategies International (MSI), Herbert Engineer- ing and ABS discussed the different operational and technology solutions which should be considered to achieve 2030 and 2050 emission targets.

According to Dr. Kiris Tikka, Executive Vice Presi- dent and Senior Maritime Advisor at ABS, “the big fac- tor in getting to 2030 is probably going to be speed control…We also expect there will be addition [inter- est] in LNG as a fuel and that will have a contribution towards 2030”.

Noting that altering the operational pro? le and speed of existing technology would not achieve 2050 targets,

ABS contracted Herbert Engineering Corporation to develop designs for two concept container ships. One design was for a 2,000 TEU feeder ship and the other 52 Maritime Reporter & Engineering News • JULY 2019