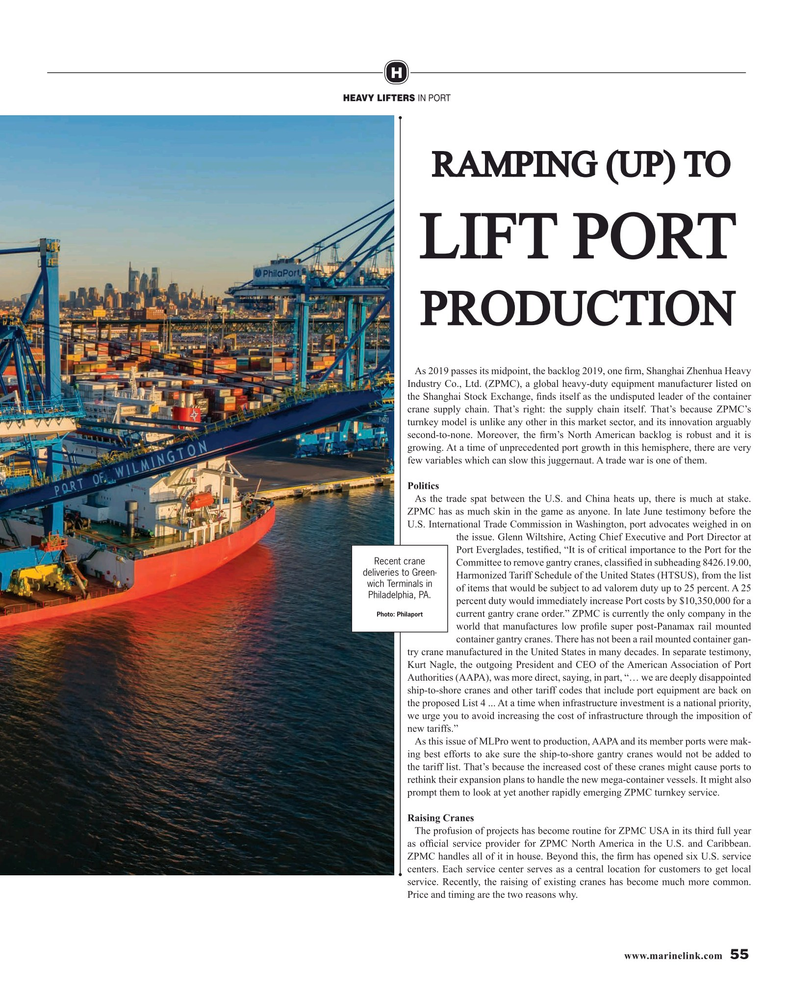 Industry Co., Ltd. (ZPMC), a global heavy-duty equipment manufacturer listed on the Shanghai Stock Exchange, ? nds itself as the undisputed leader of the container crane supply chain. That’s right: the supply chain itself. That’s because ZPMC’s turnkey model is unlike any other in this market sector, and its innovation arguably second-to-none. Moreover, the ? rm’s North American backlog is robust and it is growing. At a time of unprecedented port growth in this hemisphere, there are very few variables which can slow this juggernaut. A trade war is one of them.

As the trade spat between the U.S. and China heats up, there is much at stake.

ZPMC has as much skin in the game as anyone. In late June testimony before the

Port Everglades, testi? ed, “It is of critical importance to the Port for the

Harmonized Tariff Schedule of the United States (HTSUS), from the list wich Terminals in of items that would be subject to ad valorem duty up to 25 percent. A 25

Philadelphia, PA. percent duty would immediately increase Port costs by $10,350,000 for a

Kurt Nagle, the outgoing President and CEO of the American Association of Port

Authorities (AAPA), was more direct, saying, in part, “… we are deeply disappointed ship-to-shore cranes and other tariff codes that include port equipment are back on the proposed List 4 ... At a time when infrastructure investment is a national priority, we urge you to avoid increasing the cost of infrastructure through the imposition of new tariffs.”

As this issue of MLPro went to production, AAPA and its member ports were mak- ing best efforts to ake sure the ship-to-shore gantry cranes would not be added to the tariff list. That’s because the increased cost of these cranes might cause ports to rethink their expansion plans to handle the new mega-container vessels. It might also prompt them to look at yet another rapidly emerging ZPMC turnkey service.

The profusion of projects has become routine for ZPMC USA in its third full year as of? cial service provider for ZPMC North America in the U.S. and Caribbean.

ZPMC handles all of it in house. Beyond this, the ? rm has opened six U.S. service centers. Each service center serves as a central location for customers to get local service. Recently, the raising of existing cranes has become much more common.

Price and timing are the two reasons why.