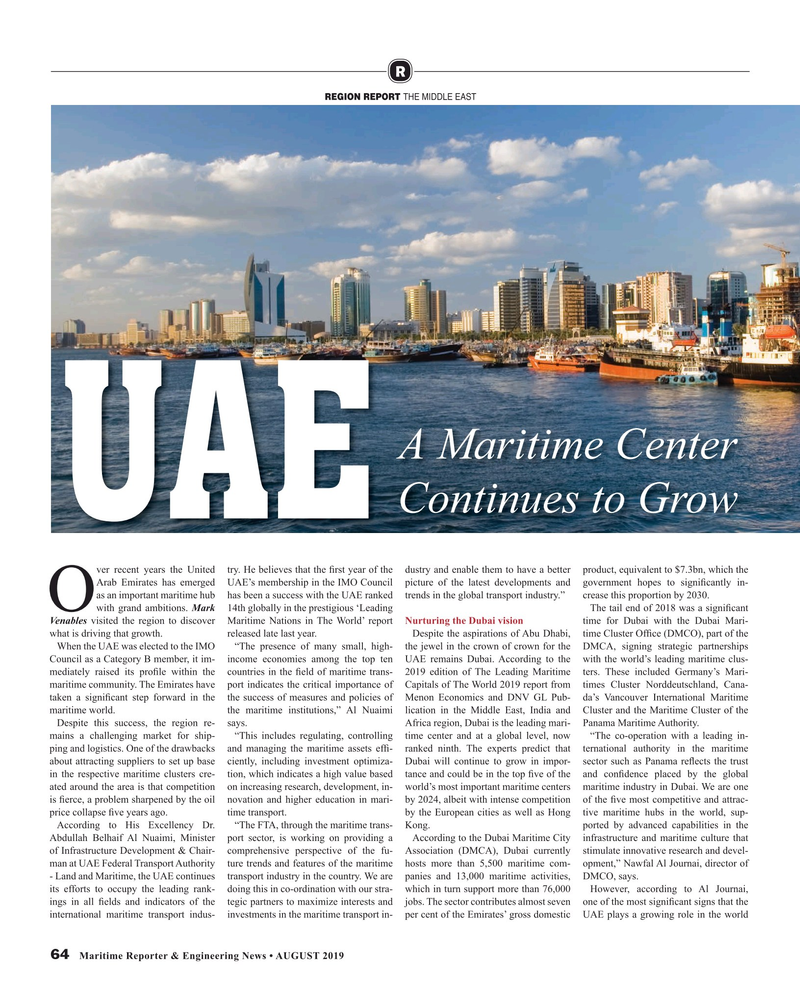 UAE ver recent years the United try. He believes that the ? rst year of the dustry and enable them to have a better product, equivalent to $7.3bn, which the

Arab Emirates has emerged UAE’s membership in the IMO Council picture of the latest developments and government hopes to signi? cantly in- as an important maritime hub has been a success with the UAE ranked trends in the global transport industry.” crease this proportion by 2030.

Owith grand ambitions. Mark 14th globally in the prestigious ‘Leading The tail end of 2018 was a signi? cant

Venables visited the region to discover Maritime Nations in The World’ report Nurturing the Dubai vision time for Dubai with the Dubai Mari- what is driving that growth. released late last year. Despite the aspirations of Abu Dhabi, time Cluster Of? ce (DMCO), part of the

When the UAE was elected to the IMO “The presence of many small, high- the jewel in the crown of crown for the DMCA, signing strategic partnerships

Council as a Category B member, it im- income economies among the top ten UAE remains Dubai. According to the with the world’s leading maritime clus- mediately raised its pro? le within the countries in the ? eld of maritime trans- 2019 edition of The Leading Maritime ters. These included Germany’s Mari- maritime community. The Emirates have port indicates the critical importance of Capitals of The World 2019 report from times Cluster Norddeutschland, Cana- taken a signi? cant step forward in the the success of measures and policies of Menon Economics and DNV GL Pub- da’s Vancouver International Maritime maritime world. the maritime institutions,” Al Nuaimi lication in the Middle East, India and Cluster and the Maritime Cluster of the

Despite this success, the region re- says. Africa region, Dubai is the leading mari- Panama Maritime Authority.

mains a challenging market for ship- “This includes regulating, controlling time center and at a global level, now “The co-operation with a leading in- ping and logistics. One of the drawbacks and managing the maritime assets ef? - ranked ninth. The experts predict that ternational authority in the maritime about attracting suppliers to set up base ciently, including investment optimiza- Dubai will continue to grow in impor- sector such as Panama re? ects the trust in the respective maritime clusters cre- tion, which indicates a high value based tance and could be in the top ? ve of the and con? dence placed by the global ated around the area is that competition on increasing research, development, in- world’s most important maritime centers maritime industry in Dubai. We are one is ? erce, a problem sharpened by the oil novation and higher education in mari- by 2024, albeit with intense competition of the ? ve most competitive and attrac- price collapse ? ve years ago. time transport. by the European cities as well as Hong tive maritime hubs in the world, sup-

According to His Excellency Dr. “The FTA, through the maritime trans- Kong. ported by advanced capabilities in the

its efforts to occupy the leading rank- doing this in co-ordination with our stra- which in turn support more than 76,000 However, according to Al Journai, ings in all ? elds and indicators of the tegic partners to maximize interests and jobs. The sector contributes almost seven one of the most signi? cant signs that the international maritime transport indus- investments in the maritime transport in- per cent of the Emirates’ gross domestic UAE plays a growing role in the world 64 Maritime Reporter & Engineering News • AUGUST 2019