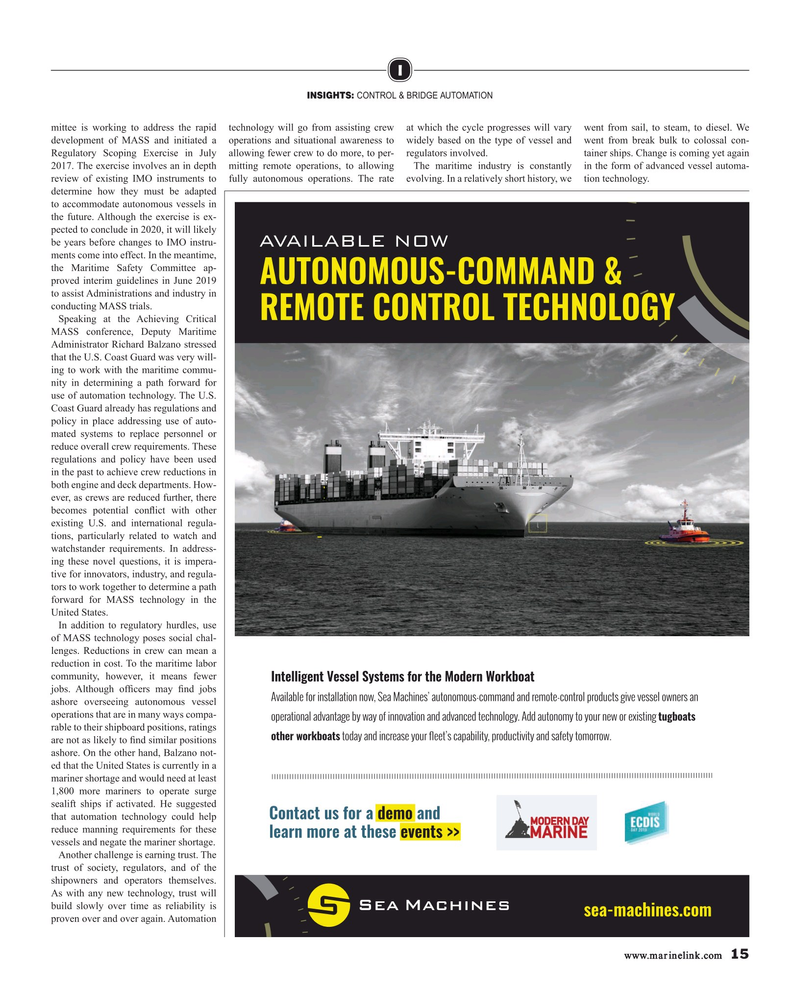 INSIGHTS: CONTROL & BRIDGE AUTOMATION mittee is working to address the rapid technology will go from assisting crew at which the cycle progresses will vary went from sail, to steam, to diesel. We development of MASS and initiated a operations and situational awareness to widely based on the type of vessel and went from break bulk to colossal con-

Regulatory Scoping Exercise in July allowing fewer crew to do more, to per- regulators involved. tainer ships. Change is coming yet again 2017. The exercise involves an in depth mitting remote operations, to allowing The maritime industry is constantly in the form of advanced vessel automa- review of existing IMO instruments to fully autonomous operations. The rate evolving. In a relatively short history, we tion technology.

determine how they must be adapted to accommodate autonomous vessels in the future. Although the exercise is ex- pected to conclude in 2020, it will likely be years before changes to IMO instru-

AUTONOMOUS-COMMAND & to assist Administrations and industry in conducting MASS trials.

Speaking at the Achieving Critical

Administrator Richard Balzano stressed that the U.S. Coast Guard was very will- ing to work with the maritime commu- nity in determining a path forward for use of automation technology. The U.S.

Coast Guard already has regulations and policy in place addressing use of auto- mated systems to replace personnel or reduce overall crew requirements. These regulations and policy have been used in the past to achieve crew reductions in both engine and deck departments. How- ever, as crews are reduced further, there becomes potential con? ict with other existing U.S. and international regula- tions, particularly related to watch and watchstander requirements. In address- ing these novel questions, it is impera- tive for innovators, industry, and regula- tors to work together to determine a path forward for MASS technology in the

In addition to regulatory hurdles, use of MASS technology poses social chal- lenges. Reductions in crew can mean a reduction in cost. To the maritime labor community, however, it means fewer

Intelligent Vessel Systems for the Modern Workboat jobs. Although of? cers may ? nd jobs

Available for installation now, Sea Machines’ autonomous-command and remote-control products give vessel owners an ashore overseeing autonomous vessel operations that are in many ways compa- operational advantage by way of innovation and advanced technology. Add autonomy to your new or existing tugboats rable to their shipboard positions, ratings other workboatsWRGD\DQGLQFUHDVH\RXU?HHWÐVFDSDELOLW\SURGXFWLYLW\DQGVDIHW\WRPRUURZ are not as likely to ? nd similar positions ashore. On the other hand, Balzano not- ed that the United States is currently in a mariner shortage and would need at least 1,800 more mariners to operate surge sealift ships if activated. He suggested

Contact us for a demo and that automation technology could help reduce manning requirements for these learn more at these events >> vessels and negate the mariner shortage.

Another challenge is earning trust. The trust of society, regulators, and of the shipowners and operators themselves.

As with any new technology, trust will build slowly over time as reliability is