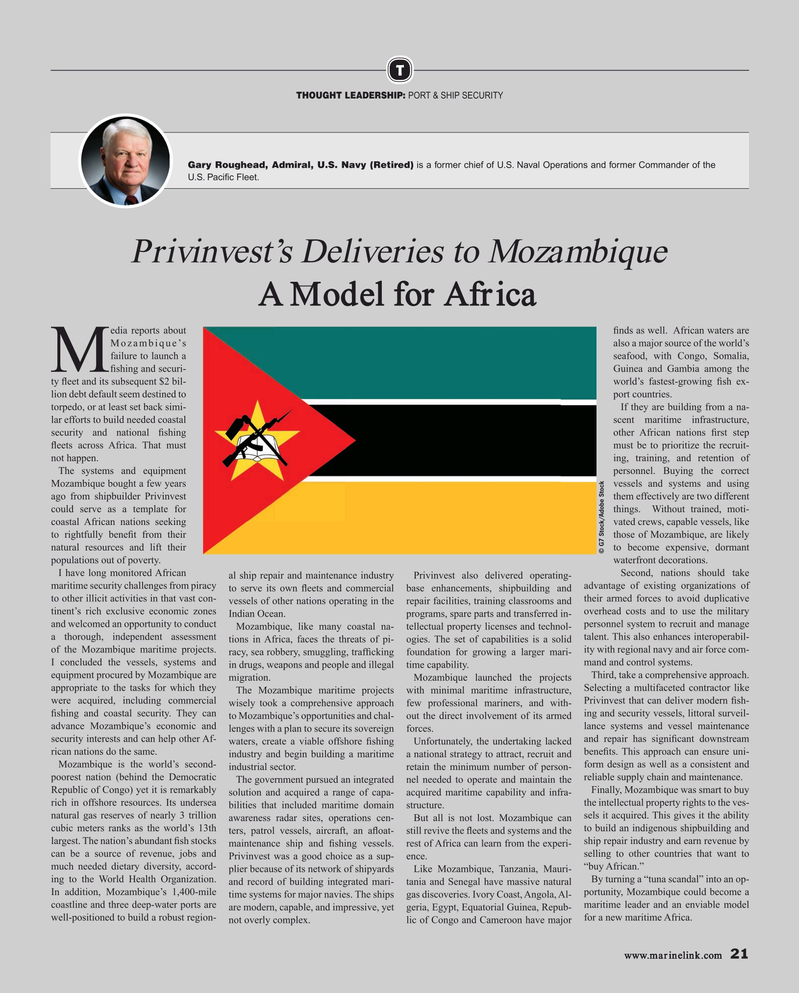 Gary Roughead, Admiral, U.S. Navy (Retired) is a former chief of U.S. Naval Operations and former Commander of the

A Model for Africa edia reports about ? nds as well. African waters are

Mozambique’s also a major source of the world’s failure to launch a seafood, with Congo, Somalia,

torpedo, or at least set back simi- If they are building from a na- lar efforts to build needed coastal scent maritime infrastructure, security and national ? shing other African nations ? rst step ? eets across Africa. That must must be to prioritize the recruit- not happen. ing, training, and retention of

The systems and equipment personnel. Buying the correct

Mozambique bought a few years vessels and systems and using ago from shipbuilder Privinvest them effectively are two different could serve as a template for things. Without trained, moti- coastal African nations seeking vated crews, capable vessels, like to rightfully bene? t from their those of Mozambique, are likely natural resources and lift their to become expensive, dormant © G7 Stock/Adobe Stock populations out of poverty. waterfront decorations.

I have long monitored African Second, nations should take al ship repair and maintenance industry Privinvest also delivered operating- maritime security challenges from piracy to serve its own ? eets and commercial base enhancements, shipbuilding and advantage of existing organizations of to other illicit activities in that vast con- vessels of other nations operating in the repair facilities, training classrooms and their armed forces to avoid duplicative tinent’s rich exclusive economic zones Indian Ocean. programs, spare parts and transferred in- overhead costs and to use the military and welcomed an opportunity to conduct personnel system to recruit and manage

Mozambique, like many coastal na- tellectual property licenses and technol- a thorough, independent assessment tions in Africa, faces the threats of pi- ogies. The set of capabilities is a solid talent. This also enhances interoperabil- of the Mozambique maritime projects. racy, sea robbery, smuggling, traf? cking foundation for growing a larger mari- ity with regional navy and air force com-

I concluded the vessels, systems and in drugs, weapons and people and illegal time capability.

equipment procured by Mozambique are migration. Mozambique launched the projects

Privinvest that can deliver modern ? sh- ? shing and coastal security. They can to Mozambique’s opportunities and chal- out the direct involvement of its armed ing and security vessels, littoral surveil- advance Mozambique’s economic and lenges with a plan to secure its sovereign forces.

lance systems and vessel maintenance security interests and can help other Af- Unfortunately, the undertaking lacked and repair has signi? cant downstream waters, create a viable offshore ? shing rican nations do the same. industry and begin building a maritime a national strategy to attract, recruit and bene? ts. This approach can ensure uni-

Mozambique is the world’s second- form design as well as a consistent and industrial sector. retain the minimum number of person- poorest nation (behind the Democratic The government pursued an integrated nel needed to operate and maintain the reliable supply chain and maintenance.

the intellectual property rights to the ves- natural gas reserves of nearly 3 trillion awareness radar sites, operations cen- But all is not lost. Mozambique can sels it acquired. This gives it the ability cubic meters ranks as the world’s 13th ters, patrol vessels, aircraft, an a? oat- still revive the ? eets and systems and the to build an indigenous shipbuilding and largest. The nation’s abundant ? sh stocks maintenance ship and ? shing vessels. rest of Africa can learn from the experi- ship repair industry and earn revenue by can be a source of revenue, jobs and Privinvest was a good choice as a sup- ence. selling to other countries that want to much needed dietary diversity, accord- “buy African.” plier because of its network of shipyards Like Mozambique, Tanzania, Mauri- ing to the World Health Organization. and record of building integrated mari- tania and Senegal have massive natural

By turning a “tuna scandal” into an op-

In addition, Mozambique’s 1,400-mile time systems for major navies. The ships gas discoveries. Ivory Coast, Angola, Al- portunity, Mozambique could become a coastline and three deep-water ports are are modern, capable, and impressive, yet geria, Egypt, Equatorial Guinea, Repub- maritime leader and an enviable model well-positioned to build a robust region- lic of Congo and Cameroon have major for a new maritime Africa.