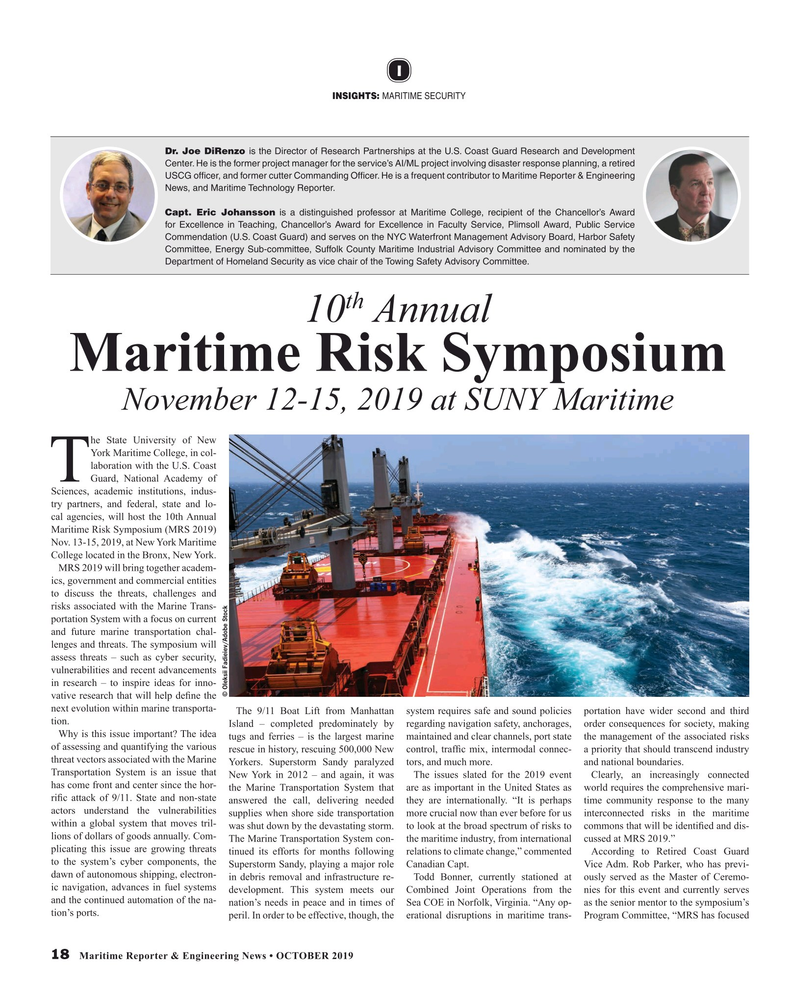 Dr. Joe DiRenzo is the Director of Research Partnerships at the U.S. Coast Guard Research and Development

Center. He is the former project manager for the service’s AI/ML project involving disaster response planning, a retired

USCG of? cer, and former cutter Commanding Of? cer. He is a frequent contributor to Maritime Reporter & Engineering

York Maritime College, in col- laboration with the U.S. Coast

MRS 2019 will bring together academ- ics, government and commercial entities to discuss the threats, challenges and risks associated with the Marine Trans- portation System with a focus on current and future marine transportation chal- lenges and threats. The symposium will assess threats – such as cyber security, vulnerabilities and recent advancements in research – to inspire ideas for inno- © Oleksii Fadieiev/Adobe Stock vative research that will help de? ne the next evolution within marine transporta-

Why is this issue important? The idea tugs and ferries – is the largest marine maintained and clear channels, port state the management of the associated risks of assessing and quantifying the various rescue in history, rescuing 500,000 New control, traf? c mix, intermodal connec- a priority that should transcend industry threat vectors associated with the Marine

Transportation System is an issue that New York in 2012 – and again, it was The issues slated for the 2019 event Clearly, an increasingly connected has come front and center since the hor- the Marine Transportation System that are as important in the United States as world requires the comprehensive mari- ri? c attack of 9/11. State and non-state answered the call, delivering needed they are internationally. “It is perhaps time community response to the many actors understand the vulnerabilities supplies when shore side transportation more crucial now than ever before for us interconnected risks in the maritime within a global system that moves tril- was shut down by the devastating storm. to look at the broad spectrum of risks to commons that will be identi? ed and dis- lions of dollars of goods annually. Com-

The Marine Transportation System con- the maritime industry, from international cussed at MRS 2019.” plicating this issue are growing threats tinued its efforts for months following relations to climate change,” commented According to Retired Coast Guard to the system’s cyber components, the Superstorm Sandy, playing a major role Canadian Capt. Vice Adm. Rob Parker, who has previ- dawn of autonomous shipping, electron- in debris removal and infrastructure re- Todd Bonner, currently stationed at ously served as the Master of Ceremo- ic navigation, advances in fuel systems development. This system meets our Combined Joint Operations from the nies for this event and currently serves and the continued automation of the na- nation’s needs in peace and in times of Sea COE in Norfolk, Virginia. “Any op- as the senior mentor to the symposium’s tion’s ports. peril. In order to be effective, though, the erational disruptions in maritime trans- Program Committee, “MRS has focused 18 Maritime Reporter & Engineering News • OCTOBER 2019