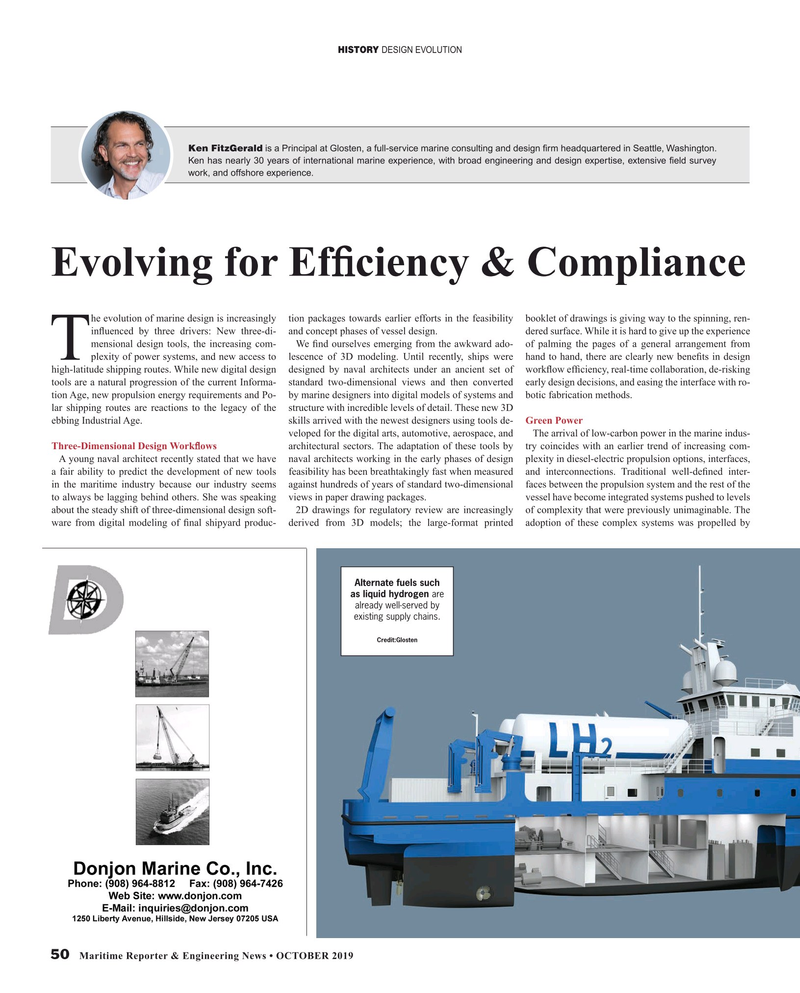 Ken FitzGerald is a Principal at Glosten, a full-service marine consulting and design ? rm headquartered in Seattle, Washington.

Evolving for Ef? ciency & Compliance he evolution of marine design is increasingly tion packages towards earlier efforts in the feasibility booklet of drawings is giving way to the spinning, ren- in? uenced by three drivers: New three-di- and concept phases of vessel design. dered surface. While it is hard to give up the experience mensional design tools, the increasing com- We ? nd ourselves emerging from the awkward ado- of palming the pages of a general arrangement from

Tplexity of power systems, and new access to lescence of 3D modeling. Until recently, ships were hand to hand, there are clearly new bene? ts in design high-latitude shipping routes. While new digital design designed by naval architects under an ancient set of work? ow ef? ciency, real-time collaboration, de-risking tools are a natural progression of the current Informa- standard two-dimensional views and then converted early design decisions, and easing the interface with ro- tion Age, new propulsion energy requirements and Po- by marine designers into digital models of systems and botic fabrication methods.

lar shipping routes are reactions to the legacy of the structure with incredible levels of detail. These new 3D ebbing Industrial Age. skills arrived with the newest designers using tools de- Green Power veloped for the digital arts, automotive, aerospace, and The arrival of low-carbon power in the marine indus-

Three-Dimensional Design Work? ows architectural sectors. The adaptation of these tools by try coincides with an earlier trend of increasing com-

A young naval architect recently stated that we have naval architects working in the early phases of design plexity in diesel-electric propulsion options, interfaces, a fair ability to predict the development of new tools feasibility has been breathtakingly fast when measured and interconnections. Traditional well-de? ned inter- in the maritime industry because our industry seems against hundreds of years of standard two-dimensional faces between the propulsion system and the rest of the to always be lagging behind others. She was speaking views in paper drawing packages. vessel have become integrated systems pushed to levels about the steady shift of three-dimensional design soft- 2D drawings for regulatory review are increasingly of complexity that were previously unimaginable. The ware from digital modeling of ? nal shipyard produc- derived from 3D models; the large-format printed adoption of these complex systems was propelled by

Alternate fuels such as liquid hydrogen are already well-served by existing supply chains.