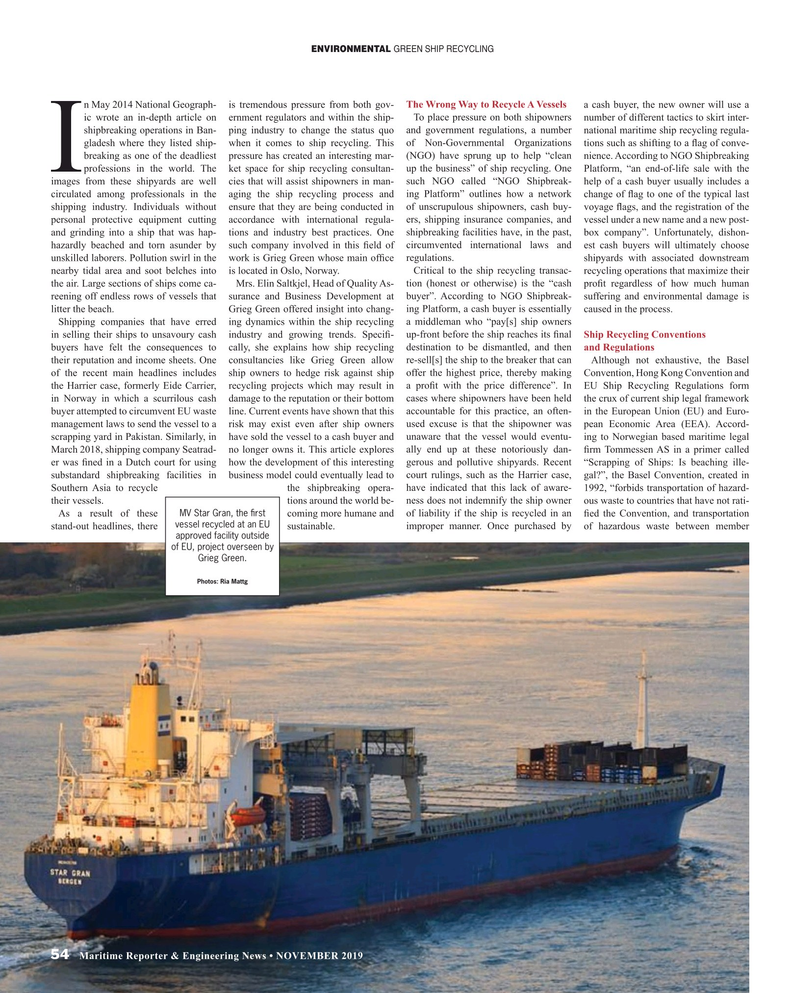 ENVIRONMENTAL GREEN SHIP RECYCLING n May 2014 National Geograph- is tremendous pressure from both gov- The Wrong Way to Recycle A Vessels a cash buyer, the new owner will use a ic wrote an in-depth article on ernment regulators and within the ship- To place pressure on both shipowners number of different tactics to skirt inter- shipbreaking operations in Ban- ping industry to change the status quo and government regulations, a number national maritime ship recycling regula- gladesh where they listed ship- when it comes to ship recycling. This of Non-Governmental Organizations tions such as shifting to a ? ag of conve- breaking as one of the deadliest pressure has created an interesting mar- (NGO) have sprung up to help “clean nience. According to NGO Shipbreaking professions in the world. The ket space for ship recycling consultan- up the business” of ship recycling. One Platform, “an end-of-life sale with the

I images from these shipyards are well cies that will assist shipowners in man- such NGO called “NGO Shipbreak- help of a cash buyer usually includes a circulated among professionals in the aging the ship recycling process and ing Platform” outlines how a network change of ? ag to one of the typical last shipping industry. Individuals without ensure that they are being conducted in of unscrupulous shipowners, cash buy- voyage ? ags, and the registration of the personal protective equipment cutting accordance with international regula- ers, shipping insurance companies, and vessel under a new name and a new post- and grinding into a ship that was hap- tions and industry best practices. One shipbreaking facilities have, in the past, box company”. Unfortunately, dishon- hazardly beached and torn asunder by such company involved in this ? eld of circumvented international laws and est cash buyers will ultimately choose unskilled laborers. Pollution swirl in the work is Grieg Green whose main of? ce regulations. shipyards with associated downstream nearby tidal area and soot belches into is located in Oslo, Norway. Critical to the ship recycling transac- recycling operations that maximize their the air. Large sections of ships come ca- Mrs. Elin Saltkjel, Head of Quality As- tion (honest or otherwise) is the “cash pro? t regardless of how much human reening off endless rows of vessels that surance and Business Development at buyer”. According to NGO Shipbreak- suffering and environmental damage is litter the beach. Grieg Green offered insight into chang- ing Platform, a cash buyer is essentially caused in the process.

Shipping companies that have erred ing dynamics within the ship recycling a middleman who “pay[s] ship owners in selling their ships to unsavoury cash industry and growing trends. Speci? - up-front before the ship reaches its ? nal Ship Recycling Conventions buyers have felt the consequences to cally, she explains how ship recycling destination to be dismantled, and then and Regulations their reputation and income sheets. One consultancies like Grieg Green allow re-sell[s] the ship to the breaker that can Although not exhaustive, the Basel of the recent main headlines includes ship owners to hedge risk against ship offer the highest price, thereby making Convention, Hong Kong Convention and the Harrier case, formerly Eide Carrier, recycling projects which may result in a pro? t with the price difference”. In EU Ship Recycling Regulations form in Norway in which a scurrilous cash damage to the reputation or their bottom cases where shipowners have been held the crux of current ship legal framework buyer attempted to circumvent EU waste line. Current events have shown that this accountable for this practice, an often- in the European Union (EU) and Euro- management laws to send the vessel to a risk may exist even after ship owners used excuse is that the shipowner was pean Economic Area (EEA). Accord- scrapping yard in Pakistan. Similarly, in have sold the vessel to a cash buyer and unaware that the vessel would eventu- ing to Norwegian based maritime legal

March 2018, shipping company Seatrad- no longer owns it. This article explores ally end up at these notoriously dan- ? rm Tommessen AS in a primer called er was ? ned in a Dutch court for using how the development of this interesting gerous and pollutive shipyards. Recent “Scrapping of Ships: Is beaching ille- substandard shipbreaking facilities in business model could eventually lead to court rulings, such as the Harrier case, gal?”, the Basel Convention, created in

Southern Asia to recycle the shipbreaking opera- have indicated that this lack of aware- 1992, “forbids transportation of hazard- their vessels. tions around the world be- ness does not indemnify the ship owner ous waste to countries that have not rati-

As a result of these coming more humane and of liability if the ship is recycled in an ? ed the Convention, and transportation vessel recycled at an EU stand-out headlines, there sustainable. improper manner. Once purchased by of hazardous waste between member approved facility outside of EU, project overseen by