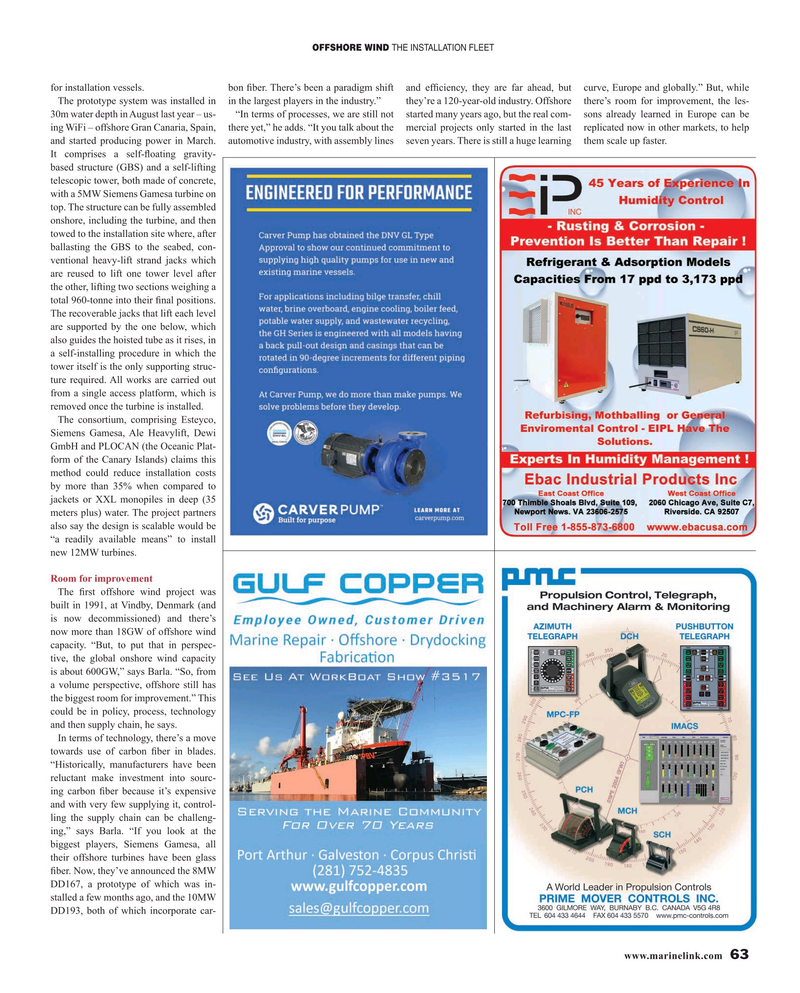 OFFSHORE WIND THE INSTALLATION FLEET for installation vessels. bon ? ber. There’s been a paradigm shift and ef? ciency, they are far ahead, but curve, Europe and globally.” But, while

The prototype system was installed in in the largest players in the industry.” they’re a 120-year-old industry. Offshore there’s room for improvement, the les- 30m water depth in August last year – us- “In terms of processes, we are still not started many years ago, but the real com- sons already learned in Europe can be ing WiFi – offshore Gran Canaria, Spain, there yet,” he adds. “It you talk about the mercial projects only started in the last replicated now in other markets, to help and started producing power in March. automotive industry, with assembly lines seven years. There is still a huge learning them scale up faster.

It comprises a self-? oating gravity- based structure (GBS) and a self-lifting telescopic tower, both made of concrete, with a 5MW Siemens Gamesa turbine on top. The structure can be fully assembled onshore, including the turbine, and then towed to the installation site where, after ballasting the GBS to the seabed, con- ventional heavy-lift strand jacks which are reused to lift one tower level after the other, lifting two sections weighing a total 960-tonne into their ? nal positions.

The recoverable jacks that lift each level are supported by the one below, which also guides the hoisted tube as it rises, in a self-installing procedure in which the tower itself is the only supporting struc- ture required. All works are carried out from a single access platform, which is removed once the turbine is installed.

GmbH and PLOCAN (the Oceanic Plat- form of the Canary Islands) claims this method could reduce installation costs by more than 35% when compared to jackets or XXL monopiles in deep (35 meters plus) water. The project partners also say the design is scalable would be “a readily available means” to install new 12MW turbines.

The ? rst offshore wind project was built in 1991, at Vindby, Denmark (and is now decommissioned) and there’s now more than 18GW of offshore wind capacity. “But, to put that in perspec- tive, the global onshore wind capacity is about 600GW,” says Barla. “So, from a volume perspective, offshore still has the biggest room for improvement.” This could be in policy, process, technology and then supply chain, he says.

In terms of technology, there’s a move towards use of carbon ? ber in blades. “Historically, manufacturers have been reluctant make investment into sourc- ing carbon ? ber because it’s expensive and with very few supplying it, control- ling the supply chain can be challeng- ing,” says Barla. “If you look at the biggest players, Siemens Gamesa, all their offshore turbines have been glass ? ber. Now, they’ve announced the 8MW

DD167, a prototype of which was in- stalled a few months ago, and the 10MW

DD193, both of which incorporate car- www.marinelink.com 63