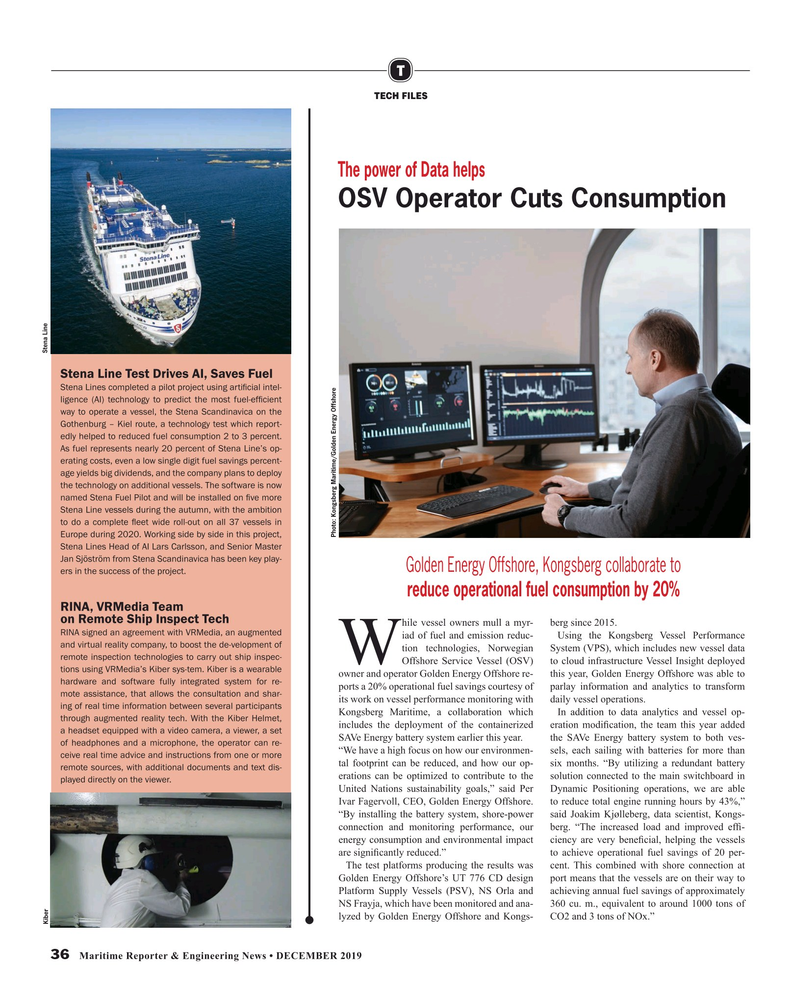 The power of Data helps

Stena Lines completed a pilot project using arti? cial intel- ligence (AI) technology to predict the most fuel-ef? cient way to operate a vessel, the Stena Scandinavica on the

As fuel represents nearly 20 percent of Stena Line’s op- erating costs, even a low single digit fuel savings percent- age yields big dividends, and the company plans to deploy the technology on additional vessels. The software is now named Stena Fuel Pilot and will be installed on ? ve more

Stena Line vessels during the autumn, with the ambition to do a complete ? eet wide roll-out on all 37 vessels in

Europe during 2020. Working side by side in this project,

Jan Sjöström from Stena Scandinavica has been key play-

Golden Energy Offshore, Kongsberg collaborate to ers in the success of the project. reduce operational fuel consumption by 20%

Kongsberg Maritime, a collaboration which In addition to data analytics and vessel op- through augmented reality tech. With the Kiber Helmet, includes the deployment of the containerized eration modi? cation, the team this year added a headset equipped with a video camera, a viewer, a set

SAVe Energy battery system earlier this year. the SAVe Energy battery system to both ves- of headphones and a microphone, the operator can re- “We have a high focus on how our environmen- sels, each sailing with batteries for more than ceive real time advice and instructions from one or more tal footprint can be reduced, and how our op- six months. “By utilizing a redundant battery remote sources, with additional documents and text dis- erations can be optimized to contribute to the solution connected to the main switchboard in played directly on the viewer.

The test platforms producing the results was cent. This combined with shore connection at

NS Frayja, which have been monitored and ana- 360 cu. m., equivalent to around 1000 tons of lyzed by Golden Energy Offshore and Kongs- CO2 and 3 tons of NOx.”