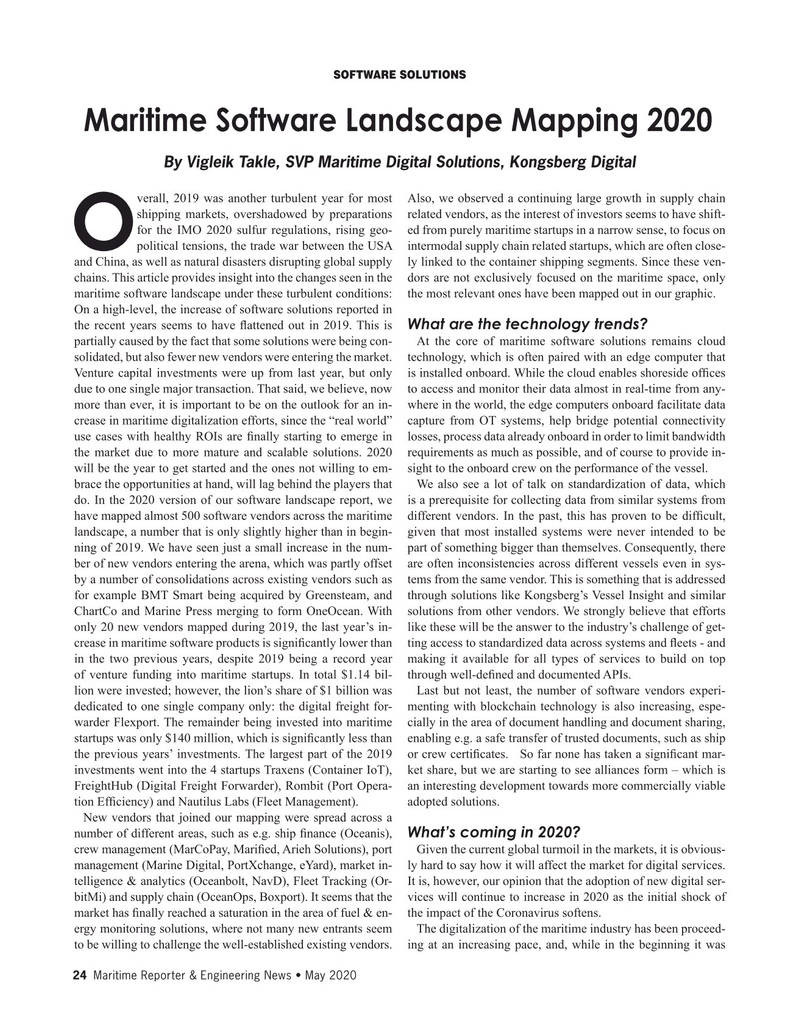 By Vigleik Takle, SVP Maritime Digital Solutions, Kongsberg Digital verall, 2019 was another turbulent year for most Also, we observed a continuing large growth in supply chain shipping markets, overshadowed by preparations related vendors, as the interest of investors seems to have shift- for the IMO 2020 sulfur regulations, rising geo- ed from purely maritime startups in a narrow sense, to focus on

Opolitical tensions, the trade war between the USA intermodal supply chain related startups, which are often close- and China, as well as natural disasters disrupting global supply ly linked to the container shipping segments. Since these ven- chains. This article provides insight into the changes seen in the dors are not exclusively focused on the maritime space, only maritime software landscape under these turbulent conditions: the most relevant ones have been mapped out in our graphic.

On a high-level, the increase of software solutions reported in the recent years seems to have fattened out in 2019. This is What are the technology trends?

partially caused by the fact that some solutions were being con- At the core of maritime software solutions remains cloud solidated, but also fewer new vendors were entering the market. technology, which is often paired with an edge computer that

Venture capital investments were up from last year, but only is installed onboard. While the cloud enables shoreside offces due to one single major transaction. That said, we believe, now to access and monitor their data almost in real-time from any- more than ever, it is important to be on the outlook for an in- where in the world, the edge computers onboard facilitate data crease in maritime digitalization efforts, since the “real world” capture from OT systems, help bridge potential connectivity use cases with healthy ROIs are fnally starting to emerge in losses, process data already onboard in order to limit bandwidth the market due to more mature and scalable solutions. 2020 requirements as much as possible, and of course to provide in- will be the year to get started and the ones not willing to em- sight to the onboard crew on the performance of the vessel.

brace the opportunities at hand, will lag behind the players that We also see a lot of talk on standardization of data, which do. In the 2020 version of our software landscape report, we is a prerequisite for collecting data from similar systems from have mapped almost 500 software vendors across the maritime different vendors. In the past, this has proven to be diffcult, landscape, a number that is only slightly higher than in begin- given that most installed systems were never intended to be ning of 2019. We have seen just a small increase in the num- part of something bigger than themselves. Consequently, there ber of new vendors entering the arena, which was partly offset are often inconsistencies across different vessels even in sys- by a number of consolidations across existing vendors such as tems from the same vendor. This is something that is addressed for example BMT Smart being acquired by Greensteam, and through solutions like Kongsberg’s Vessel Insight and similar

ChartCo and Marine Press merging to form OneOcean. With solutions from other vendors. We strongly believe that efforts only 20 new vendors mapped during 2019, the last year’s in- like these will be the answer to the industry’s challenge of get- crease in maritime software products is signifcantly lower than ting access to standardized data across systems and feets - and in the two previous years, despite 2019 being a record year making it available for all types of services to build on top of venture funding into maritime startups. In total $1.14 bil- through well-defned and documented APIs.

lion were invested; however, the lion’s share of $1 billion was Last but not least, the number of software vendors experi- dedicated to one single company only: the digital freight for- menting with blockchain technology is also increasing, espe- warder Flexport. The remainder being invested into maritime cially in the area of document handling and document sharing, startups was only $140 million, which is signifcantly less than enabling e.g. a safe transfer of trusted documents, such as ship the previous years’ investments. The largest part of the 2019 or crew certifcates. So far none has taken a signifcant mar- investments went into the 4 startups Traxens (Container IoT), ket share, but we are starting to see alliances form – which is

New vendors that joined our mapping were spread across a number of different areas, such as e.g. ship fnance (Oceanis), What’s coming in 2020? crew management (MarCoPay, Marifed, Arieh Solutions), port Given the current global turmoil in the markets, it is obvious- management (Marine Digital, PortXchange, eYard), market in- ly hard to say how it will affect the market for digital services. telligence & analytics (Oceanbolt, NavD), Fleet Tracking (Or- It is, however, our opinion that the adoption of new digital ser- bitMi) and supply chain (OceanOps, Boxport). It seems that the vices will continue to increase in 2020 as the initial shock of market has fnally reached a saturation in the area of fuel & en- the impact of the Coronavirus softens.

ergy monitoring solutions, where not many new entrants seem The digitalization of the maritime industry has been proceed- to be willing to challenge the well-established existing vendors. ing at an increasing pace, and, while in the beginning it was 24 Maritime Reporter & Engineering News • May 2020