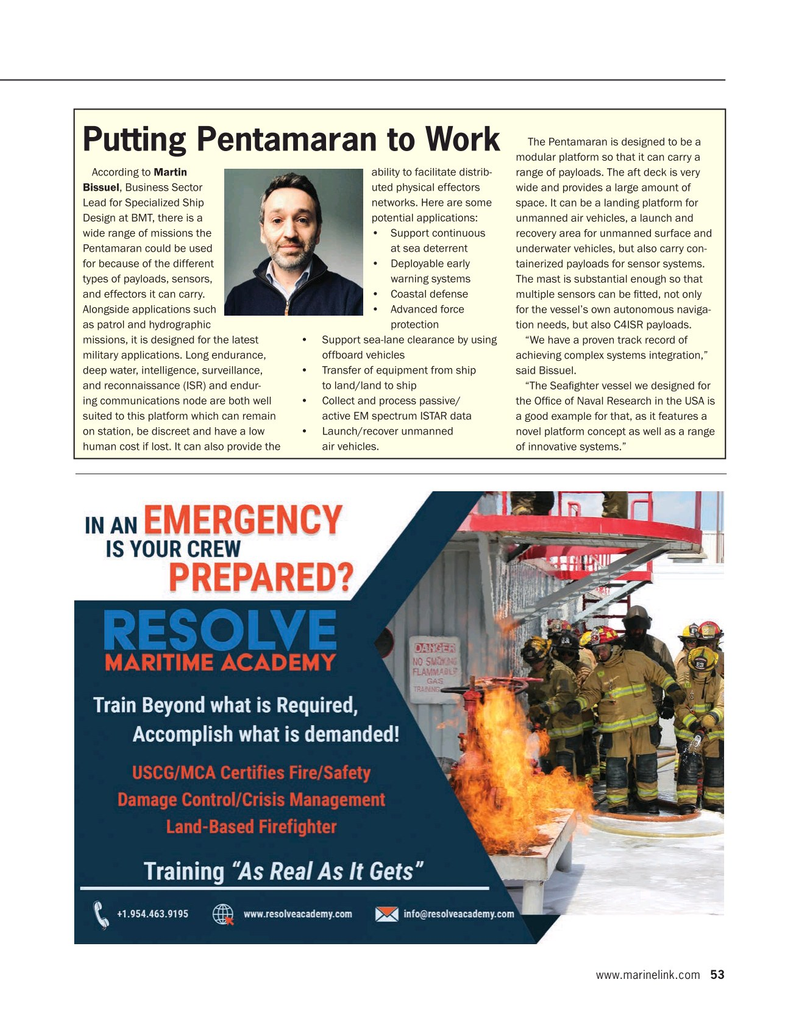 The Pentamaran is designed to be a

According to Martin ability to facilitate distrib- range of payloads. The aft deck is very

Lead for Specialized Ship networks. Here are some space. It can be a landing platform for

Design at BMT, there is a potential applications: unmanned air vehicles, a launch and wide range of missions the • Support continuous recovery area for unmanned surface and

Pentamaran could be used at sea deterrent underwater vehicles, but also carry con- for because of the different • Deployable early tainerized payloads for sensor systems. types of payloads, sensors, warning systems The mast is substantial enough so that and effectors it can carry. • Coastal defense multiple sensors can be ftted, not only

Alongside applications such • Advanced force for the vessel’s own autonomous naviga- as patrol and hydrographic protection tion needs, but also C4ISR payloads. missions, it is designed for the latest • Support sea-lane clearance by using “We have a proven track record of military applications. Long endurance, offboard vehicles achieving complex systems integration,” deep water, intelligence, surveillance, • Transfer of equipment from ship said Bissuel. and reconnaissance (ISR) and endur- to land/land to ship “The Seafghter vessel we designed for ing communications node are both well • Collect and process passive/ the Offce of Naval Research in the USA is suited to this platform which can remain active EM spectrum ISTAR data a good example for that, as it features a on station, be discreet and have a low • Launch/recover unmanned novel platform concept as well as a range human cost if lost. It can also provide the air vehicles. of innovative systems.” www.marinelink.com 53