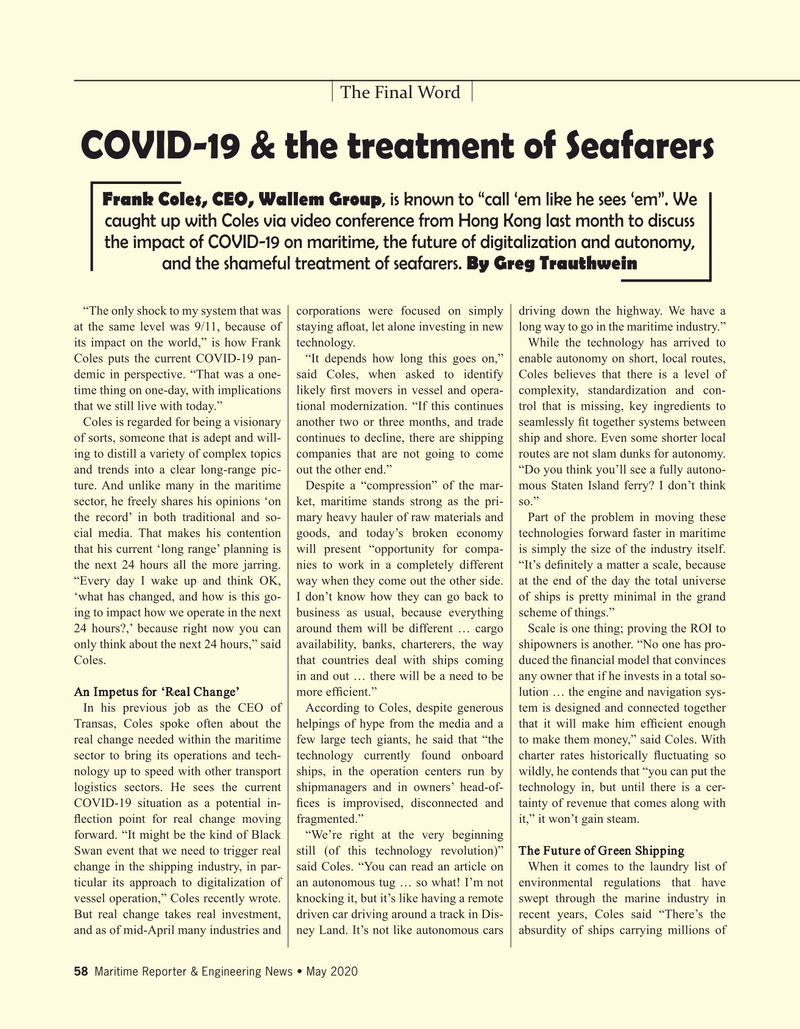 COVID-19 & the treatment of Seafarers

Frank Coles, CEO, Wallem Group, is known to “call ‘em like he sees ‘em”. We caught up with Coles via video conference from Hong Kong last month to discuss the impact of COVID-19 on maritime, the future of digitalization and autonomy, and the shameful treatment of seafarers. By Greg Trauthwein “The only shock to my system that was corporations were focused on simply driving down the highway. We have a at the same level was 9/11, because of staying afoat, let alone investing in new long way to go in the maritime industry.” its impact on the world,” is how Frank technology. While the technology has arrived to

Coles puts the current COVID-19 pan- “It depends how long this goes on,” enable autonomy on short, local routes, demic in perspective. “That was a one- said Coles, when asked to identify Coles believes that there is a level of time thing on one-day, with implications likely frst movers in vessel and opera- complexity, standardization and con- that we still live with today.” tional modernization. “If this continues trol that is missing, key ingredients to

Coles is regarded for being a visionary another two or three months, and trade seamlessly ft together systems between of sorts, someone that is adept and will- continues to decline, there are shipping ship and shore. Even some shorter local ing to distill a variety of complex topics companies that are not going to come routes are not slam dunks for autonomy. and trends into a clear long-range pic- out the other end.” “Do you think you’ll see a fully autono- ture. And unlike many in the maritime Despite a “compression” of the mar- mous Staten Island ferry? I don’t think sector, he freely shares his opinions ‘on ket, maritime stands strong as the pri- so.” the record’ in both traditional and so- mary heavy hauler of raw materials and Part of the problem in moving these cial media. That makes his contention goods, and today’s broken economy technologies forward faster in maritime that his current ‘long range’ planning is will present “opportunity for compa- is simply the size of the industry itself. the next 24 hours all the more jarring. nies to work in a completely different “It’s defnitely a matter a scale, because “Every day I wake up and think OK, way when they come out the other side. at the end of the day the total universe ‘what has changed, and how is this go- I don’t know how they can go back to of ships is pretty minimal in the grand ing to impact how we operate in the next business as usual, because everything scheme of things.” 24 hours?,’ because right now you can around them will be different … cargo Scale is one thing; proving the ROI to only think about the next 24 hours,” said availability, banks, charterers, the way shipowners is another. “No one has pro-

Coles. that countries deal with ships coming duced the fnancial model that convinces in and out … there will be a need to be any owner that if he invests in a total so- an impetus for ‘real change’ more effcient.” lution … the engine and navigation sys-

In his previous job as the CEO of According to Coles, despite generous tem is designed and connected together

Transas, Coles spoke often about the helpings of hype from the media and a that it will make him effcient enough real change needed within the maritime few large tech giants, he said that “the to make them money,” said Coles. With sector to bring its operations and tech- technology currently found onboard charter rates historically fuctuating so nology up to speed with other transport ships, in the operation centers run by wildly, he contends that “you can put the logistics sectors. He sees the current shipmanagers and in owners’ head-of- technology in, but until there is a cer-

COVID-19 situation as a potential in- fces is improvised, disconnected and tainty of revenue that comes along with fection point for real change moving fragmented.” it,” it won’t gain steam.

forward. “It might be the kind of Black “We’re right at the very beginning

Swan event that we need to trigger real still (of this technology revolution)” the future of green Shipping change in the shipping industry, in par- said Coles. “You can read an article on When it comes to the laundry list of ticular its approach to digitalization of an autonomous tug … so what! I’m not environmental regulations that have vessel operation,” Coles recently wrote. knocking it, but it’s like having a remote swept through the marine industry in

But real change takes real investment, driven car driving around a track in Dis- recent years, Coles said “There’s the and as of mid-April many industries and ney Land. It’s not like autonomous cars absurdity of ships carrying millions of 58 Maritime Reporter & Engineering News • May 2020