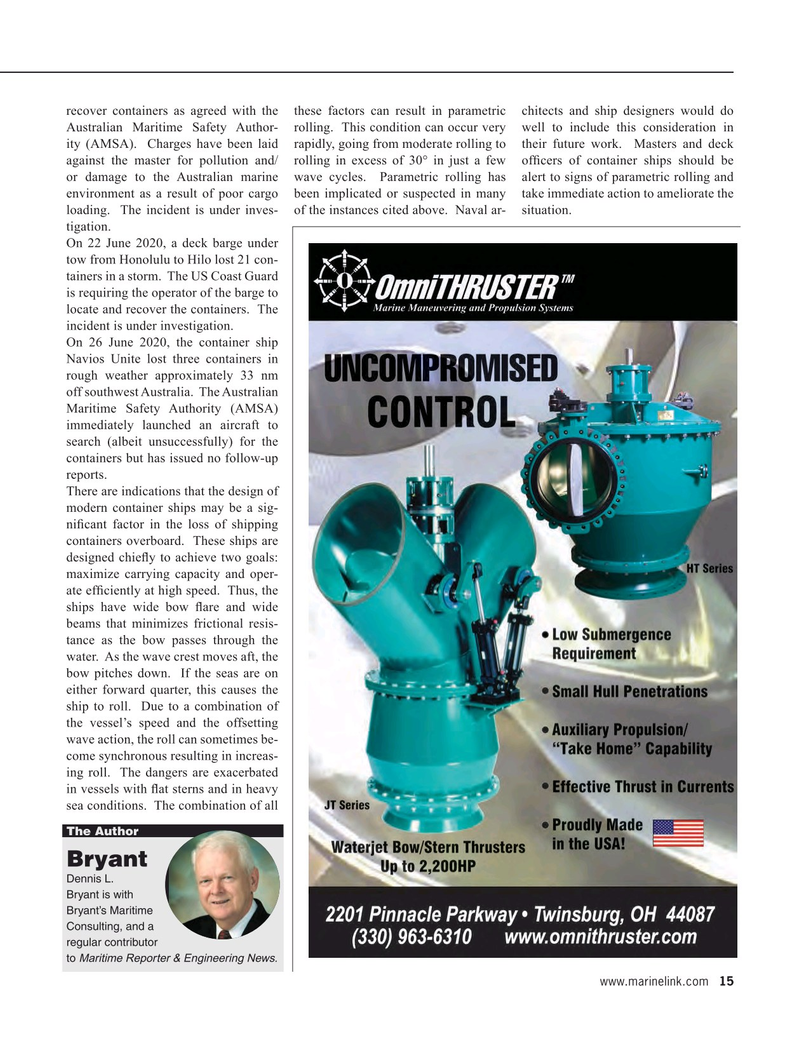 Australian Maritime Safety Author- rolling. This condition can occur very well to include this consideration in ity (AMSA). Charges have been laid rapidly, going from moderate rolling to their future work. Masters and deck against the master for pollution and/ rolling in excess of 30° in just a few of? cers of container ships should be or damage to the Australian marine wave cycles. Parametric rolling has alert to signs of parametric rolling and environment as a result of poor cargo been implicated or suspected in many take immediate action to ameliorate the loading. The incident is under inves- of the instances cited above. Naval ar- situation.

On 22 June 2020, a deck barge under tow from Honolulu to Hilo lost 21 con- tainers in a storm. The US Coast Guard is requiring the operator of the barge to locate and recover the containers. The incident is under investigation.

Maritime Safety Authority (AMSA) immediately launched an aircraft to search (albeit unsuccessfully) for the containers but has issued no follow-up reports.

There are indications that the design of modern container ships may be a sig- ni? cant factor in the loss of shipping containers overboard. These ships are designed chie? y to achieve two goals: maximize carrying capacity and oper- ate ef? ciently at high speed. Thus, the ships have wide bow ? are and wide beams that minimizes frictional resis- tance as the bow passes through the water. As the wave crest moves aft, the bow pitches down. If the seas are on either forward quarter, this causes the ship to roll. Due to a combination of the vessel’s speed and the offsetting wave action, the roll can sometimes be- come synchronous resulting in increas- ing roll. The dangers are exacerbated in vessels with ? at sterns and in heavy sea conditions. The combination of all