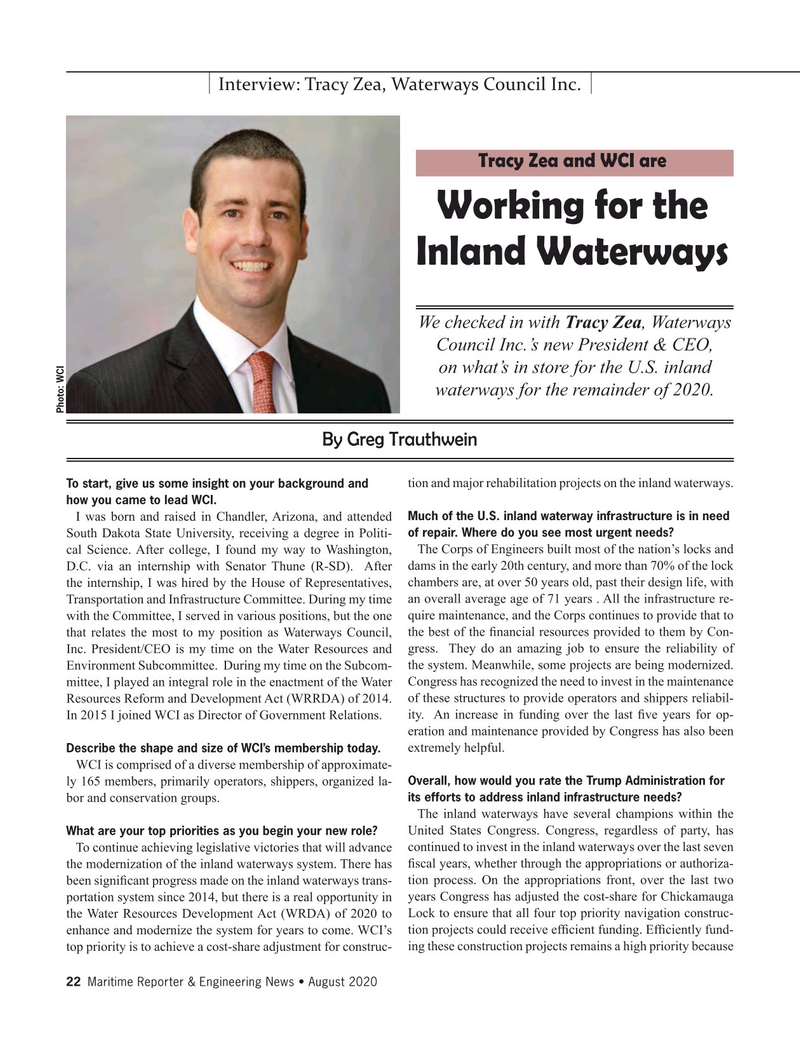 Tracy Zea and WCI are

We checked in with Tracy Zea, Waterways

Council Inc.’s new President & CEO, on what’s in store for the U.S. inland waterways for the remainder of 2020.

By Greg Trauthwein tion and major rehabilitation projects on the inland waterways.

To start, give us some insight on your background and how you came to lead WCI.

Much of the U.S. inland waterway infrastructure is in need

I was born and raised in Chandler, Arizona, and attended of repair. Where do you see most urgent needs?

South Dakota State University, receiving a degree in Politi- cal Science. After college, I found my way to Washington, The Corps of Engineers built most of the nation’s locks and

D.C. via an internship with Senator Thune (R-SD). After dams in the early 20th century, and more than 70% of the lock the internship, I was hired by the House of Representatives, chambers are, at over 50 years old, past their design life, with

Transportation and Infrastructure Committee. During my time an overall average age of 71 years . All the infrastructure re- with the Committee, I served in various positions, but the one quire maintenance, and the Corps continues to provide that to that relates the most to my position as Waterways Council, the best of the ? nancial resources provided to them by Con-

Inc. President/CEO is my time on the Water Resources and gress. They do an amazing job to ensure the reliability of

Environment Subcommittee. During my time on the Subcom- the system. Meanwhile, some projects are being modernized. mittee, I played an integral role in the enactment of the Water Congress has recognized the need to invest in the maintenance

Resources Reform and Development Act (WRRDA) of 2014. of these structures to provide operators and shippers reliabil-

In 2015 I joined WCI as Director of Government Relations. ity. An increase in funding over the last ? ve years for op- eration and maintenance provided by Congress has also been extremely helpful.

Describe the shape and size of WCI’s membership today.

WCI is comprised of a diverse membership of approximate-

The inland waterways have several champions within the

United States Congress. Congress, regardless of party, has

What are your top priorities as you begin your new role?

To continue achieving legislative victories that will advance continued to invest in the inland waterways over the last seven the modernization of the inland waterways system. There has ? scal years, whether through the appropriations or authoriza- been signi? cant progress made on the inland waterways trans- tion process. On the appropriations front, over the last two portation system since 2014, but there is a real opportunity in years Congress has adjusted the cost-share for Chickamauga the Water Resources Development Act (WRDA) of 2020 to Lock to ensure that all four top priority navigation construc- enhance and modernize the system for years to come. WCI’s tion projects could receive ef? cient funding. Ef? ciently fund- top priority is to achieve a cost-share adjustment for construc- ing these construction projects remains a high priority because 22 Maritime Reporter & Engineering News • August 2020