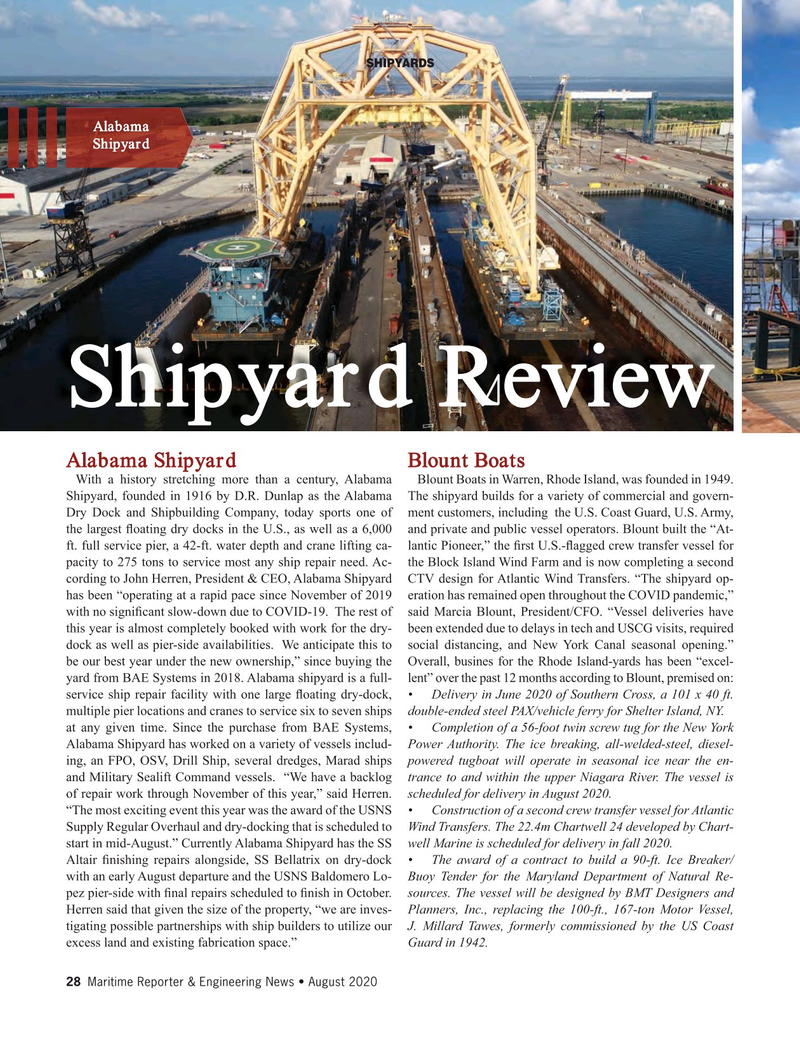 With a history stretching more than a century, Alabama Blount Boats in Warren, Rhode Island, was founded in 1949.

Shipyard, founded in 1916 by D.R. Dunlap as the Alabama The shipyard builds for a variety of commercial and govern-

Dry Dock and Shipbuilding Company, today sports one of ment customers, including the U.S. Coast Guard, U.S. Army, the largest ? oating dry docks in the U.S., as well as a 6,000 and private and public vessel operators. Blount built the “At- ft. full service pier, a 42-ft. water depth and crane lifting ca- lantic Pioneer,” the ? rst U.S.-? agged crew transfer vessel for pacity to 275 tons to service most any ship repair need. Ac- the Block Island Wind Farm and is now completing a second cording to John Herren, President & CEO, Alabama Shipyard CTV design for Atlantic Wind Transfers. “The shipyard op- has been “operating at a rapid pace since November of 2019 eration has remained open throughout the COVID pandemic,” with no signi? cant slow-down due to COVID-19. The rest of said Marcia Blount, President/CFO. “Vessel deliveries have this year is almost completely booked with work for the dry- been extended due to delays in tech and USCG visits, required dock as well as pier-side availabilities. We anticipate this to social distancing, and New York Canal seasonal opening.” be our best year under the new ownership,” since buying the Overall, busines for the Rhode Island-yards has been “excel- yard from BAE Systems in 2018. Alabama shipyard is a full- lent” over the past 12 months according to Blount, premised on: service ship repair facility with one large ? oating dry-dock, • Delivery in June 2020 of Southern Cross, a 101 x 40 ft. multiple pier locations and cranes to service six to seven ships double-ended steel PAX/vehicle ferry for Shelter Island, NY. at any given time. Since the purchase from BAE Systems, • Completion of a 56-foot twin screw tug for the New York

Alabama Shipyard has worked on a variety of vessels includ- Power Authority. The ice breaking, all-welded-steel, diesel- ing, an FPO, OSV, Drill Ship, several dredges, Marad ships powered tugboat will operate in seasonal ice near the en- and Military Sealift Command vessels. “We have a backlog trance to and within the upper Niagara River. The vessel is of repair work through November of this year,” said Herren. scheduled for delivery in August 2020. “The most exciting event this year was the award of the USNS • Construction of a second crew transfer vessel for Atlantic

Supply Regular Overhaul and dry-docking that is scheduled to Wind Transfers. The 22.4m Chartwell 24 developed by Chart- start in mid-August.” Currently Alabama Shipyard has the SS well Marine is scheduled for delivery in fall 2020.

Altair ? nishing repairs alongside, SS Bellatrix on dry-dock • The award of a contract to build a 90-ft. Ice Breaker/ with an early August departure and the USNS Baldomero Lo- Buoy Tender for the Maryland Department of Natural Re- pez pier-side with ? nal repairs scheduled to ? nish in October. sources. The vessel will be designed by BMT Designers and

Herren said that given the size of the property, “we are inves- Planners, Inc., replacing the 100-ft., 167-ton Motor Vessel, tigating possible partnerships with ship builders to utilize our J. Millard Tawes, formerly commissioned by the US Coast excess land and existing fabrication space.” Guard in 1942. 28 Maritime Reporter & Engineering News • August 2020