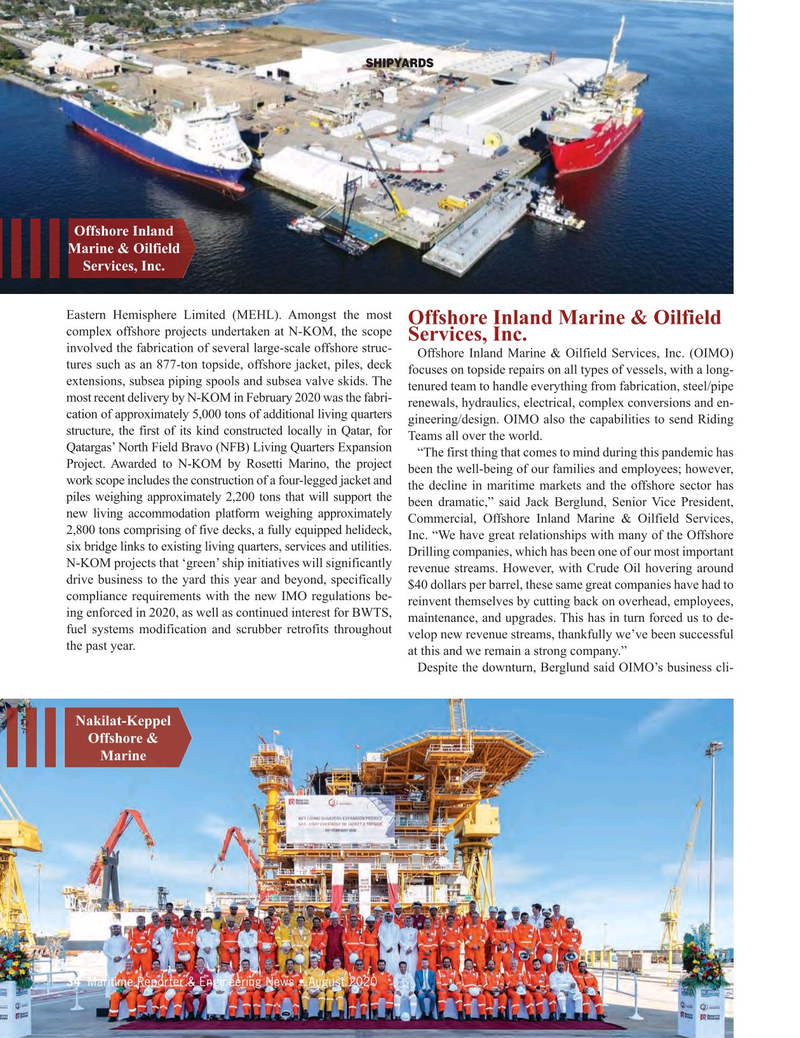 Eastern Hemisphere Limited (MEHL). Amongst the most

Offshore Inland Marine & Oilfield Services, Inc. (OIMO) tures such as an 877-ton topside, offshore jacket, piles, deck focuses on topside repairs on all types of vessels, with a long- extensions, subsea piping spools and subsea valve skids. The tenured team to handle everything from fabrication, steel/pipe most recent delivery by N-KOM in February 2020 was the fabri- renewals, hydraulics, electrical, complex conversions and en- cation of approximately 5,000 tons of additional living quarters gineering/design. OIMO also the capabilities to send Riding structure, the first of its kind constructed locally in Qatar, for Teams all over the world.

Project. Awarded to N-KOM by Rosetti Marino, the project been the well-being of our families and employees; however, work scope includes the construction of a four-legged jacket and the decline in maritime markets and the offshore sector has piles weighing approximately 2,200 tons that will support the been dramatic,” said Jack Berglund, Senior Vice President, new living accommodation platform weighing approximately Commercial, Offshore Inland Marine & Oilfield Services, 2,800 tons comprising of five decks, a fully equipped helideck,

Inc. “We have great relationships with many of the Offshore six bridge links to existing living quarters, services and utilities.

Drilling companies, which has been one of our most important

N-KOM projects that ‘green’ ship initiatives will significantly revenue streams. However, with Crude Oil hovering around drive business to the yard this year and beyond, specifically $40 dollars per barrel, these same great companies have had to compliance requirements with the new IMO regulations be- reinvent themselves by cutting back on overhead, employees, ing enforced in 2020, as well as continued interest for BWTS, maintenance, and upgrades. This has in turn forced us to de- fuel systems modification and scrubber retrofits throughout velop new revenue streams, thankfully we’ve been successful the past year. at this and we remain a strong company.”