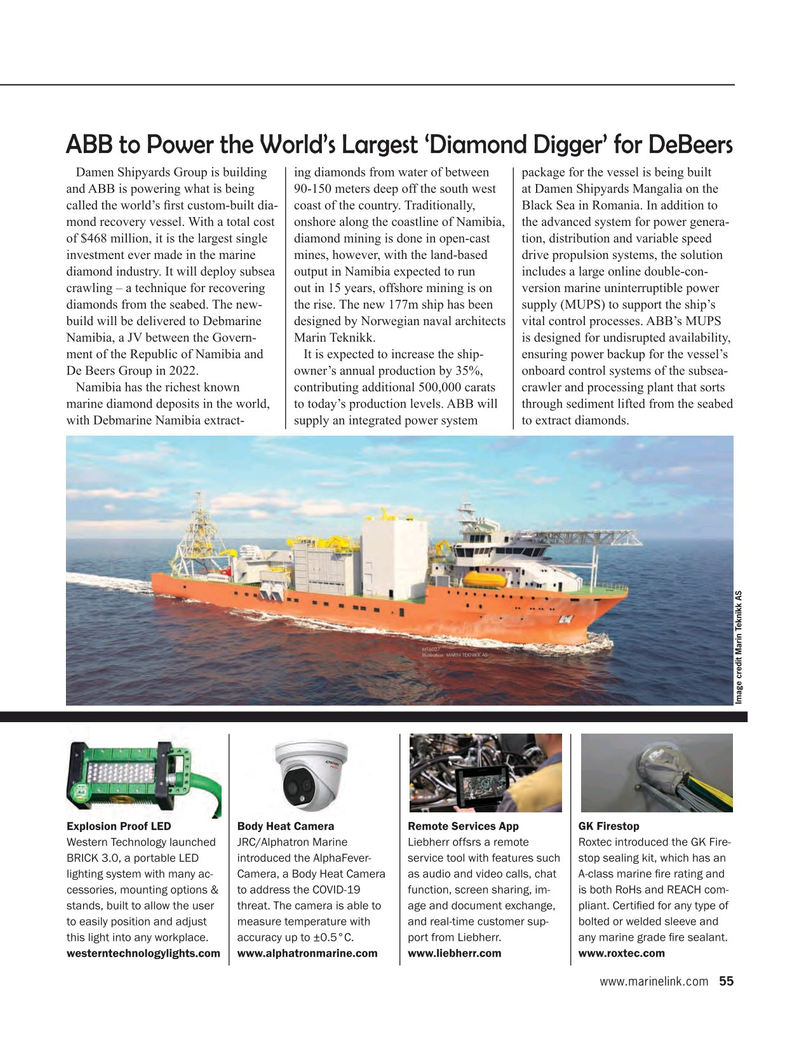 ABB to Power the World’s Largest ‘Diamond Digger’ for DeBeers

Damen Shipyards Group is building ing diamonds from water of between package for the vessel is being built and ABB is powering what is being 90-150 meters deep off the south west at Damen Shipyards Mangalia on the called the world’s ? rst custom-built dia- coast of the country. Traditionally, Black Sea in Romania. In addition to mond recovery vessel. With a total cost onshore along the coastline of Namibia, the advanced system for power genera- of $468 million, it is the largest single diamond mining is done in open-cast tion, distribution and variable speed investment ever made in the marine mines, however, with the land-based drive propulsion systems, the solution diamond industry. It will deploy subsea output in Namibia expected to run includes a large online double-con- crawling – a technique for recovering out in 15 years, offshore mining is on version marine uninterruptible power diamonds from the seabed. The new- the rise. The new 177m ship has been supply (MUPS) to support the ship’s build will be delivered to Debmarine designed by Norwegian naval architects vital control processes. ABB’s MUPS

Namibia, a JV between the Govern- Marin Teknikk. is designed for undisrupted availability, ment of the Republic of Namibia and It is expected to increase the ship- ensuring power backup for the vessel’s

De Beers Group in 2022. owner’s annual production by 35%, onboard control systems of the subsea-

Namibia has the richest known contributing additional 500,000 carats crawler and processing plant that sorts marine diamond deposits in the world, to today’s production levels. ABB will through sediment lifted from the seabed with Debmarine Namibia extract- supply an integrated power system to extract diamonds.

BRICK 3.0, a portable LED introduced the AlphaFever- service tool with features such stop sealing kit, which has an lighting system with many ac- Camera, a Body Heat Camera as audio and video calls, chat A-class marine ? re rating and cessories, mounting options & to address the COVID-19 function, screen sharing, im- is both RoHs and REACH com- stands, built to allow the user threat. The camera is able to age and document exchange, pliant. Certi? ed for any type of to easily position and adjust measure temperature with and real-time customer sup- bolted or welded sleeve and this light into any workplace. accuracy up to ±0.5°C. port from Liebherr. any marine grade ? re sealant.