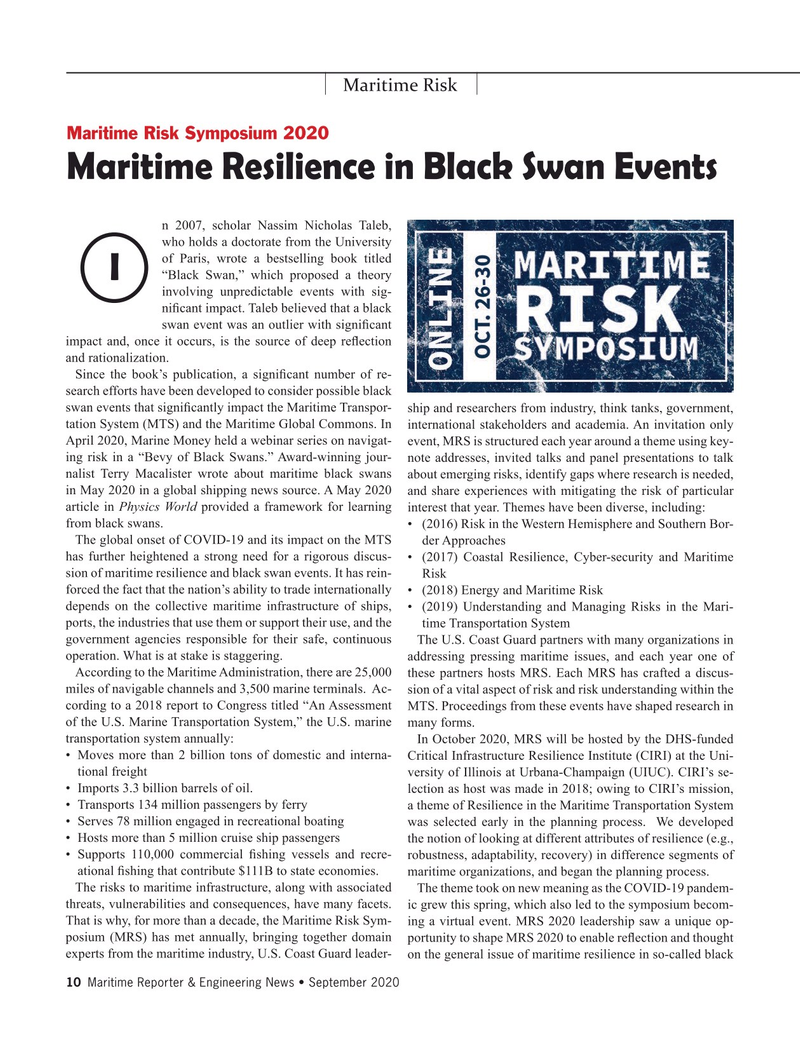 I involving unpredictable events with sig- ni? cant impact. Taleb believed that a black swan event was an outlier with signi? cant impact and, once it occurs, is the source of deep re? ection and rationalization.

Since the book’s publication, a signi? cant number of re- search efforts have been developed to consider possible black swan events that signi? cantly impact the Maritime Transpor- ship and researchers from industry, think tanks, government, tation System (MTS) and the Maritime Global Commons. In international stakeholders and academia. An invitation only

April 2020, Marine Money held a webinar series on navigat- event, MRS is structured each year around a theme using key- ing risk in a “Bevy of Black Swans.” Award-winning jour- note addresses, invited talks and panel presentations to talk nalist Terry Macalister wrote about maritime black swans about emerging risks, identify gaps where research is needed, in May 2020 in a global shipping news source. A May 2020 and share experiences with mitigating the risk of particular article in Physics World provided a framework for learning interest that year. Themes have been diverse, including: from black swans. • (2016) Risk in the Western Hemisphere and Southern Bor-

The global onset of COVID-19 and its impact on the MTS der Approaches has further heightened a strong need for a rigorous discus- • (2017) Coastal Resilience, Cyber-security and Maritime sion of maritime resilience and black swan events. It has rein- Risk forced the fact that the nation’s ability to trade internationally • (2018) Energy and Maritime Risk depends on the collective maritime infrastructure of ships, • (2019) Understanding and Managing Risks in the Mari- ports, the industries that use them or support their use, and the time Transportation System government agencies responsible for their safe, continuous The U.S. Coast Guard partners with many organizations in operation. What is at stake is staggering. addressing pressing maritime issues, and each year one of

According to the Maritime Administration, there are 25,000 these partners hosts MRS. Each MRS has crafted a discus- miles of navigable channels and 3,500 marine terminals. Ac- sion of a vital aspect of risk and risk understanding within the cording to a 2018 report to Congress titled “An Assessment MTS. Proceedings from these events have shaped research in of the U.S. Marine Transportation System,” the U.S. marine many forms. transportation system annually: In October 2020, MRS will be hosted by the DHS-funded • Moves more than 2 billion tons of domestic and interna- Critical Infrastructure Resilience Institute (CIRI) at the Uni- tional freight versity of Illinois at Urbana-Champaign (UIUC). CIRI’s se- • Imports 3.3 billion barrels of oil. lection as host was made in 2018; owing to CIRI’s mission, • Transports 134 million passengers by ferry a theme of Resilience in the Maritime Transportation System • Serves 78 million engaged in recreational boating was selected early in the planning process. We developed • Hosts more than 5 million cruise ship passengers the notion of looking at different attributes of resilience (e.g., • Supports 110,000 commercial ? shing vessels and recre- robustness, adaptability, recovery) in difference segments of ational ? shing that contribute $111B to state economies. maritime organizations, and began the planning process.

The risks to maritime infrastructure, along with associated The theme took on new meaning as the COVID-19 pandem- threats, vulnerabilities and consequences, have many facets. ic grew this spring, which also led to the symposium becom-

That is why, for more than a decade, the Maritime Risk Sym- ing a virtual event. MRS 2020 leadership saw a unique op- posium (MRS) has met annually, bringing together domain portunity to shape MRS 2020 to enable re? ection and thought experts from the maritime industry, U.S. Coast Guard leader- on the general issue of maritime resilience in so-called black 10 Maritime Reporter & Engineering News • September 2020