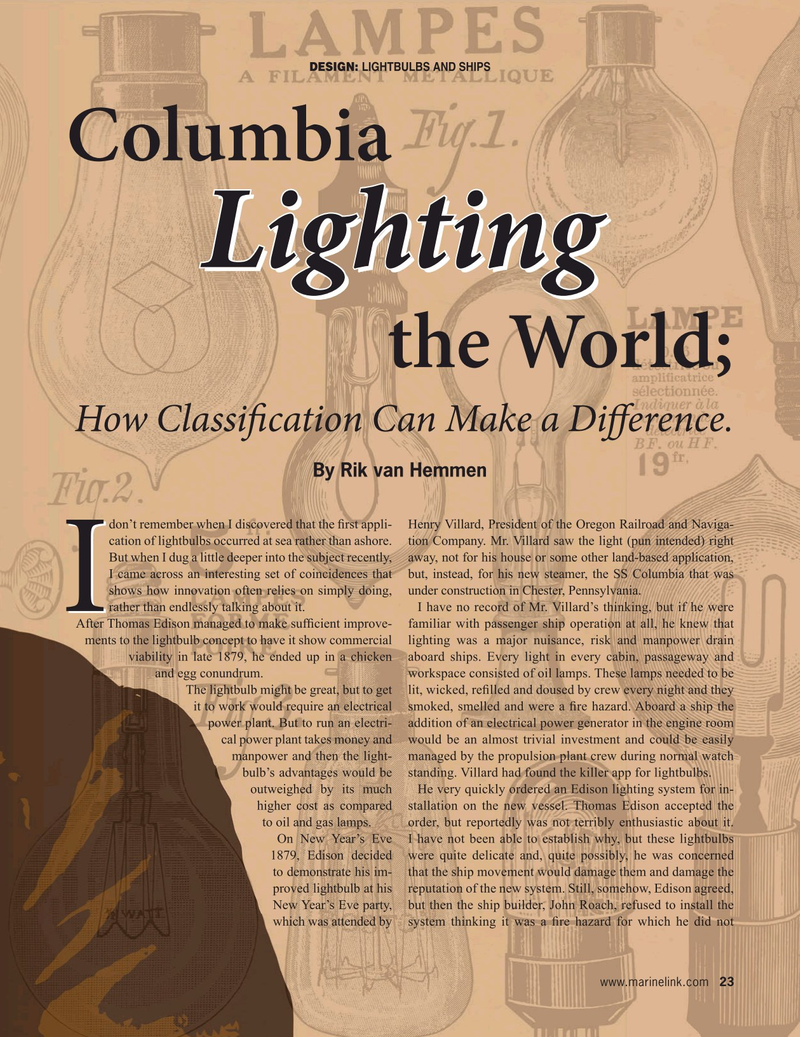 LightingLighting the World; How Classif cation Can Make a Dif erence.

By Rik van Hemmen don’t remember when I discovered that the ? rst appli- Henry Villard, President of the Oregon Railroad and Naviga- cation of lightbulbs occurred at sea rather than ashore. tion Company. Mr. Villard saw the light (pun intended) right

But when I dug a little deeper into the subject recently, away, not for his house or some other land-based application,

I came across an interesting set of coincidences that but, instead, for his new steamer, the SS Columbia that was shows how innovation often relies on simply doing, under construction in Chester, Pennsylvania.

I I rather than endlessly talking about it. I have no record of Mr. Villard’s thinking, but if he were

After Thomas Edison managed to make suf? cient improve- familiar with passenger ship operation at all, he knew that ments to the lightbulb concept to have it show commercial lighting was a major nuisance, risk and manpower drain viability in late 1879, he ended up in a chicken aboard ships. Every light in every cabin, passageway and and egg conundrum. workspace consisted of oil lamps. These lamps needed to be

The lightbulb might be great, but to get lit, wicked, re? lled and doused by crew every night and they it to work would require an electrical smoked, smelled and were a ? re hazard. Aboard a ship the power plant. But to run an electri- addition of an electrical power generator in the engine room cal power plant takes money and would be an almost trivial investment and could be easily manpower and then the light- managed by the propulsion plant crew during normal watch bulb’s advantages would be standing. Villard had found the killer app for lightbulbs. outweighed by its much He very quickly ordered an Edison lighting system for in- higher cost as compared stallation on the new vessel. Thomas Edison accepted the to oil and gas lamps. order, but reportedly was not terribly enthusiastic about it.

On New Year’s Eve I have not been able to establish why, but these lightbulbs 1879, Edison decided were quite delicate and, quite possibly, he was concerned to demonstrate his im- that the ship movement would damage them and damage the proved lightbulb at his reputation of the new system. Still, somehow, Edison agreed,

New Year’s Eve party, but then the ship builder, John Roach, refused to install the which was attended by system thinking it was a ? re hazard for which he did not www.marinelink.com 23