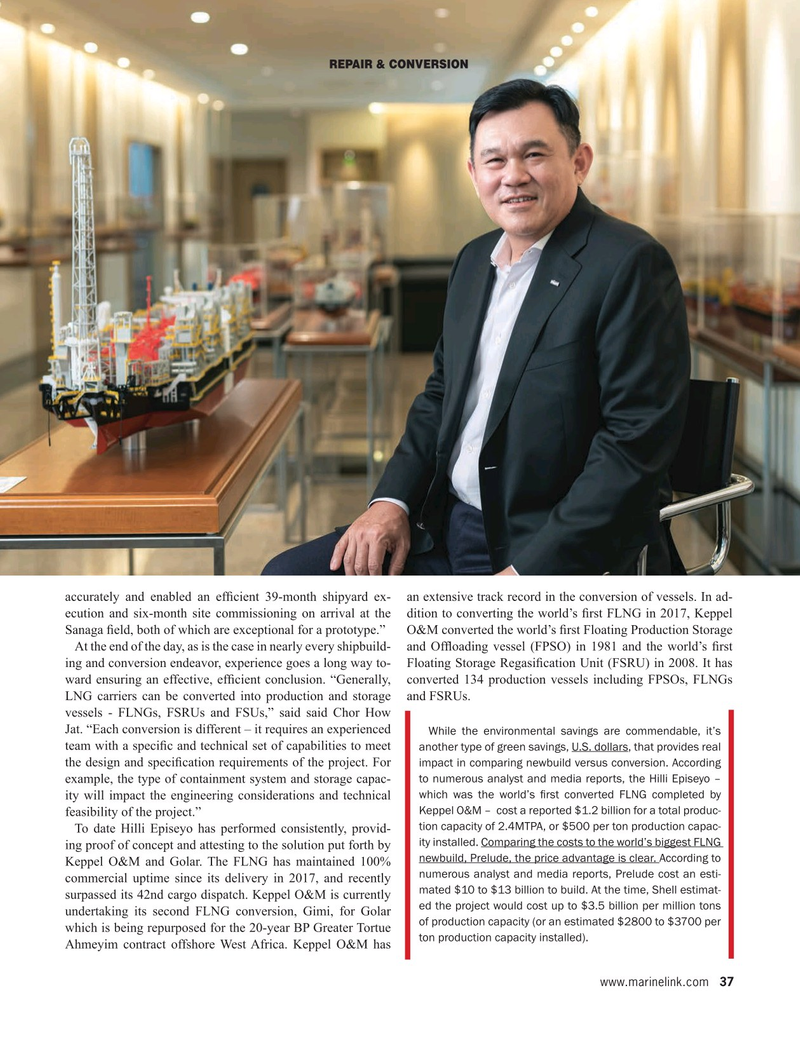 REPAIR & CONVERSION accurately and enabled an ef? cient 39-month shipyard ex- an extensive track record in the conversion of vessels. In ad- ecution and six-month site commissioning on arrival at the dition to converting the world’s ? rst FLNG in 2017, Keppel

Sanaga ? eld, both of which are exceptional for a prototype.” O&M converted the world’s ? rst Floating Production Storage

At the end of the day, as is the case in nearly every shipbuild- and Of? oading vessel (FPSO) in 1981 and the world’s ? rst ing and conversion endeavor, experience goes a long way to- Floating Storage Regasi? cation Unit (FSRU) in 2008. It has ward ensuring an effective, ef? cient conclusion. “Generally, converted 134 production vessels including FPSOs, FLNGs

LNG carriers can be converted into production and storage and FSRUs.

Jat. “Each conversion is different – it requires an experienced

While the environmental savings are commendable, it’s team with a speci? c and technical set of capabilities to meet another type of green savings, U.S. dollars, that provides real the design and speci? cation requirements of the project. For impact in comparing newbuild versus conversion. According to numerous analyst and media reports, the Hilli Episeyo – example, the type of containment system and storage capac- which was the world’s ? rst converted FLNG completed by ity will impact the engineering considerations and technical

Keppel O&M – cost a reported $1.2 billion for a total produc- feasibility of the project.” tion capacity of 2.4MTPA, or $500 per ton production capac-

To date Hilli Episeyo has performed consistently, provid- ity installed. Comparing the costs to the world’s biggest FLNG ing proof of concept and attesting to the solution put forth by newbuild, Prelude, the price advantage is clear. According to

Keppel O&M and Golar. The FLNG has maintained 100% numerous analyst and media reports, Prelude cost an esti- commercial uptime since its delivery in 2017, and recently mated $10 to $13 billion to build. At the time, Shell estimat- surpassed its 42nd cargo dispatch. Keppel O&M is currently ed the project would cost up to $3.5 billion per million tons undertaking its second FLNG conversion, Gimi, for Golar of production capacity (or an estimated $2800 to $3700 per which is being repurposed for the 20-year BP Greater Tortue ton production capacity installed).