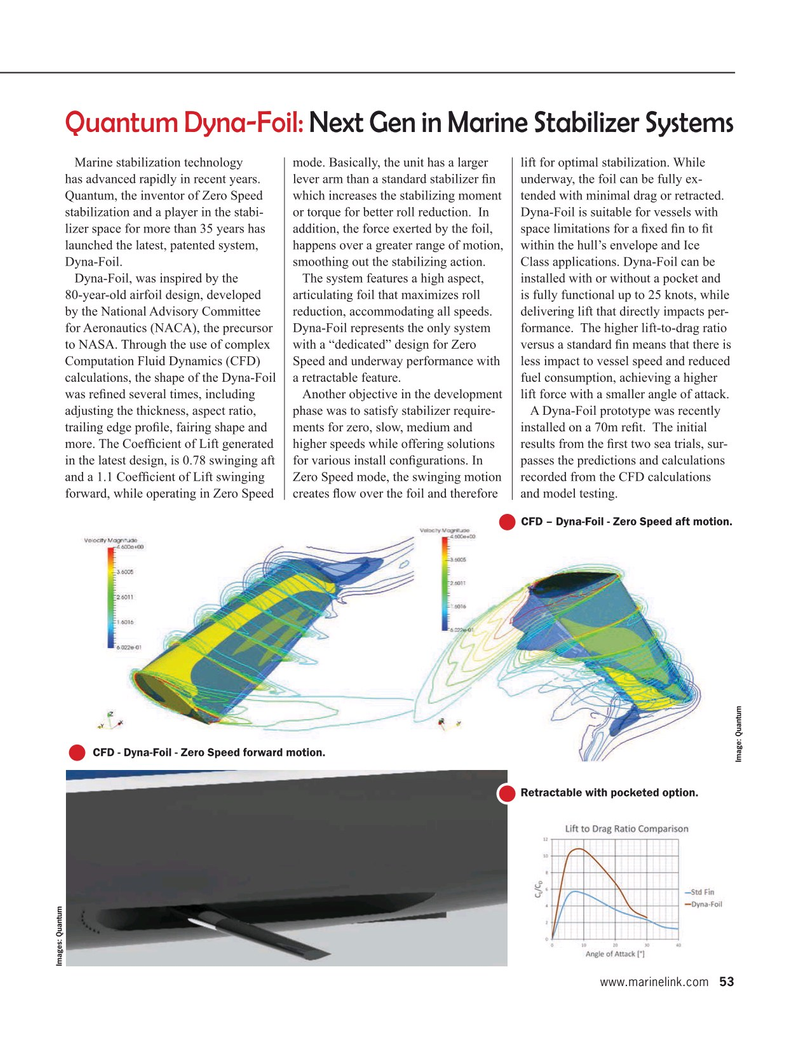 Marine stabilization technology mode. Basically, the unit has a larger lift for optimal stabilization. While has advanced rapidly in recent years. lever arm than a standard stabilizer ? n underway, the foil can be fully ex-

Quantum, the inventor of Zero Speed which increases the stabilizing moment tended with minimal drag or retracted. stabilization and a player in the stabi- or torque for better roll reduction. In Dyna-Foil is suitable for vessels with lizer space for more than 35 years has addition, the force exerted by the foil, space limitations for a ? xed ? n to ? t launched the latest, patented system, happens over a greater range of motion, within the hull’s envelope and Ice

Dyna-Foil. smoothing out the stabilizing action. Class applications. Dyna-Foil can be

Dyna-Foil, was inspired by the The system features a high aspect, installed with or without a pocket and 80-year-old airfoil design, developed articulating foil that maximizes roll is fully functional up to 25 knots, while by the National Advisory Committee reduction, accommodating all speeds. delivering lift that directly impacts per- for Aeronautics (NACA), the precursor Dyna-Foil represents the only system formance. The higher lift-to-drag ratio to NASA. Through the use of complex with a “dedicated” design for Zero versus a standard ? n means that there is

Computation Fluid Dynamics (CFD) Speed and underway performance with less impact to vessel speed and reduced calculations, the shape of the Dyna-Foil a retractable feature. fuel consumption, achieving a higher was re? ned several times, including Another objective in the development lift force with a smaller angle of attack. adjusting the thickness, aspect ratio, phase was to satisfy stabilizer require- A Dyna-Foil prototype was recently trailing edge pro? le, fairing shape and ments for zero, slow, medium and installed on a 70m re? t. The initial more. The Coef? cient of Lift generated higher speeds while offering solutions results from the ? rst two sea trials, sur- in the latest design, is 0.78 swinging aft for various install con? gurations. In passes the predictions and calculations and a 1.1 Coef? cient of Lift swinging Zero Speed mode, the swinging motion recorded from the CFD calculations forward, while operating in Zero Speed creates ? ow over the foil and therefore and model testing.