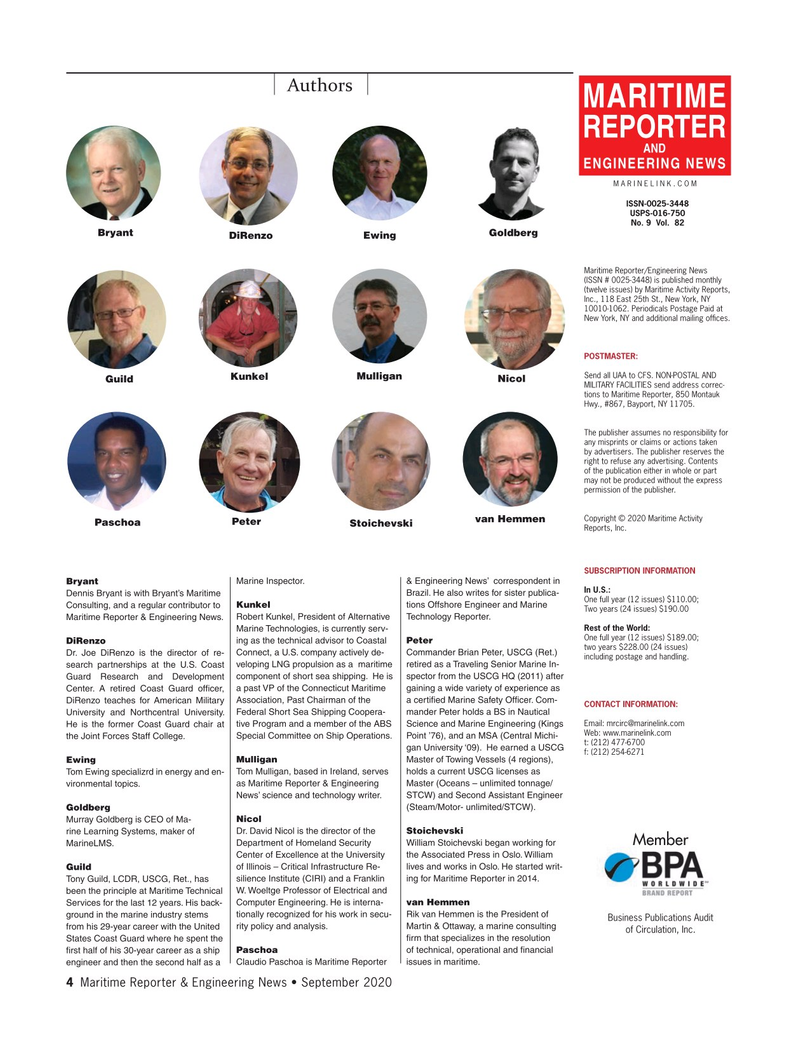 Send all UAA to CFS. NON-POSTAL AND

The publisher assumes no responsibility for any misprints or claims or actions taken by advertisers. The publisher reserves the right to refuse any advertising. Contents of the publication either in whole or part may not be produced without the express permission of the publisher.

Dennis Bryant is with Bryant’s Maritime Brazil. He also writes for sister publica-

Consulting, and a regular contributor to Kunkel tions Offshore Engineer and Marine

Rest of the World:

Dr. Joe DiRenzo is the director of re- Connect, a U.S. company actively de- Commander Brian Peter, USCG (Ret.) including postage and handling. search partnerships at the U.S. Coast veloping LNG propulsion as a maritime retired as a Traveling Senior Marine In-

Guard Research and Development component of short sea shipping. He is spector from the USCG HQ (2011) after

Center. A retired Coast Guard of? cer, a past VP of the Connecticut Maritime gaining a wide variety of experience as

DiRenzo teaches for American Military Association, Past Chairman of the a certi? ed Marine Safety Of? cer. Com-

Murray Goldberg is CEO of Ma- Nicol rine Learning Systems, maker of Dr. David Nicol is the director of the Stoichevski

Center of Excellence at the University the Associated Press in Oslo. William

Guild of Illinois – Critical Infrastructure Re- lives and works in Oslo. He started writ-

been the principle at Maritime Technical W. Woeltge Professor of Electrical and

Services for the last 12 years. His back- Computer Engineering. He is interna- van Hemmen ground in the marine industry stems tionally recognized for his work in secu- Rik van Hemmen is the President of

Business Publications Audit from his 29-year career with the United rity policy and analysis. Martin & Ottaway, a marine consulting of Circulation, Inc.

States Coast Guard where he spent the ? rm that specializes in the resolution ? rst half of his 30-year career as a ship Paschoa of technical, operational and ? nancial engineer and then the second half as a Claudio Paschoa is Maritime Reporter issues in maritime. 4 Maritime Reporter & Engineering News • September 2020