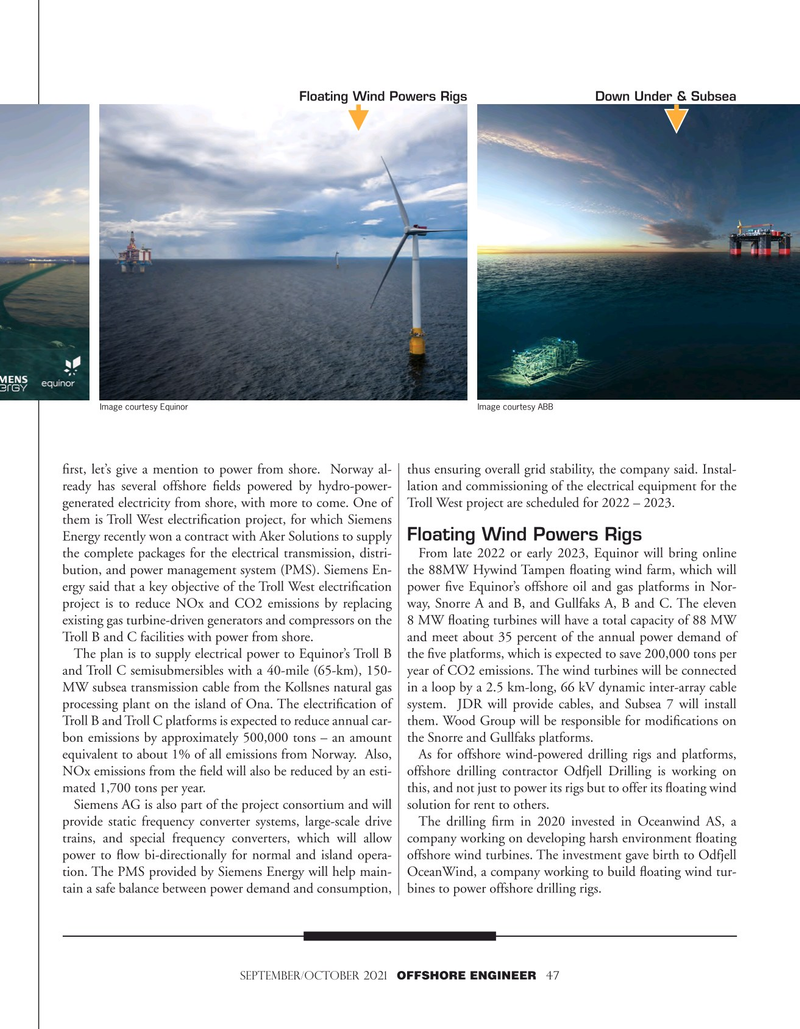 Image courtesy Equinor Image courtesy ABB frst, let’s give a mention to power from shore. Norway al- thus ensuring overall grid stability, the company said. Instal- ready has several offshore felds powered by hydro-power- lation and commissioning of the electrical equipment for the generated electricity from shore, with more to come. One of Troll West project are scheduled for 2022 – 2023.

them is Troll West electrifcation project, for which Siemens

Energy recently won a contract with Aker Solutions to supply

Floating Wind Powers Rigs the complete packages for the electrical transmission, distri- From late 2022 or early 2023, Equinor will bring online bution, and power management system (PMS). Siemens En- the 88MW Hywind Tampen foating wind farm, which will ergy said that a key objective of the Troll West electrifcation power fve Equinor’s offshore oil and gas platforms in Nor- project is to reduce NOx and CO2 emissions by replacing way, Snorre A and B, and Gullfaks A, B and C. The eleven existing gas turbine-driven generators and compressors on the 8 MW foating turbines will have a total capacity of 88 MW

Troll B and C facilities with power from shore. and meet about 35 percent of the annual power demand of

The plan is to supply electrical power to Equinor’s Troll B the fve platforms, which is expected to save 200,000 tons per and Troll C semisubmersibles with a 40-mile (65-km), 150- year of CO2 emissions. The wind turbines will be connected

MW subsea transmission cable from the Kollsnes natural gas in a loop by a 2.5 km-long, 66 kV dynamic inter-array cable processing plant on the island of Ona. The electrifcation of system. JDR will provide cables, and Subsea 7 will install

Troll B and Troll C platforms is expected to reduce annual car- them. Wood Group will be responsible for modifcations on bon emissions by approximately 500,000 tons – an amount the Snorre and Gullfaks platforms.

equivalent to about 1% of all emissions from Norway. Also, As for offshore wind-powered drilling rigs and platforms,

NOx emissions from the feld will also be reduced by an esti- offshore drilling contractor Odfjell Drilling is working on mated 1,700 tons per year. this, and not just to power its rigs but to offer its foating wind

Siemens AG is also part of the project consortium and will solution for rent to others.