Collaboration is a wonderful thing.  And in Washington, DC, it seems to be a concept that has become more alien than ever before, with partisan politics that have gripped the nation’s capital. But teamwork is alive and well in the inland waterways industry when it comes to supporting the concept of increasing the amount of investment raised for lock and dam infrastructure on the inland system.
Since 1986, commercial inland towing operators have been paying a user fee of 20-cents-per-gallon of fuel used while operating on the inland system that is deposited into the Inland Waterways Trust Fund (IWTF). Those monies are then matched by General Treasury dollars and spent for the purpose of new construction and major rehabilitation work on the inland waterways. The problem is that our locks are aging, with 57% operating beyond their 50-year economic design life, and by the end of this decade, 78% will be greater than 50 years old. The inland marine transportation system, while still reliable, is in need of greater investment to avoid a tipping point of catastrophic consequences for shippers, consumers, and our nation’s exports.
WCI, along with its stakeholder members and supporters, has long called for increasing that 20-cents-per-gallon fuel charge to 26- to 29-cents-per-gallon. While the receipt amount for a given year depends on traffic volumes and trip distances which vary year to year, on average each penny of user fee yields about $4.2 million in IWTF receipts. So a 6-cent tax increase would add around $25.2 million annually to the Trust Fund (or $50.4 million total with the government match) and a 9-cent increase would add $37.8 million (or $75.6 million total with the government match) annually for the benefit of priority navigation projects on the system. With the current, status quo timeline for completing new construction and major rehabilitation of navigation projects across the system stretching out to the year 2090, additional annual investment at these levels would be an extremely welcome boost.
This user fee increase is supported by those who pay it -- the 300 commercial towboat operators -- while the entire nation benefits, including hydropower, municipal water supply, recreational boating and fishing, flood control, national security, and waterfront property development that result from the lock and dam system.
The most recent expression of support for this user fee increase came from 82 stakeholder organizations from agriculture, labor, conservation, business, manufacturing and others in a letter sent April 28 to members of the Senate Finance Committee and its Chairman Ron Wyden of Oregon and Ranking Member Orrin Hatch of Utah. “We hope that members of the Senate Finance Committee will support inclusion of an increase to the user fee in comprehensive tax reform or any appropriate revenue measure ahead,” the letter said.
The letter also stated some key facts:  The inland waterways provide capacity and the most cost-competitive transportation option for our bulk commodities used in America and exported to marketplaces worldwide. Specifically, these include:

It is true that most of America’s locks and dams were built in the 1920s and 1930s, yet are used to transport 21st century cargoes that fuel our modern economy. This critical component of the transportation supply chain needs reinvestment and recapitalization, and any appropriate revenue bill that includes an industry sought increase in the user fee it pays is fiscally responsible.
A similar letter was sent last September to the House Ways & Means Committee and became the basis for a recommendation to raise the per-gallon user fee by 6 cents that appeared in Committee Chairman Dave Camp’s discussion draft of a bill on tax reform. And as this letter is testament, collaboration is critical for telling Congress what the people want; in this case, increased investment in a key component of the nation’s freight transportation network.
See the Senate Finance Committee letter and its 82 signers here:
http://waterwayscouncil.org/wp-content/uploads/2013/01/Senate-Finance-Letter-with-logos1.pdf

(As published in the June 2014 edition of Marine News - http://magazines.marinelink.com/Magazines/MaritimeNews) 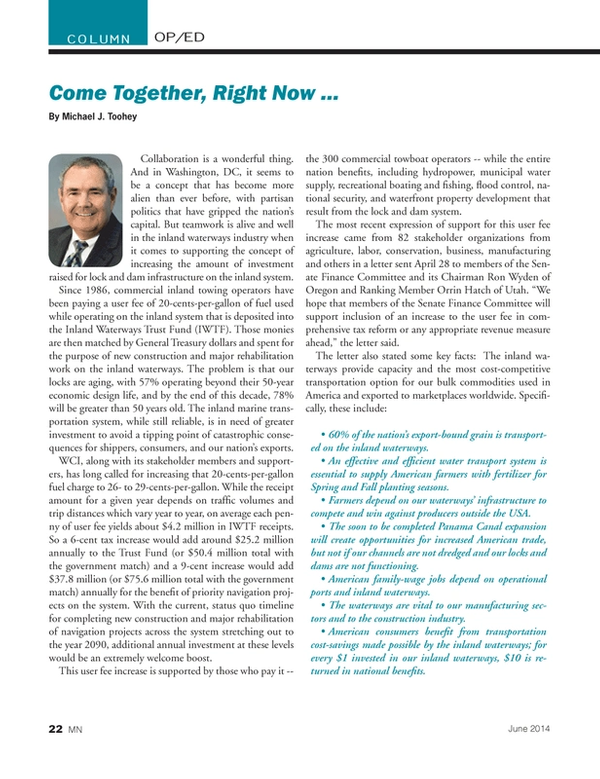