Salvage for the Greater Good

Preserving pristine Coral Reefs in a remote location is no small task, but also of big importance. Global Diving & Salvage shows how it is done.

On June 19, 1991 officials with the National Oceanic and Atmospheric Administration were notified of a 121 foot long fishing vessel shipwrecked and hard aground in the coral reef on the Western Terrace of Palmyra Atoll. The wreck of the Taiwanese long line fishing vessel HUI FENG #1 lay deep into the reef in 20 feet of water, about one half mile to the Northwest of the open waters of the navigation channel into the sheltered safe harbor of West Lagoon.
Lying some 1,000 miles south of Honolulu, Palmyra  Atoll is a national monument and wildlife refuge, cooperatively managed by the US Fish & Wildlife Service (USFWS) and The Nature Conservancy who work together to protect the delicate environments unique to Palmyra. The atoll encompasses some of the last remaining near- pristine reef environment on earth, boasting an intact marine predator-dominated marine ecosystem where over 176 species of hard coral and 418 species of reef fish co-exist and thrive. The slow and insidious destruction being wrought by the HUI FENG #1, and the other wrecks on Palmyra and Kingman Reef, a non-vegetated wildlife refuge reef located 35 miles to the northwest of Palmyra, were identified and plans were put in place to fix the problem.
At Palmyra, the problem lay in a native marine organism called corallimorph that was effectively smothering the corals surrounding the wreck. At Kingman the problem was not corallimorph, but an invasive form of algae feeding off nutrients released from the dissolving wreckage of a burned fishing vessel. In September of 2012 the USFWS initiated the process to contract for removal of the HUI FENG #1, the unnamed fishing vessel at Kingman Reef and the remains of a modular pontoon barge on Palmyra less than affectionately known as “Rust Island”. Eventually, Global Diving & Salvage was called upon to address the wrecks.

Salvage Teamwork
Early in the process, Global Diving & Salvage, Inc. reached out to Curtin Maritime, Inc., a frequent partner in unique and challenging projects. The project at Palmyra and Kingman would prove to be another excellent opportunity to collaborate. Several factors were fundamental in the planning process. Of prime importance was the safety of personnel and equipment. This was followed closely by mitigating the potential of damage to the extremely delicate living coral and reef structure, which would require significant industrial equipment on location. There was also the risk that the vessels contained unknown quantities of pollutants trapped within the hulls. Given the nearly half mile to open water, mobilizing a large crane or vessel to the HUI FENG was impossible.

Surveys, Set Up & Special Situations
During the initial survey a “channel” through the coral had been identified.  Viewed from aerial images this channel was invisible and could only be identified by swimmers as the vertical clearance to the coral was as much a limiting factor as was the horizontal clearance to the stony coral heads at the water’s surface.  Knowing firsthand the constraints of the “channel”, a small and transportable work platform was engineered and special shallow draft transport power scows were designed that would allow safe transit between the work sites and open water.
To provide a safe and stable work platform capable of working in a wide range of weather and tide conditions a jackup platform formed of Flexifloats was designed. The Flexifloats used were 40 feet long and 10 feet wide. When connected together they formed a 40’ x 20’ barge.  4 jackup legs were used to raise the barge clear of the water above the wreck.
The flat deck scows were 24 feet long and 10 feet wide and fabricated from lightweight aluminum with a raised edge coaming around the perimeter that provided 300 gallons of containment volume in case any residual liquids were contained within the recovered material from the HUI FENG.  The scows were designed to be highly maneuverable while carrying 10 tons of material while only drafting 2 feet of water.
The Curtin Maritime tug SARAH C, derrick and materials barges would be moored in the open water of West lagoon and would serve as the base of operations throughout the project. Both the tug and crane barge are EPA Tier lll environmentally compliant. The derrick is ABS man rated with a complete galley and accommodations for the crew.
All diving and specialized salvage equipment was assembled and shipped from Global’s headquarters in Seattle to the Curtin Maritime facility in Long Beach, California where the gear was loaded onto the barge. Palmyra is one of the most remote locations on Earth and the impact of a forgotten tool or spare part could spell disaster as air transport from Honolulu to the Atoll comes with a $50,000 price tag. Transport by sea meant a minimum of 8 days delay for parts to arrive. Reliability and redundancy were crucial elements in the planning and execution of the project.
The salvage flotilla sailed from Long Beach, CA for Honolulu, HI on September 17 with a planned voyage of 20 days en route.  Upon arrival in Hawaii, the flotilla underwent final mobilization of equipment, groceries and fuel.  In this case and in an effort to maintain the pristine environment in the Refuge every vessel bound for Palmyra must undergo a thorough hull cleaning to remove marine growth and mitigate the potential for invasive marine organisms. Vessels are also subject to an extensive, inspection to certify them free of vermin. Rats on the atoll were a big problem in the past; severely impacting the flora and fauna on Palmyra. Eradicating the problem required seven years of research and planning along with extensive and costly measures.

Salvage in Action
Upon arrival Palmyra on October 29 where they were met by the research staff and the balance of the salvage crew who had been transported to the island by chartered aircraft.  The 14 person team composed of divers, riggers, equipment operators and a coral reconstruction expert, along with two USFWS Refuge Managers, immediately commenced work on the recovery project, which, with the exception of shortened workdays on November 28th and December 25th, would continue unabated, 12 hours per day, for 79 days.
With winter weather in the form of heavy wind and sea conditions impacting the area of Palmyra Atoll and Kingman Reef the work plan was quickly adjusted to fit the conditions on location. The original plan called for the work at Kingman Reef to be completed as the first phase of the recovery project.  The decision was made to commence work immediately at Palmyra and await more favorable conditions at Kingman.
The channel between the HUI FENG and open water was once more surveyed and marked with temporary floats. Vessel operators trained in a deepwater mock-up of the gauntlet-style transit path with hairpin turns through shallow water coral heads in order to perfect operations in Palmyra’s unpredictable conditions. The Flexifloat barges and jack up legs were carefully assembled, moved into position, and jacked up into position adjacent to the wreck.
Working with exothermic underwater cutting systems the Global dive team dissected the HUI FENG into sections which were lifted from the sea by the crane on the jack up platform and loaded onto the power scows for transport to the barges waiting in open water. Almost immediately, it became apparent that the HUI FENG had been heavily modified and was of unusual construction with odd layers of steel interspersed with concrete, foam, wood, and steel beams.  The crew also found remnants of fuel and engine oils trapped in spaces within the wreck.
As work wound down on the Palmyra wrecks, the crew then turned their focus on Kingman Reef where the work consisted of recovering the burned remains of a fishing vessel aground in the surf and the scattered pieces of the vessel on shore and underwater on the reef flat and within the interior lagoon.
Faced with a marginal weather forecast the tug SARAH C sailed to Kingman Reef on January 4 to commence the recovery.  Sea conditions on site were not favorable for this yet the crew, working in dangerous surf conditions for this and subsequent Kingman operations, were able to recover, by hand, an estimated 44,000 pounds of debris from the reef.
The project involved the removal and disposal of nearly a million pounds of debris consisting of large piles of rusted steel, fiberglass, wood, concrete and other materials.  Susan White, the USFWS’s project leader for the removal effort, said the debris was “the equivalent of 67 large elephants or 31 city buses and was removed to protect some of the world’s most pristine coral reefs.“
In total, 618,350 pounds of debris and 605 gallons of hydrocarbons were recovered from the HUI FENG, Rust Island resulted in the recovery of 278,000 pounds of iron and debris - a substantial amount of which was picked up by hand using buckets and totes - and the work at Kingman Reef removed an estimated 44,000 pounds of iron, teak and fiberglass from the reef.
With the shipwrecks removed the recovery work at Palmyra Atoll and Kingman Reef National Wildlife Refuges has already begun, as the crews of the US Fish and Wildlife Service and their volunteers work to remove the nearly 740 acre infestation of corallimorph from the reef at Palmyra and the invasive algae attacking the reefs at Kingman.
The shipwreck removal operation, an unusual project by any yardstick, was declared a success by all involved. Working in the remote location with limited resources and the hostile environment of the reef for 79 days without incident, the salvage team combined to cooperate and overcome the enormous challenges the project delivered. Remarkably, the salvage team left the reef in a better condition than they found it. That’s not always the case. But then again, this wasn’t just any job, either.

(As published in the June 2014 edition of Marine News - http://magazines.marinelink.com/Magazines/MaritimeNews) 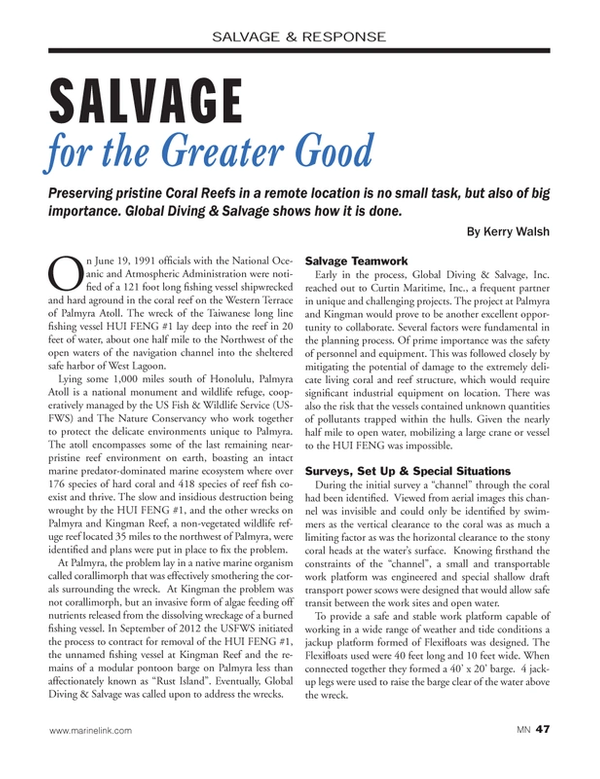 Read Salvage for the Greater Good in Pdf, Flash or Html5 edition of June 2014 Marine News