Maintaining the system of buoys and beacons that guide mariners through our nation’s waterways is the United States Coast Guard’s oldest mission. Tracing its roots to the ninth law passed by Congress in 1790 that moved lighthouses under Federal control, the U.S. Lighthouse Service and its vast portfolio of buoys, beacons, buoy tenders and lightships were a founding part of the U.S. Coast Guard in 1939.

Along with the mission, many of the beacons the Coast Guard maintains today date back centuries. Last year marked the 300th anniversary of the first American Aid to Navigation (ATON), the Boston Light. The legendary lighthouse is one of hundreds of old beacons that light the coastlines of our great nation.

Our first lighthouses were later joined by the thousands of buoys, beacons and electronic aids that help mariners to get home safely and keep our nation’s economy on course. Today, the Coast Guard maintains more than 48,000 buoys and beacons that mark waterways across the U.S. Marine Transportation System (MTS). One of the world’s largest ports and waterways systems, the MTS is a complex, inter-woven and intermodal series of waterways that travels across state and national borders and links our highways, railroads and pipelines to ports around the world. With more than 25,000 miles of inland, intracoastal and coastal waterways that connect 1,000 harbor channels, 300 ports and 3,700 terminals, the Coast Guard facilitates trade moving through the MTS, representing $4.5 trillion in economic activity annually.

The U.S. ATON system enables mariners to determine their position, chart a safe course, and steer clear of hazards – and that system has never been more important. As the Panama Canal expands, Arctic traffic increases and American energy production continues to rise, the size and volume of vessels transiting through the U.S. MTS continues to increase.

The Mississippi River System, also known as the Western Rivers, is one of our most important marine transportation corridors. Approximately 15 percent of the total U.S. freight, including many critical commodities like grain, petroleum and coal, rely on these waterways. These rivers also significantly reduce air pollution and traffic on U.S. roads and railways. With a 60,000 barrel capacity, two tow barges can carry the cargo equivalent of 80 train cars or 300 trucks.

The portion of the Coast Guard’s cutter fleet (construction tenders and river tenders) responsible for constructing the aids to navigation in our inland waterways and maintaining aids to navigation on these major rivers are well beyond their prime and we are seeking to modernize them. With an average of 51 years of service, most of our inland cutters are much older than the crew members who serve aboard them. Among them is the Coast Guard’s oldest active service cutter – the 73-year-old Atlantic Beach, North Carolina-based Inland Construction Tender USCGC Smilax (WLIC-315), commissioned in 1944 during World War II.

Often sidelined by malfunctioning parts that aren’t made anymore, these inland cutters have earned their place in history, but as our Commandant Admiral Paul Zukunft said during his 2017 State of the Coast Guard address, “The time to replace this legacy – or perhaps geriatric class of cutters – arrived over a decade ago.”

Along with modernizing the cutters that maintain our inland ATON, the Coast Guard is leveraging technology to enhance the current U.S. ATON system and provide Marine Safety Information (MSI) in a more useable manner to mariners. Increased demands on aging infrastructure create operational risk that must be managed through improved mariner situational awareness and enhanced navigation.

Among our many initiatives to chart the future of navigation is an effort to integrate Automatic Identification System Aids to Navigation (AIS ATON) into our system of buoys and beacons. AIS ATON are redefining how waterways are marked and providing a new way for MSI to be sent to mariners. With the ability to use AIS ATON in operationally or environmentally restricted areas, the Coast Guard is able to respond to ATON discrepancies and mark navigational hazards in situations where it was previously impossible.

To leverage this versatile capability, we are using AIS ATON in a variety of initiatives. Demonstrating their operational agility, AIS Aids to Navigation were established to mark buoys knocked off station by Hurricane Matthew in the waters around Georgia and North Carolina in 2016. By leveraging the same technology, we were also able to transmit information on restricted zones on waterways around the Republican National Convention in Cleveland and the Democratic National Convention in Philadelphia.

We are not doing this by ourselves. Managing a waterways system as vast and important as the U.S. MTS is a team endeavor. From coast to coast, we are collaborating with the maritime industry and our principal Federal MTS partners – the U.S. Army Corps of Engineers (USACE) and National Oceanic and Atmospheric Administration (NOAA) – on a variety of navigation initiatives.

The Coast Guard is working with the USACE to transmit MSI on the Ohio River near Louisville, Kentucky. AIS is being used to send messages on ATON, weather, bridge clearance, hazardous cargos, lock status and safety and security zones. Kentucky’s largest city was selected as the test bed site because of its strategic location on the Ohio River, a major inland waterway that crosses five states before merging into the Mississippi River.

The Ohio River Test Bed is helping us to determine the best ways to integrate AIS ATON into our existing navigation systems and to bring American waterways into the 21st Century. Together with NOAA’s Office of Ocean Services, the Coast Guard is integrating Physical Oceanographic Real-Time System (NOAA PORTS) information into AIS-Application Specific Messages (AIS-ASM) to broadcast hydrographic and weather data. NOAA PORTS-AIS integration has the potential to dramatically increase the enhanced Marine Safety Information (eMSI) available to mariners.

Through these and other initiatives, we are improving the safety, security and efficiency of the U.S. MTS and the ATON that mark it; these efforts are critical to America’s economic prosperity, trade stability and national security.


The Author
Michael D. Emerson is Director, Marine Transportation Systems & Senior Arctic Policy Advisor for the U.S. Coast Guard. Emerson graduated from the Coast Guard Academy in 1984 with a Bachelor of Science in Government Degree and has since received a Masters Degree in Military Studies from the Marine Corps University, and a Masters Degree in Business Administration from American Military University.


(As published in the May 2017 edition of Marine News) 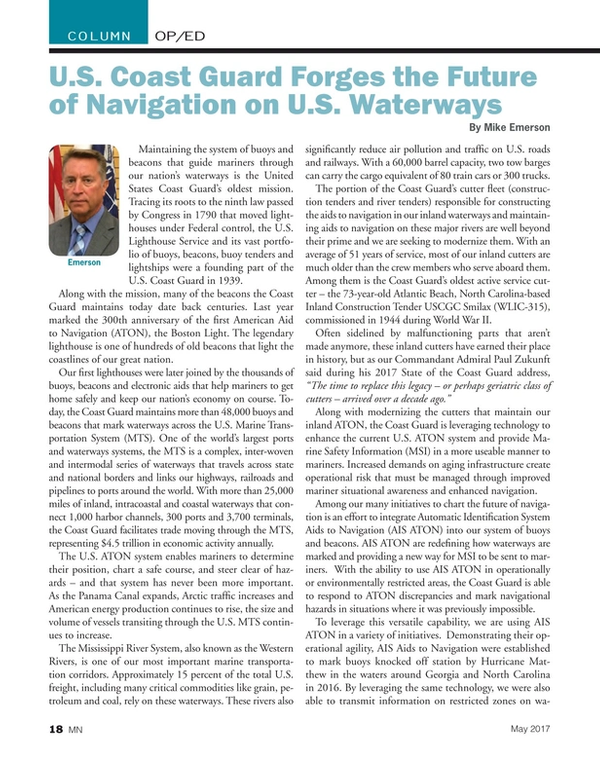 Read Op/Ed: USCG Forges the Future of Navigation in Pdf, Flash or Html5 edition of May 2017 Marine News