What Happens when Commercial and Recreational Vessels Face Off?

A generally sound assumption to make is that many recreational boaters operating power boats and sailing vessels are not very familiar with the maritime Rules of the Road that their professional mariner counterparts understand and adhere to. The unfortunate consequence is a wide array of marine casualties and incidents from collisions, allisions, capsizings, groundings, wake damage, many unreported and countless near misses.

Another safe assumption is that it’s almost certain that when a professional mariner gets involved with a recreational boater, the authorities, most notably the U.S. Coast Guard (USCG) will generally be predisposed to find fault with the professional mariner who “… should have known better.”

And, if the incident is serious enough, receives outsized public exposure or USCG investigators believe sanctions are appropriate for license holders involved in an incident, charges of negligence leading to Suspension & Revocation (S&R) proceedings are a distinct possibility.

While these ‘David vs. Goliath’ type incidents between private craft and larger commercial vessels are certainly not anything new, unfortunately, many impacted professional mariners are often placed in an uncomfortable ‘guilty until proven innocent’ posture when defending their actions.

An Un-Sound Decision
A short review of a not-so-unusual encounter between a commercial passenger ferry and a 30’ powerboat demonstrates the significant difficulty a professional mariner and his/her maritime defense attorney face when things go sideways.

The master of a large ferry in the Pacific Northwest was heading east across calm sound waters under a clear, sunny sky with a full load of passengers and vehicles when off his starboard bow he first saw a smaller boat about 500 yards away on a perpendicular/crossing course directly in front of the ferry’s fixed route. Inexplicably, the 30-footer began to slow considerably, but did not change course. The recreational boat’s operator had now made what would have been close but manageable situation into a potentially dangerous collision.

Now closing rapidly on a likely collision course with the boat, the ferry’s master reduced speed and turned abruptly to starboard to avoid what he deemed would either be a collision or, minimally, a swamping of the smaller vessel if he continued on his plotted track. The ferry’s emergency maneuver, however, had the unintended consequence of taking the large vessel out of the dredged channel and its safe bottom clearance into shallower water resulting in a ‘soft’ grounding.

With many passengers documenting the slowly unfolding incident in photographs and video, the incident went ‘live’ and viral on a bevy of social media platforms and quickly became the subject of a ‘breaking news’ story on local television and radio broadcasts. That’s when and how the USCG became aware of the incident, and its investigators were not pleased to be among the last to know.

Meanwhile out on the sound, the ferry’s master was fully occupied trying to free his vessel from the sandbar when he saw a USCG cutter approaching his position. Knowing that he had not yet reported the grounding to the authorities and realizing USCG investigators would not look favorably on that omission, he promptly notified his dispatcher who, understanding the potential negative implications to the company and its captain, immediately contacted the license insurer (that the company had purchased license insurance from) to rapidly intervene and handle these exact types of incidents.

Within minutes, a local maritime defense attorney contacted the ferry captain on the cell phone number provided by the dispatcher and prepped him for the crucial impending marine casualty interview. Very soon thereafter, USCG investigators pulled alongside and boarded the still grounded ferry and conducted what witnesses reported was a rather “heated discussion” with the master and other bridge personnel before taking contact information from ferry passengers who offered their photos and videos of  the encounter.

Two days later, the captain and his attorney attended a formal interview with USCG and heard nothing more until six weeks later when the captain received a “Warning in lieu of Suspension & Revocation” letter from USCG for a violation of Law or Regulation (46CFR 5.33) or “…while serving as operator of said vessel, you failed to adhere to Inland Navigation Rule 18 by failing to keep out of the way of a sailing vessel while underway.”

Lesser of Two Evils
The captain’s license defense attorney reviewed USCG’s complaint and, after discussing the pros and cons of accepting the Letter of Warning (LOW) sanction, both the captain and his attorney decided to accept it rather than take the risk of losing an argument before an Administrative Law Judge (ALJ) over what constitutes “…prudent evasive maneuvers and safe operating speed in congested waters…” and receiving a more severe sanction, including a significant USCG license suspension. Such an outcome would have not only obvious negative consequences for the captain, but also for his company which would be losing and needing to quickly replace a valuable member of its team in whom it had invested significant time and training.

Clearly, the master’s employer’s full support and backing of his actions throughout the almost two month ordeal was a key factor in his decision to accept the LOW, knowing that his job security was not in jeopardy. The fact that ferry company management was well aware of the multitude of risks confronted by its bridge officers operating in often perilous vessel traffic conditions and prudently invested in license defense coverage for its officers, paid a significant dividend in this incident.

There is rarely a completely happy (or inexpensive) ending to cases like the one described above, just like there is no avoiding the competition for space with recreational boaters and their operators. The clear ‘takeaway’ is that when there are incidents between commercial vessels and pleasure craft – fairly or unfairly – the professional mariner will invariably be held to a higher standard … even if his or her actions ultimately prevented a more serious casualty.


The Author
Randy O’Neill is Senior Vice President with Lancer Insurance Company and has been Manager of its MOPS Marine License Insurance division since 1984. Over the past 29 years, O’Neill has spoken and written on many occasions on the importance of USCG license protection. He is a regular contributor to Marine News magazine. He can reached at: [email protected]


(As published in the January 2018 edition of Marine News) 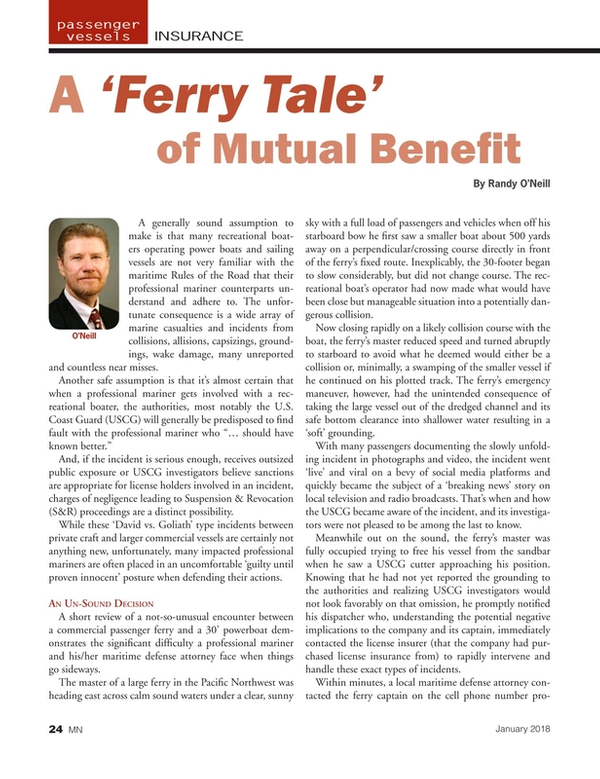 Read What Happens when Commercial and Recreational Vessels Face Off? in Pdf, Flash or Html5 edition of January 2018 Marine News