As the domestic offshore energy industry stirs ever so lightly, the task of reactivating long-dormant vessels – some with extensive hull fouling – will become Job ONE. That’s easier said than done.

Care and Preservation of Ship Hulls: Workboats vs. Deepwater Vessels
Never before has there been such a wealth of data on the processes relating to the fouling of ship hulls. The formation of biofilms and subsequent micro- macro-and bio-fouling has been examined in minute detail and the effects of various coatings have been carefully documented for many classes of ships and marine environments.

The relation of hull condition to fuel efficiency has also been examined in detail. For oceangoing vessels, there are opposing processes: on one hand, the faster the ship moves through the water, the slower the growth of marine life on the hull; on the other hand, the more marine life grows on the hull, the more resistance against ship speed.

It has been estimated by the Clean Shipping Coalition that a fuel savings of 15 to 20 percent could be realized if the “best available” coating technology were matched to vessels, properly applied and maintained. The corresponding decrease in emissions is also worth considering. Even a small amount of smooth surface disruption on a ship propeller or hull can produce enough turbulence to reduce fuel efficiency. Hence, the motivation for controlling hull fouling is significant.

Another important consideration is the effects of biofouling on the marine ecologies of ports. The deepwater vessels that transport cargo across vast oceans also have a propensity to transport viable marine life. These invasive species can upset the regional ecologies and the mechanisms for transporting these are regulated by the International Maritime Organization (IMO).

Herein lays the important question: how much fouling can be tolerated by deepwater vessels as compared to workboats? The key elements include hull efficiency, and the effort to reduce emissions, and the other is Invasive Aquatic Species (IAS).

Deepwater Concerns
The IMO has established comprehensive guidance with respect to biofouling. For oceangoing vessels, it is critical for all stakeholders – ashore and on board – to keep hulls free from fouling. This impacts both economic and environmental bottom lines. Ballast tanks also need to be managed, as these can be breeding grounds for invasive species; a much greater challenge for deepwater vessels compared to brown water workboats.

One resource available to ship owners regarding this issue is the encyclopedic nature of catalogues of marine species that are observed on ship hulls by various research organizations. Another resource is the 2017 pictorial standard for underwater evaluation of biofouling, published by NACE International, which is designed to facilitate more consistent descriptions of the degree of biofouling on a vessel hulls. No less important is the impact of fouling and biofouling on anticorrosion coatings. Hence, the newly released standard practice authored by NACE is an essential tool for marine corrosion specialists.

According to the standard, “the rates of biofouling accumulation vary considerably, depending on the suitability, age and physical condition of the coating system(s) applied to the hull, the voyaging, anchoring and lay up patterns of the ship, and the geographical regions where these take place.” Therefore, the need for a pictorial standard and knowledgeable marine corrosion engineers to evaluate the conditions of coatings of ships is imperative.

For deepwater vessels, both fuel costs as well as the rapidly evolving enforcement of BWTS installations encourages timely and close attention to management of coatings. On the other hand, workboat coating management can be haphazard because increases in fuel costs may be tolerated as the transport of invasive aquatic life is typically not an issue.

There is less margin for error with deepwater vessels as compared to workboats. Sophisticated coating technologies are carefully selected, applied and monitored. Oceangoing vessels incur huge losses when in port not only because of lost revenue but also because the increased potential for fouling and corrosion when not in use.

What about Workboats?
The typical operating profile of a workboat differs greatly from deepwater vessels. Workboats can include slow speed and layup vessels as well as medium-range vessels with speeds up to 20 to 25 knots. They can include coastal tug and barge fleets as well as cruise boats and ships for the military where there are long lay-up periods.

Regardless of the class of vessel, fouling control is essential to hull maintenance. The common denominator between workboats and deepwater vessels is the care and preservation of the hull. Fouling and biofouling can shorten the life of anticorrosion coatings, requiring expensive downtime and shortened life cycles of workboats. In this regard, there is little difference between coatings for workboats and deepwater vessels. That said; workboats typically have easier and more frequent access to divers and hull cleaners.

If the owner of a workboat entrusts the application of coatings to unskilled or unqualified contractors, the reliability may be compromised from the outset. Even though the same high-quality coating may be used as on a deepwater vessel, the reliability of that coating is highly dependent on its proper application.

Types of Coatings
The two basic purposes of coatings are to protect the hull from rusting and, secondly, to protect the anticorrosion coating from fouling and biofouling. Marine life can have a detrimental effect on the protective paint on ship hulls; the anticorrosion coating is the last line of defense. Once this coating is compromised, the steel hull is exposed and the vessel could be damaged beyond repair. For this reason, control of fouling may be even more important for workboats, because these vessels are more often idle and so are more susceptible to fouling and biofouling.

Fouling-control coatings include Anti-Fouling (AF) coatings and Foul-Release (FR) coatings. The former rely on biocides; the latter rely on mechanical properties to decrease adhesion strength. AF coatings typically are sacrificial coatings. They gradually wear off to the expose fresh layers of biocide agents. The development of coatings today must also take into account the release of toxic substances into the environment, from surface preparation efforts to paint application. Use of various coatings must be balanced against the other downstream consequences such as fouling, increased GHG emissions, etc.

Silyl-based AF coatings are less dependent than others on a vessel’s movement through the water. Self-polishing AF coatings are characterized by a biocide release rate. This is the polishing rate for the coating. It should be noted that standard acrylic resin-based AF coatings can decrease roughness over time as a consequence of the polishing effect but will experience increased fouling as the biocide content at the coating surface decreases over time. A roughness reading can be taken at drydock and by divers evaluating the fouling degree in service to characterize the roughness of the coating and this can be related to fuel cost.

Knowing the vessel’s operating profile, it is possible to build a system that provides a five-year antifouling performance. Software can be used along with the operating profile to calculate film thickness. In this manner, the AF coating can be tailored to the needs of the customer, providing a much better fuel economy by controlling the roughness of the hull.

The method used to clean the ship hull is another important factor to consider. The cleaning schedule and methods depend upon an intimate knowledge of fouling processes. The adhesion of marine life to the ship hull depends on the type of coating as well as the species. The cleaning method chosen will depend on the degree of fouling or biofouling and the potential for the cleaning method to damage the various layers of coating. There will typically be several cleaning cycles before a new coating needs to be applied. The various degrees of adhesion of marine life to ship hulls and optimal cleaning methods have been recently reviewed by Oliveira and Granhag in “Matching Forces Applied in Underwater Hull Cleaning with Adhesion Strength of Marine Organisms” [4].  There are no standards, nor widely agreed upon methods related to hull cleaning. This “wild west” situation can best be solved by standardization which would be greatly facilitated by the creation of a hull cleaners association.

Conclusion
Perhaps the best investment workboat operators can make is to consult with a hull performance specialist on the best practice for his or her particular class of workboat based on the climate and working conditions the workboat is under. This can help ensure that a coating is applied according to manufacturer specifications and also develop a hull cleaning regimen that will maximize the life of the coating and the workboat. The recommended policies will be recouped in fuel savings, reduced downtime and longer vessel ‘up-time.’

Advanced coating technologies developed for deepwater vessels are also available for workboats. However, their proper application and management requires a well-trained specialist in the area of marine corrosion at every stage of coating management.

Buddy Reams is NACE International’s first Chief Maritime Officer, a position he started in April 2016 after retiring from nearly three decades of service to the United States Coast Guard. He leads the development of corrosion control programs and services to meet increasing demand from all maritime industries including notably the shipbuilding, shipping, and offshore sectors. Prior to joining NACE International, his last assignment was as Chief of Maritime Prevention Operations for the Seventh Coast Guard District. Reams holds Bachelors and Masters of Science degrees in Naval Architecture & Marine Engineering from the US Coast Guard Academy and University of Michigan. He also holds a Master of Science in Industrial Operations Engineering from the University of Michigan. 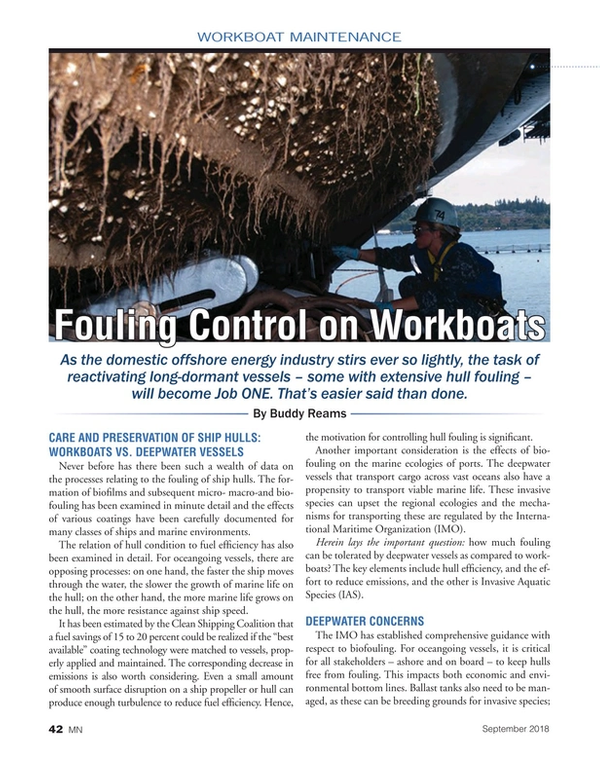