Offshore Optimism is Cautiously on the Rise

Following the path of oil prices, consolidation also follows myriad financial crises. What happens next isn’t altogether clear, but the long, deep trough for offshore energy may finally be in our choppy wake.

In mid 2017, financial turnaround and financial repairs specialist Alix Partners made a bold statement regarding the beleaguered Offshore Service Vessel (OSV) marketplace. In a July 2017 report, following an analysis of 44 participants in the business, the restructuring team wrote: “The industry faces grave financial pressure, which is clear from recent bankruptcy filings and distressed mergers … Exploration and production (E&P) companies have drastically reduced their rig counts, causing demand for OSV services to plunge.”

After slogging through considerable OSV doom and gloom, they added, “On the bright side, positive trends including M&A opportunities, effective cost reductions, and stronger capacity discipline are on the rise.” Elaborating on business combinations, Esben Christensen, Managing Director and co-leader of AlixPartners’ shipping team, remarked, “Operators who leverage the current market situation to successfully trim their balance sheets are likely better positioned to withstand a prolonged downturn and ultimately potentially drive the consolidation so badly needed within the sector.” These prescient words are arguably coming home to roost.

Getting From There to Here
Offshore exploration activity will depend on an amalgam of spot prices (driven by supply and demand) and the future outlook (as pictured in the “forward” pricing curves for oil futures and swaps). In broad terms, when spot prices are high, forward expectations also rise. Companies will then invest – including in exploration which drives OSV demand and newbuild activity – this happened with a vengeance in the period from 2011 to 2013. Like all maritime segments, the pendulum swings both ways; when oil prices fall, producers pull back on exploration and, where they can, they will “shut in” wells – freeing up capacity serving production, subsea well service, and others like seismic.

With falling prices in 2014 through early 2016, the large scale stacking of rigs and vessels serving the fields was inevitable. After OPEC opened its spigots in late 2014, spot prices plunged, reaching a nadir in early 2016, when prices for marker grades West Texas Intermediate (WTI) and Brent both bottomed at about $27 to $28/bbl. Oil production onshore was surging, even at the low prices, with a “contango” structure where prices for future delivery were down from 2011-2013 levels, but still exceeding those for nearby consumption. All stockpiles were filling up to the brim; and “floating storage” buoyed hires for large tankers.

But with low nearby prices portending a seemingly bleak future, offshore exploration was put on hold after the price plunge. The drop in E&P spending was dramatic, with Alix Partners writing (in Spring 2017), “… the total global E&P spending on OSV’s has declined from USD $18.1 billion in 2014 to USD $14.8 billion in 2015 and USD $11.9 billion in 2016. That is a staggering 34% decline in just two years. Rates are down 60-65% in some markets, and utilization is down 40%.” In early 2018, even as the upward move was clear, Rune Olav Pedersen, the CEO of Oslo-listed seismic exploration specialist PGS, told investors: “Faced with a lower oil price compared to 2014, our customers have changed their priorities.”

The production and inventory data provide the backdrop for this story. Statistics from the U.S. Energy Information Administration (EIA) peg overall world oil production at 90.78 million bbl /day (mbd) in 2012, with a miniscule rise up to 91.28 mbd in 2013. The following two years saw production surge dramatically to 93.79 mbd in 2014 (a gain of 2.51 mbd) and 96.7 mbd 2015 (a gain of 2.91 mbd). Inventories swelled during this time; data compiled by the International Energy Agency (IEA) shows that stocks among its members (developed countries) had stood at around 2.7 billion barrels throughout 2012, 2013 and into the middle of 2014. By mid 2015, OECD stocks approached 2.9 billion barrels, with levels hovering at near 3.1 billion barrels well into 2017.

For offshore exploration outfits, first and then for other offshore service providers, the situation was dire throughout the globe, with the nadir occurring in 2017, though early signs of trouble ahead were seen in Singapore. Following a tense summer of 2016, Swiber, a listed company, entered into “Judicial Management” (similar to “Administration” – in this case recently extended through November, 2018). A month later, in Norway, three firms- controlling 152 OSVs among them, Deep Sea Supply, Farstad Shipping and Solstad Offshore, agreed to merge. By May, 2017, a new company, rebranded as Solstad Farstad, listed on the Oslo Stock Exchange (active in the North Sea but also in the Mediterranean and Asia), emerged. In March 2017, another Singapore listed OSV owner, Ezra Holdings, filed for Chapter 11 bankruptcy in the U.S. The case is still grinding through the U.S. bankruptcy courts. In France, Bourbon Corporation, presently controlling the sector’s largest fleet, reached a deal with its capital providers in April 2018. It can buy time, positioning for the market recovering, by temporarily delaying servicing its loans and leases, and defering interest payments to bondholders.

Among the U.S. listed players, GulfMark International took the a “pre-packaged” Chapter 11 bankruptcy route in a May 2017 filing, and came out the other end six months later, in November. In this arrangement, $429.6 million of outstanding bonds were converted into equity, with $125 million of new equity capital raised. The much larger Tidewater Inc. (NYSE: “TDW”) had seen its business decline to the point of being forced to enter into a similar pre-packaged bankruptcy filing , also in May 2017, with its restructuring of approximately $1.6 billion of debt finalized two months later.

Separately, Hornbeck Offshore Service (NYSE: “HOS”) dodged the bankruptcy bullet with very adept financial footwork. In June 2017, it refinanced its $200 million credit facility with a new credit facility providing for up to $300 million of term loans. Importantly, the “runway was extended”; the new credit has a maturity in 2023 – three years farther into the future than the first set of loans.

Brighter Outlook
Fast forward to 2018: the offshore oil world has continued to see a brighter outlook, after a multi-year stretch of reduced activity, and oversupply. Market strength is slowly bringing increased activity offshore, especially vessel-intensive exploration. Amidst talk of OPEC increasing its production (lest prices move above the $70-$80/bbl “sweet spot” for developed economies), inventories had retreated to levels below their 5 year averages, with overall OECD stocks (as reported by IEA) now at to around 2.8 billion barrels. The EIA production estimate for overall 2018 (part actual and part forecast) shows a healthy gain to 100.16 mbd (output gain of 2.15 mbd), and a further gain in 2019 up to 102.54 mbd overall production (a gain of 2.38 mbd).

Looking to the future, where OSV activity typically lags Final Investment Decisions (FID), the brighter outlook translates into real future business prospects. Consultants Rystad Energy, in a June 2018 ‘Oilfield Service Outlook,’ say “… at $75 oil have resulted in a pick up of the global oilfield service industry. Investments will rise and oilfield service purchases will grow on average by 8% towards 2021.” The Oslo-based expert adds: “The current tailwind in the oil market is likely to propel 100 new offshore projects to be sanctioned in 2018. This compares to only 60 projects in 2017 and less than 50 in 2016.”

The service providers are feeling the optimism. In a late July earnings conference call, reporting 2018 Q2 results, Patrick Schorn, Schlumberger’s Executive Vice President, told investors: “… once the recovery starts, we obviously start seeing it on land and we clearly are now having very clear evidence of what is happening in the shallow offshore … Equally, we are preparing ourselves further for deepwater to start gaining as well.” Similarly, the re-organized Baker Hughes (“BHGE”), its Chairman/ CEO, Lorenzo Simonelli, told listeners on its Q2 call “… as I go around and also speak to the customers and as you look at people starting to firm up their plans for 2019, you are starting to hear more about CapEx increases and projects moving forward.”

The shape of things to come
Interestingly, in announcing its 2017 re-financing, Hornbeck said,“The New Credit Facility may be used for working capital and general corporate purposes, including the acquisition of distressed assets and/or the refinancing of existing debt, subject to, among other things, compliance with certain minimum liquidity (cash and credit availability) requirements.” Reinforcing that train of thought, In April 2018, Hornbeck bought four OSV’s from Aries Marine, a supply boat operator based in Lafayette, La.

(This article first appeared in the September print edition of MarineNews magazine.) 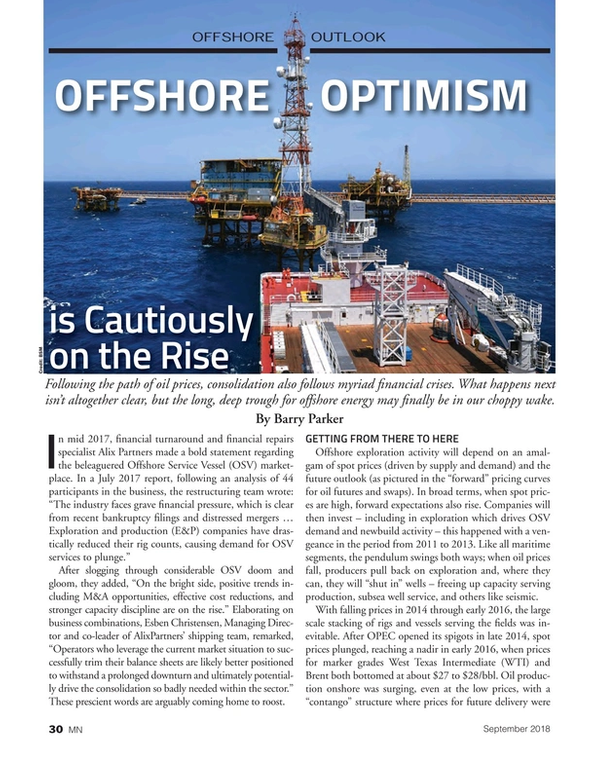 Read Offshore Optimism is Cautiously on the Rise in Pdf, Flash or Html5 edition of September 2018 Marine News