Cenac Marine Services and its dynamic, third generation leader, Arlen “Benny” Cenac Jr., continue to flourish, in good times and bad. Through it all, leadership, philanthropy and investments that extend far beyond the company’s gates have made all the difference.

As this year quickly churns to its inevitable close, Cenac Marine Services isn’t the nation’s biggest towboat operation, but its profound impact on the people and environment of the U.S. Gulf Coast and beyond is unquestionable. At a time when most operators are happy to simply strive for an environmentally correct and regulatory compliant business signature, Arlen “Benny” Cenac Jr. regularly reaches outside his core business of towing and transportation to improve the lot of those around him, and the world they live in.

Some would argue that all that philanthropy and community investment is nice, but doesn’t have anything to do with Cenac Towing’s ongoing success. Nevertheless, Benny Cenac would tell you that the two efforts are inextricably entwined. In Cenac’s world, then, the philosophy of ‘making all the boats float when the tide comes in’ has yielded fruit for more than 90 years. According to Mr. Cenac, even as he navigates the rapidly changing landscape of the domestic Jones Act business climate, the Cenac way of doing things is one thing that won’t.

Core Values
Cenac Towing today finds itself operating about 100 marine vessels with a full-time staff of 400 marine professionals. But that doesn’t tell the full story of where all that emanated from. The company is guided by the values and principles established by Benny Cenac’s grandfather, Jock Cenac, over 88 years ago: a commitment to employee satisfaction and great company morale. Cenac takes pride in continuing the legacy started by his grandfather that was continued by his father, Arlen Cenac Sr., until it was passed down to Benny in 1981.

A third-generation owner of Cenac Towing Company, originally founded in 1927, Benny, has led the company since 1981 through several industry hardships by focusing on customer service, efficiency, quality and safety in its marine transportation services. Cenac Marine Services has clients across the country and focuses primarily on transporting liquid petroleum barges.

Cenac is guided by the values and principles established by Benny’s grandfather over 85 years ago: a commitment to employee satisfaction and great company morale. Benny takes pride in continuing this legacy, and is certain that all current employees would share that the company operates as a family and everyone from the boat captains right on down to the security guards are treated as such.

In addition to Cenac, Benny owns several other business entities in the gulf coast region, touching a wide-range of industries such as retail, manufacturing, wholesale and agriculture. As an entrepreneur at heart, Benny enjoys seeking out new business opportunities across the region, in part because it helps cultivate a strong local economy.

Local Roots, Global Reach
Arlen “Benny” Cenac Jr. has been described as a Louisiana-based entrepreneur with global reach. In fact, Cenac’s entrepreneurial streak is widely credited with being the driving force for success for Cenac Marine Services. But, Mr. Cenac’s first entrepreneurial mountain was climbed when he assumed sole control of the family business and took major risks in a large expansion and modernization of the existing fleet. His expertise in construction and operational management of towing assets allowed the company to blossom and grow exponentially. Eventually, this success led to a sale of all of the company’s assets. Nevertheless, and after the sale, Cenac’s entrepreneurial spirit still burned brightly.  Eventually, he recreated the company based on the traditional values of Cenac Towing and has managed the business to even greater heights today.

Benny Cenac is often quoted as saying, “Bigger is not necessarily better.” Hence, the Cenac model for what is ‘better’ has the firm, in his mind, ‘right sized’ for its intended missions. That’s because Arlen “Benny” Cenac Jr. has always believed that customer service, reliability, and technology were the most important components in towing excellence. His close attention to the size of the fleet allows him to be hands on for the concept, design and construction of every barge and boat Cenac has ever built. This model has served the company well by allowing all aspects of the operation to be properly sized for his personal attention. In an industry where some operators ‘make do’ with acquired assets that might not be just right for the job at hand, Cenac Towing operates only fit-for-purpose hulls with a high level of efficiency.

Cenac Towing: Business Excellence 101
Benny has led the company through multiple industry downturns and always emerged even stronger as the tide rises. As those industry downturns impact and ultimately absorb other firms, Cenac Marine Services’ success has allowed them to build on a solid financial base. Arlen “Benny” Cenac Jr. navigates the downturns by investing in construction and modernization at lower costs. And, he insists, “Efficient allocation of financial and human resources during these downturns has positioned the company uniquely and aggressively to have a competitive advantage in the marketplace when the inevitable cycles occur.”

For example, Cenac Towing’s 2015 acquisition of Main Iron Works (MIW) is noteworthy in that it married an experienced, well-regarded shipyard to an established transportation leader. In fact, MIW built the majority of the Cenac fleet. Cenac’s mother’s father started MIW and built the majority share of Interstate Transportation’s fleet, Dixie Carrier’s fleet, and Harvey Gulf’s fleet, and most of those boats are still in operation today. Cenac adds quickly, “We have always been a company that believes in internal repairs and construction of our fleet, so this acquisition was the perfect fit for our company’s overall goals.”

With the addition of MIW to the Cenac portfolio, Cenac joined a growing number of operators who own and operate their own tonnage but also can build from within at their own yards. Eliminating the middle man does create economy of scale, but that’s not necessarily what Benny Cenac was looking for when they brought the yard into the Cenac portfolio. “It’s not a question of less expensive tonnage, but the internal controls of the equipment and being able to assure our customers, construction staff and repair staff that jobs are completed in a professional and timely manner.”

Safety First
Benny’s focus on his people and by default – an ironclad focus on safety – has served the company well. The safety of his team is and has always been of utmost importance to Cenac, and therefore training is key. In addition to tankerman training being utilized with their partnership with South Louisiana Community College (SLCC), team members also participate in simulator training with the school as well. This gives Cenac professionals additional hands on training that is the bedrock to furthering their professional development. You can’t do that unless you do it safely. To that end, the company has also been awarded the LWCC Safest 70 Award several years in a row.

Where the advent of subchapter M is giving some firms headaches, Cenac seems to be sailing through the transition nicely. That’s in no small part a function of Cenac’s participation in the AWO’s RCP program – something most would credit as the nexus of today’s regulatory rules. It’s ‘no accident’ that Cenac has been an AWO member since its beginning, and is fully SubM Compliant today. In fact, Cenac Marine Services was issued one of the very first Certificate of Inspection’s (COI) as subM kicked off. On the journey to full compliance, Cenac awarded a Third-Party Organization (TPO) contract to ABS, a recognizable stakeholder on the domestic waterfront. Cenac chose that route and ABS because of their reputation, resources and man power.

Outside the Gates: Giving Back
As an avid philanthropist to the gulf coast region and strong supporter of coastal wetland restoration, Cenac’s reputation is almost unrivalled. Beyond the company’s donation of a spud barge to Terrebonne Parish, this philanthropy extends to multiple areas. That’s because, over time, coastal conservation efforts, coastal restoration and preservation have been a cause that Arlen “Benny” Cenac has recognized, embraced and robustly supported for decades. Where some firms point to a “green footprint,” Cenac lives that policy at work – and at home. That outreach extends to protecting the land that he lives in and loves, through, as one example, the creation of his own levee system on his personal property in order to preserve the marshes in the area.

Cenac’s partnership with SLCC yields tanker operations and simulator training for all wheelhouse members, while at the same time, gives hands on experiences to others that would otherwise not made available to the public. Cenac explains further, “Not only are Cenac employees able to utilize the barge for improved hands on training, but some of our boat captains have been certified by the Coast Guard and have given their time to train other tankerman during their time off. This allows us to improve our employee training while also providing tools for others to improve their learning experience while enrolled in SLCC’s maritime training courses. It’s a great partnership for all involved.”

Leadership: on the water, in the community – and beyond
Leadership means different things to different people. In Benny Cenac’s case, it means treating employees and mariners as family. But, this type of philosophy and operations model is easier talked about than it is to put it into real practice. Nevertheless, the family approach has been an integral component of the long term success at Cenac Marine Services. But, Benny Cenac does more than just talk about it.

Leadership also means being out front on industry trends. Over time, Cenac has led the marine industry with many ‘firsts.’ These include being the first to institute the U.S. Coast Guard tank barge self inspection program, and with the Coast Guard’s approval, the first to institute its own tankerman training program. As part of Conoco’s Magnolia project, they were the first company to moor a liquid petroleum barge to a dynamic positioning drilling rig in the Gulf. And, of course, Cenac was one of the first companies to build a fleet of double skinned barges, well prior to it being required by the regulations.

Away from his primary day job, and as a dedicated leader in his community, Benny has served on several boards and committee’s, including Nicholls State University College of Business Advisory Board, Nicholls State University Foundation and Restore or Retreat. Benny is also a member of Waterways Operators, South Central Industrial Association, Bayou Community Foundation and Greater New Orleans Foundation.
A devoted philanthropist, donating both his time and money to dozens of regional, national and international causes, his community reach impacts thousands of people in Louisiana, and beyond, every day.

Right Sized for the River Ahead
According to their web site, Cenac Towing Company operates approximately 38 boats, 68 barges and has 400 employees, stretching across almost a century of rich history. We asked Cenac’s chief executive where those numbers might be in five years and beyond that, ten. In other words, what’s the long term strategy? “The fleet will always be maintained at the level where Cenac Marine Services customers can receive the sustained excellence they have come to expect,” he explained, adding quickly, “It will always be large enough to accommodate growth but small enough to maintain the high performance levels we deliver to every customer, every day. The fleet represents the best in safety, technology, reliability, and efficiency. Those core values will drive any expansion over time.”

Indeed, core values have always been at the heart of this firm’s existence; on the water, in the shipyard and outside the gates in the greater community. Along the way, no one can deny that Arlen “Benny” Cenac Jr. has navigated a curiously different course to success. And, that’s made all the difference.

This article first appeared in the December print edition of MarineNews magazine. 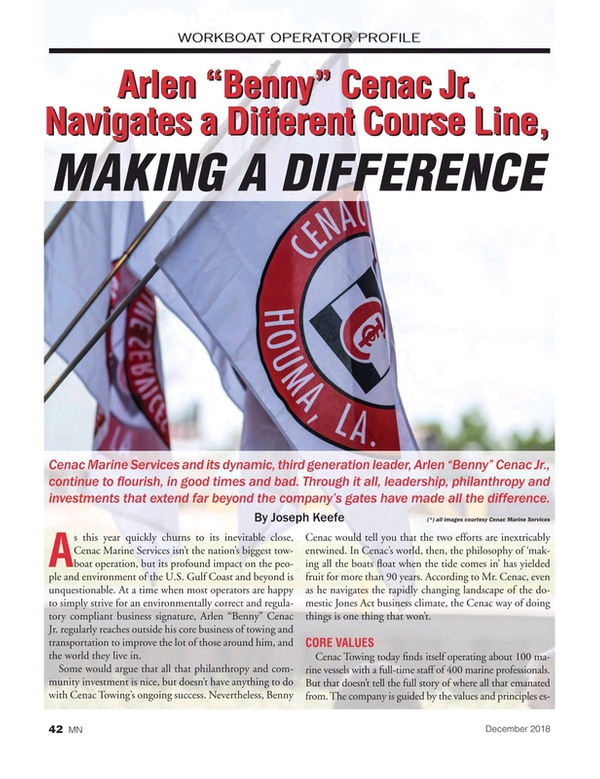