The evidence and industry subject matter experts both say ‘yes.’

In its recently released SAFER SEAS DIGEST, Lessons Learned from Marine Accident Investigations (2017), the National Transportation Safety Board (NTSB) reports investigating numerous accidents across all modes of transportation where a properly implemented safety management system (SMS) could have prevented injuries, loss of life, or material damage. That document spans analysis of casualties across the full spectrum of all manners of marine craft, blue water and brown, foreign and domestic.

Different authorities and subject matter experts (SME) differ on how they might explain a SMS, but it all adds up to one thing. But, what is a Safety Management System? A sampling of descriptive language is a good place to start:

Safety Management Systems in Practice
Safety Management Systems (SMS) have been around a long time, and take their most prominent roots from blue water shipping. Eventually – in places like the towboat industry’s newly regulated Subchapter M rules – those procedures and systems found their way into brown water operations. They are here to stay. Some passenger vessel operators have had their own unique SMS up and running for years.

PVA’s Flagship SMS, for example, is a voluntary safety management system that is tailored for domestic passenger and small passenger vessels. The PVA Flagship SMS was developed in cooperation with the U.S. Coast Guard, and in December 2016, PVA submitted Flagship SMS to Coast Guard Headquarters for acceptance. On June 12, 2017, the Coast Guard's Director of Inspections and Compliance formally recognized PVA's Flagship SMS as an acceptable method for developing and implementing a company specific voluntary SMS. Specifically, the Coast Guard determined that Flagship SMS meets the objectives and functional requirements of a SMS as per 33 Code of Federal Regulations Part 96, Rules for the Safe Operation of Vessels and Safety Management Systems. It provides the framework to develop, implement and maintain the SMS.

That effort is now yielding fruit. Dozens of PVA member companies, representing nearly 200 vessels have requested the framework and tools associated with Flagship SMS. Being a voluntary system, members implementing Flagship or its elements do not need to have third party verification. Much like the approved Alternate Security Program, the PVA Flagship SMS incorporates internal audits to determine the effectiveness of implementation.

Regulators & Operators: a unique safety partnership
Captain Lee Boone is the Chief of the U.S. Coast Guard’s Office of Investigations & Casualty Analysis. Assigned to U.S. Coast Guard Headquarters from 2008 to 2012, he led the U.S. Coast Guard’s Domestic Vessel Compliance Division, responsible for U.S. Flag marine inspection policy. Boone knows a problem when he sees it, and in most cases, what to do about it, when he does.

More than a few domestic passenger vessel operators use SMS in their daily operation. Some do not. That’s because, despite being a heavily regulated sector, SMS is not required for passenger vessels. Boone answers the obvious question by saying, “The Coast Guard encourages the implementation of best practices, like SMS’s, even in the absence of regulation. Successful operators will probably tell you that compliance with safety standards is but one ‘fruit’ of an SMS and healthy safety culture. The beauty of a voluntarily implemented SMS is that everybody knows that you’re doing it ‘because you want to, not because you have to.’ This is a powerful commitment to safety that goes beyond posting ‘safety first’ signs.”

Similarly, Richard Paine, the Regional Director, HSSQE, for Hornblower NYC Ferry and Statue Cruises has his own opinions. Hornblower’s commitment to safety and customer service is something that has been at the heart of the organization since its early years. “I’ve been with Hornblower for over ten years and to see what we have been able to accomplish and provide our crews and the public is something I am very proud to be a part of,” he told MarineNews, adding quickly, “Our management system is an integrated management system that focuses on Quality, Health & Safety, as well as environmental stewardship. Our robust system is certified and audited at the highest level under the ISO 9001, ISO 14001 & ISO 45001/OHSAS 18001 standards.”

Notably, explains Paine, each of Hornblower’s operations – from coast to coast – have some differences in their system, related to types of services offered and their fleet, but overall share the same commitment to continual improvement.

Measuring Success: ROI comes in many forms
Some SMS advocates tout a ‘return on investment’ of an SMS. But, measuring that ROI means different things to different people, and isn’t necessarily a linear metric. Paine explains it from the operator’s standpoint, saying, “A strong SMS will allow operators to monitor and measure equipment usage to determine how best to procure parts inventories, or how to use information from a near-miss incident to prevent an injury. Accidents will still happen, but an effective SMS will minimize exposure by closing holes in an operation that may lead to ‘swiss-cheese’ effect, which means that incidents and injuries don’t happen because of just one hole or error, but instead multiple layers of problems that allow an incident to take place.”

Measuring success can be achieved via data collection and seeing a reduction in injuries, incidents or damages. It can be measured in reductions of insurance premiums, fines or turnover. It can be measured by having zero non-conformities during an audits or no 835’s in a USCG inspection. Paine puts it a different way. “The quantitative data speaks loudly, but I believe the most successful way to measure safety is by watching your people. Do they take drills and training seriously? Do they hold others and more importantly, themselves accountable for working in a safe environment? If the answer is yes, to any of those questions, then that is how you can truly not only measure, but define ‘success.’ Safety is about people. Hornblower’s top priority is to maintain and safety for all of our passengers.”

Separately, the NTSB recently issued the Coast Guard two safety recommendations (M-02-5 and M-12-3) to require all operators of U.S.-flag passenger vessels develop and implement a preventive maintenance program, and a safety management system, respectfully. These recommendations were reiterated as a result of the Island Lady casualty in January 2018. Captain Boone adds, “The U.S. Coast Guard is addressing both of these recommendations through a regulatory project to implement the requirements of Section 610 of the 2010 Coast Guard Authorization Act (Pub. L. 111-281). In the meantime, operators don’t have to wait to be told to implement a SMS … they can implement one voluntarily and be ahead of the game.”

The PVA Flagship SMS program, as another example, was developed in partnership with the Coast Guard, and exemplifies PVA's commitment to safety. From a US Coast Guard perspective, however, the program is too new, and the numbers are too small to (yet) provide any national-level metrics. Says Boone, “One would expect to see over time, reduced deficiencies during inspections and reduced marine casualties, among other ‘fruit’ from a healthy safety culture.”

Looking (& Planning) Ahead
The SMS has been around a long time. Subchapter M is now heralding the advent of similar changes for the inland towboat sector. And, the passenger vessel sector is cooking up its own version of this emerging safety culture tool. Not everyone is on board with it. USCG Captain Boone thinks that’s about to change, but at the same time, change won’t come easily.

“Quite simply, culture is complex and hard to change. Even with the implementation of the International Safety Management Code (ISM) decades ago, there are still pockets of non-believers, skeptics and those that are simply not familiar with it. Let’s face it, ‘systems thinking’ is a higher-level skill and it takes investment to get there. The US Coast Guard recognized its own SMS issues in the aftermath of the sinking and loss of EL FARO, when the Commandant directed in his Final Action Memo (FAM) for marine inspectors to be better trained in ISM and SMS.”

As a starting point, most stakeholders agree that while certainly it takes leadership commitment to create a healthy safety culture, just as important is the reciprocal engagement of employees, their personal accountability, and their inquiring attitude that sustains it. The Coast Guard’s Chief of Investigations & Casualty Analysis, perhaps, says it best when he insists, “The fear of getting bitten by the U.S. Coast Guard is NOT why you should have a SMS. Fear usually gets you compliance at best, concealment at worst; falling far short of the target for which we all should be aiming … For all its merits, however, we should all keep our eyes open for the pervasive by-product called compliance culture, wherein safety is static, only achieves the minimum, and exists mostly to satisfy regulators; all of which leads to overconfidence in our system, which can be dangerous.”

For all that, however, improved compliance with safety standards can sometimes dominate what the Coast Guard sees and measures. To truly assess whether SMS is doing what was intended, operators should assess their own safety culture regularly. Boone, of course, has his ideas on how that should evolve. “I recommend using the Bureau of Safety and Environmental Enforcement’s (BSEE) “Nine characteristics of a robust safety culture” as a benchmark to assess how you’re doing: www.bsee.gov/newsroom/latest-news/statements-and-releases/press-releases/bsee-announces-final-safety-culture. Outside help may be needed to get started, but vessel operators should be willing to use whatever works including climate surveys and interviews to get the truth.”

Whatever your route to compliance and safe operations, don’t wait until it’s too late to find out you’ve got a safety culture problem.

This article first appeared in the January print edition of MarineNews magazine. 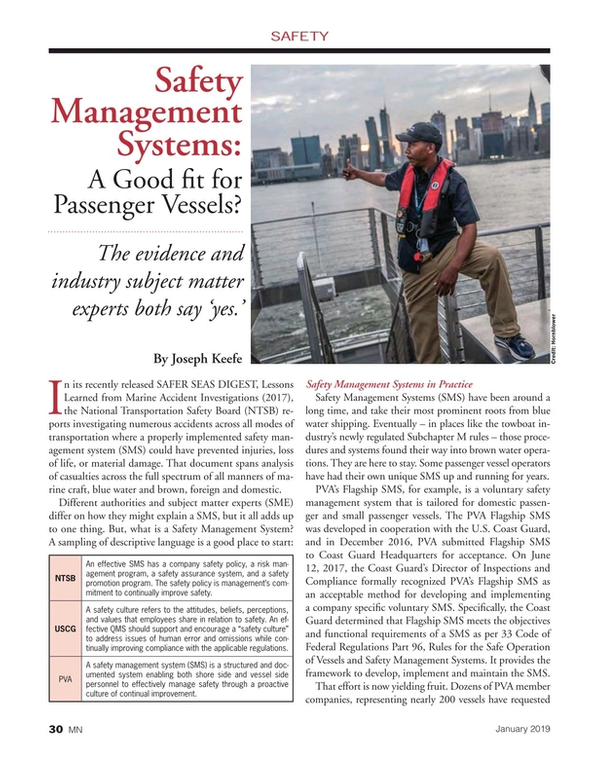