The Apprentice School at Huntington Ingalls Industries’ Newport News Shipbuilding division celebrated its 100-year anniversary just last month. That's worthy of inclusion in this year's MN100 list, for more than one reason. Certainly, this fine school deserves to be mentioned among our very best 100 organizations for this year.

That 100-year anniversary is bigger news than you might otherwise think. Accordingly, the company held a ceremony to mark the day – July 1, 1919 – when the school was established. During the event, a historical highway marker was unveiled, and tools, textbooks, commemorative coins and other items were placed in a time capsule. The alumni room also was dedicated in honor of Danny Hunley, an Apprentice School graduate and retired vice president who was instrumental in getting the new school building built in downtown Newport News in 2013.

The school is celebrating its centennial with special events throughout the year and has received special proclamations from the Commonwealth of Virginia and City of Newport News.

The Apprentice School opened at the end of World War I to recruit, train and develop shipbuilders. Since then, Newport News has evolved over the years and currently is undergoing a massive technological transformation. Advanced digital shipbuilding concepts and technology in The Apprentice School curriculum are now supporting the company’s integration of digital technology across the shipyard.

“The Apprentice School is one of our national treasures,” said Latitia D. McCane, director of education at The Apprentice School. “Its legacy and tradition of excellence have sustained the school for all these years, and as we move forward, our ability to transform ourselves to continue to meet the needs of Newport News Shipbuilding will be paramount to our success for another 100 years.” Indeed, and over the last 100 years, The Apprentice School has produced more than 10,800 graduates who have designed and built ships for the U.S. Navy. The school currently enrolls 850 students.

“The Apprentice School is a national model for apprenticeship programs and a shining example of our commitment to workforce development,” said Xavier Beale, Newport News’ vice president of trades. “When an institution has operated for 100 years, it’s easy to fall back on what we’ve always done. That’s not how you succeed. Our faculty and staff go to great lengths to make the apprentice experience at Newport News Shipbuilding relevant.”

The Apprentice School accepts about 225 apprentices per year. The school offers four- to eight-year, tuition-free apprenticeships in 19 trades and eight optional advanced programs. Apprentices work a 40-hour week and are paid for all work, including time spent in academic classes. Through partnerships with Thomas Nelson Community College, Tidewater Community College and Old Dominion University, The Apprentice School’s academic program provides the opportunity to earn associate degrees in business administration, engineering and engineering technology and bachelor’s degrees in mechanical or electrical engineering.

This article first appeared in this year's AUG edition of MarineNews magazine, our annual MN100 edition. 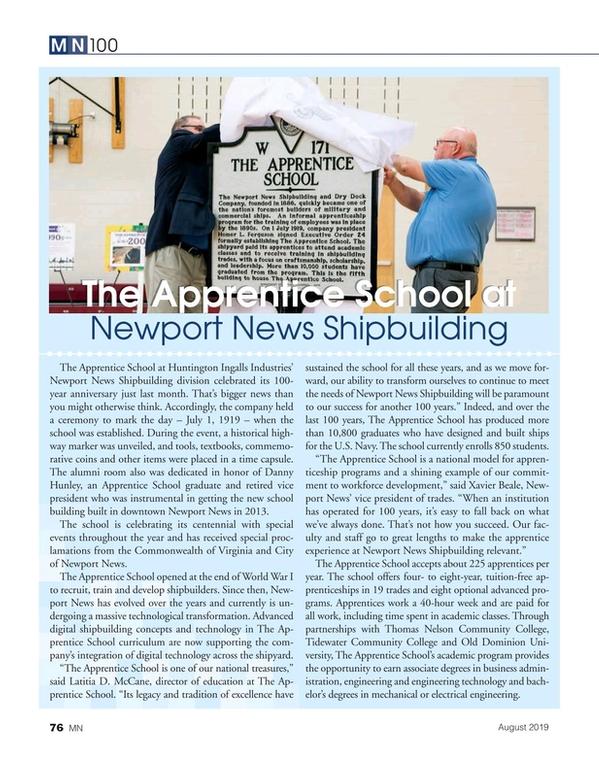