When it comes to shock-mitigation, bigger is truly better.

Let’s consider a thought experiment: You must take the wheel of one of two cars speeding along straight tracks with no exits. Both cars are traveling at 100 km/hour, but the first is 100 meters from a brick wall while the second is only 10 meters from an identical wall. There is nothing to do but decelerate before the crash, and assuming your decision is guided by self-preservation the choice is obvious. Why? Because even the best tactical driver can’t overcome physics, and even if the second car can be stopped before the wall it must undergo severe decelerations. In fact, the second car can be expected to see ten times the accelerations felt in the first car if both are handled perfectly. We can prove it mathematically, but you don’t need any equations to appreciate just how great a luxury stopping distance is when it comes to decelerating a moving body. We will return to this theme, but first let’s take a look at acceleration in the bigger picture.

Defining the Challenge
As you might expect, problems of acceleration (and deceleration) pose many difficulties in engineering design. This is especially true in a dynamic environment. Acceleration is related to force through Newton’s second law, so it constrains design decisions. Acceleration imposes strict limitations on safety, and under severe exposure humans and hardware can quite literally break. Acceleration is often measured in units of “g”, with 1 g equal to what is experienced due to gravity at earth’s surface (9.8 m/s^2).

The human response to acceleration is an interesting and colorful topic. G-LOC, redding-out, and greying-out are among the possibilities, and in addition to endangering rigid skeletal structures, prolonged exposure can affect circulation and rupture blood vessels. For reference sake, astronauts sustain something like 3 to 4 g during launch, but the limits of human tolerance depend on multiple factors, including magnitude, direction and rate of change. Like force, acceleration is a vector, so direction really does matter, and what a person can withstand in the forwards-facing direction might be entirely different from what they will tolerate in the vertical.

With that in mind, let’s talk about impacts, and more specifically, wave impacts involving boats on rough water. These impacts come in at all angles creating bursts of acceleration. They may be erratic and unpredictable and can include rotational components. These impacts are a form of mechanical shock. They are transient acceleration events exemplified by their abrupt onset and severity. These impacts have pulse durations on the order of 100 milliseconds, which is brief in comparison to a shuttle launch, but the abrupt transitions in a wave slam only makes it more brutal. And wave slams can be surprisingly intense. For military-use in fast boats testing at up to 10 g is required. Suffice it to say that the combination of factors can make for an unpleasant or even dangerous ride, and a shock-mitigation industry has grown in response.

The Solution: Shock-Mitigating Safety Gear
At its core, shock-mitigating safety gear consists of a medium or mechanism separating an input surface, such as a boat’s deck, and a person seeking to reduce their exposure. When all goes well, an impact is attenuated as it passes through the mechanism, resulting in a gentler motion for the person using it. But how is the attenuation achieved? The answer, in all but the most exotic cases, comes down to a compression or material deformation of the underlying device, with energy dissipated as heat. And just like the cars speeding towards a brick wall, the ability of a shock-mitigating device to lessen an impact and ensure a smooth ride is tied to its stopping distance.

We gain further insight by considering the definition of acceleration, and it is formally defined as the rate of change of velocity with respect to time. When a boat collides with a wave it undergoes a velocity change due to its motion relative to the water’s surface, and so the acceleration will depend on the size of that change and inversely depend on the time over which it occurs. This suggests the two main approaches to lowering impact severity: reduce the impact velocity or increase the time duration of the event.

On the water, a boat’s hull-design, speed, and the sea-state are the dominant factors that dictate the velocity change during a wave slam. This change is thus reduced by improved hull design, slowing down, and avoiding poor conditions. These preventative measures lie at the heart of any shock-reduction strategy, and in our car analogy they correspond to reducing each car’s initial speed. But impacts cannot be eliminated entirely. In certain cases, speed cannot be reduced, waves cannot be avoided, and even the savviest operator can be caught off-guard. This is where shock-mitigating gear comes into play, and it fulfills its purpose by increasing the time duration of each impact, smearing it out temporally so that it is less severe. The longer it takes to undergo the impact velocity change, the smoother the ride will be, and adding suspension travel to a shock-mitigating device is a sensible way to achieve this. It’s akin to giving our imaginary cars more braking distance before the wall.

With only basic calculations we can show the average force (and acceleration) required to bring a moving body to rest is inversely proportional to the stopping distance. Of course, the stopping distance must be used effectively, just as a car’s driver must skillfully apply the brakes. But if it is correctly used there is no way around it, a longer deceleration leads to lower average forces. This explains why a 1” thick slab of vibration-muffling foam can’t compete with a tuned 4” travel suspension system when it comes to mitigating shocks. Likewise, a 4” travel suspension will be easily outgunned by its 10” rival.  The argument generally holds for suspension seats, matting materials, and any mechanism that mitigate shocks through mechanical deformations. The principle applies to impacts in any direction, including the lateral. If only a short travel distance is provided, only a modicum of shock-mitigation can be expected.

This is not to say that suspension travel distance is the only consideration. Far from it, there are space and weight limitations on boat, and ergonomics must be a top priority. Operators have to interact with controls, maintain a low profile, and not sacrifice their sightlines. But when it comes to shock-mitigation, bigger really is better, and long-travel suspensions will yield the best results.

Tim Rees is the Chief Scientist at SHOXS Seats. He holds a Ph.D. in Applied Mathematics with a specialization in fluid dynamics and computational methods. Since joining SHOXS in 2015, Tim has focused on the design and optimization of suspension systems for the marine impact environment, and he was involved in an ISO effort to develop a shock-mitigating seat performance test standard. Tim remains active in the development and evaluation of suspension systems and testing methods, and he can be reached at [email protected]

This article first appeared in the October print edition of MarineNews magazine. 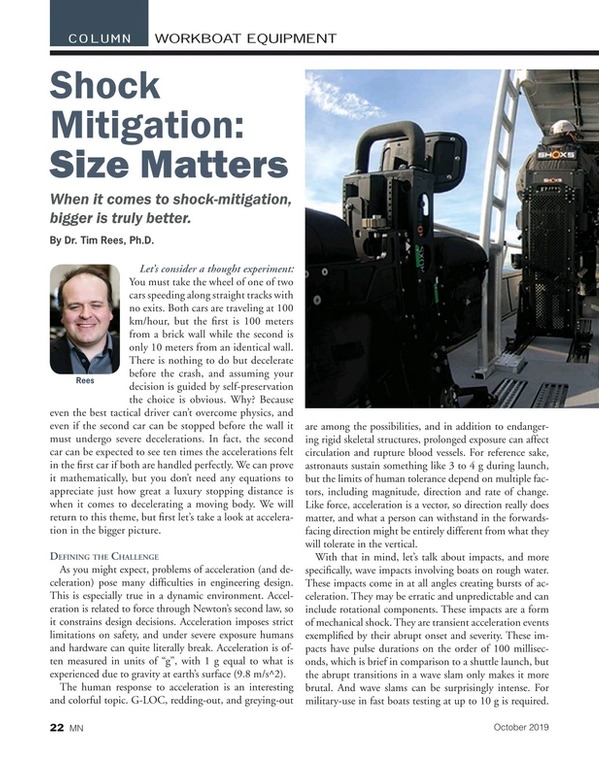