Reverse Osmosis and the New Dawn of Marine Desalination

Today’s desalination plants are rugged, durable and highly automated to meet the demands of operators and the crew, enabling them to meet schedule and mission with ample potable water production.

In the days of old, marine distilling plants – then mostly steam – relied on archaic flash evaporators, which used steam to heat, power an air ejector, and ultimately create a vacuum whereby seawater would flash or boil and ultimately be distilled. The process would often occur over two stages and what did not flash would be pumped overboard as brine. Times have changed. So has the associated equipment with more efficient equipment that’s easier to operate and maintain.

Marine evaporator plants which had used steam, built up scale easily. They were subject to steam flow, temperatures and pressures which lead to high maintenance. They incorporated several pumps, alarms, dump valves, sight glass indicators and were prone to many reliability and performance challenges. Plus, they were labor intensive, often requiring a watch stander to dedicate much time to their operation, being careful to fill appropriate tanks, have careful vale alignment, and ensure that all heat exchangers within the system were working.

They also required extensive periodic maintenance and were somewhat cumbersome. This has all changed with the emergence of reverse osmosis and desalination vessels on modern marine and offshore vessels. The new technology is a critical link in a vessel’s ability to operate and provide a self-sufficient source of fresh and potable water for the crew and any other applications that might require fresh water.

The new dawn of reverse osmosis
Jeffrey Lum, is a sales and account manager for EVAC, a leading provider of integrated water and waste management systems  for the marine, offshore and building industries in South Florida.

“The evaporator was the most common way of securing water during transit,” says Jeff Lum. “But with the new trend of slow-steaming, and the reduction of power for diesel-electric vessels, it [the ship] becomes more of a consumer than a benefit.” With the evolution of reverse osmosis units being implemented, shipboard, the equipment’s economy and overall efficiency was improved.

“The energy required to start the evaporator is costly,” adds Lum. “The reverse osmosis plants were created as a better and more efficient alternative and have been pretty standard since the mid ’90s.”

In actuality, potable water produced by reverse osmosis (RO) is a consummate form of water treatment. It is filtered by membranes, down to the micron level, and provides the purest of water.

“The osmosis process is liquid diffusion through a membrane,” says Lum. “ If we have two buckets, one with fresh water and the other with saltwater and connect both with a membrane, the natural process would be that the fresh will migrate the salt side. The reverse process is that we insert pressure in the saltwater side, forcing it to the fresh side while the salt residues remain in the membrane. The permeate water after the process is so pure that it needs to be processed with minerals so it can be consumed. The end quality product is much better than what we drink from our residential faucets.”

Lum says that in the new build segment, where the specs have been rewritten to be more efficient. “The RO plants are installed since this period,” he says. “But in the refit [or retrofit] segment [of the marine market], there is a common trend to either install more units, revamp older plants and replace evaporators with RO’s.” 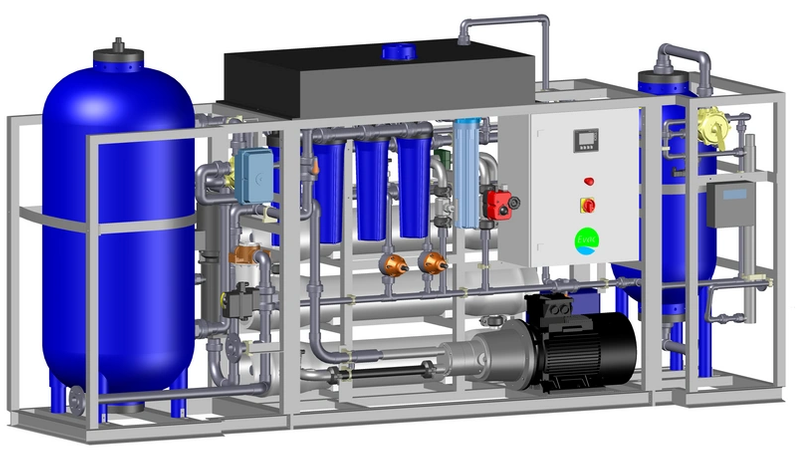 Automation for operation
“We’ve moved away from anything that really has any type of manual interface,” explains McGuire. “It’s all automated now. It’s one touch operation. All the pressures come up automatically. All your settings will adjust automatically, based upon the water you’re running in. We’ve eliminated the end user, or the indicator, from the process so that they no longer have to worry about turning the machine on the pressure and then coming back and monitoring it all the time.”

McGuire points out that the automation was driven by the change in operators. Shipboard engineers go from ship to ship and often don’t have time to learn a new system or get deeply involved with the systems. “Our attempt at automation was to make it as simple for the user, no matter who that user is and what their skill set was, to operate these machines,” he says. “We’ve even eliminated belts and pulleys and anything that has to do with it.” He acknowledges that older units have more mechanical parts and it becomes a maintenance item, as belt and pulley drives may get out of adjustment. “It’s all direct drive now,” he says. “With gearbox, reduction gears, or even direct coupled- depending upon the size of the system, to them by controlling the speeds of the motors.”

There once were bronze and brass pumps used. Then nickel aluminum bronze pumps came along - without great results. Then there were radial axle pumps that did not require oil. But, as McGuire explains, the best high-pressure pumps he found were those made from 316 stainless steel as it had the best performance and the greatest durability and has been FCI Watermakers’ choice in high-pressure pumps.

316 stainless steel is ideally suited for marine and saltwater applications and is the required material for the service these pumps endure, and the critical function they perform, in a very important shipboard system. 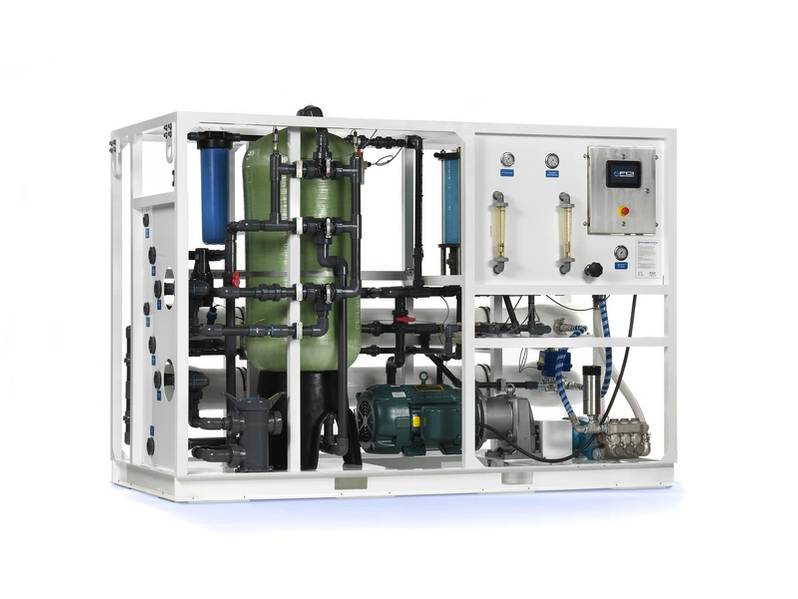 Aftermarket support
A common issue with desalination plants is parts replacement, or more specifically, membrane replacement. The RO membrane does not last forever. Periodically it needs to be replaced. Acquiring a replacement membrane becomes problematic because not all membranes are suitable for a particular unit. Very often, a ship may order a membrane in a foreign port or a remote location, and it is an unsuitable membrane that becomes a bad performing membrane.

As McGuire explains, often a Chief Engineer or ship owners needs to replace a membrane and connects with their local ship chandlery, or their local vendor. They replace it with an off-spec membrane, put it in, and it’s not designed for the normal operating pressure, gallons of output, or that desalination plant design.

“And so, they don’t perform correctly,” says McGuire. “Stick with the membranes that are specified on the machine, because they’re designed for that machine.

“We can resupply from any number of distributors we have around the world or they can call us directly,” explains McGuire. “We stock hundreds of membranes. And we’ll always have stock of membranes. We can get them to you wherever you are”

But he cautions about having stagnant membranes in inventory. “Because membranes usually have a shelf life of a year, some dealers don’t like to put them on a shelf because it just sits there and then it might go bad on them. So, often they will just deploy directly from us.” 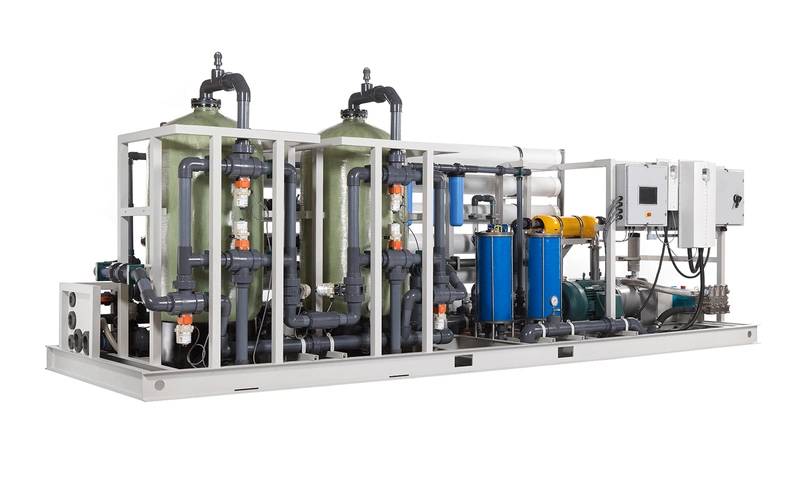 Proper operation and maintenance
Another point of design for FCI Watermaker’s operation is the inclusion of automatic freshwater washes periodically. “Every time that machine turns off, the system flushed itself with fresh water,” he says. “So, the membranes, the filters, the high-pressure pumps, all that are sitting in salt water for the long duration.” He says they have allowed their automation to be programmed to automatically flush the system with fresh water, if it goes into lay up for a period of time or will be idle for a prolonged period of time.

McGuire says that with timely, scheduled maintenance, and prompt replacement of consumable parts on the plant such as seals, wearing rings, membranes, and any other necessary parts, the system can las the life of the ship. “You could feasibly build a ship tomorrow and with proper maintenance, proper backflow, proper flushing, and periodic replacement of certain parts, it should last.

“We have systems that are still running from the first systems that we ever put out there,” he says, “It’s a matter of replacing the consumables, keeping up on the maintenance of the system. So, you can keep this thing going for as long as you want to keep replacing parts.”

Keeping desalination plants is a critical link in shipboard operation. The availability of fresh water for the crew is a determinant factor in the vessel maintaining its mission and staying on schedule. This becomes very important if a vessel is unable to take on potable water along its voyage or must operate for long stretches of time. Desalination plants, operating properly, with the right maintenance and equipment, are crucial to smooth and efficient marine engineering.

“Water is becoming somewhat of a commodity,” says Lum. “In the cruise segment, we see that the passengers are utilizing more freshwater every year, but there is a lot of waste as well. Black and grey water process should be one of the topics shortly as a lot could be re-utilized as technical water.” 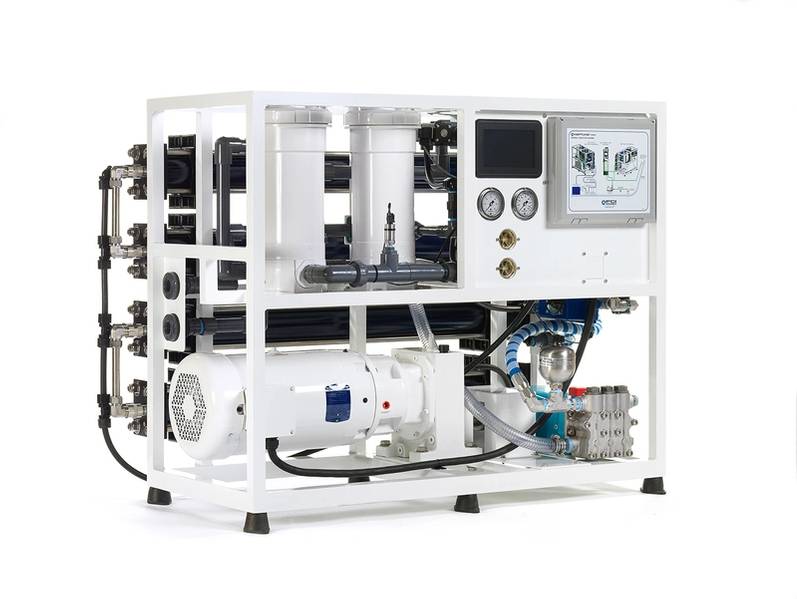 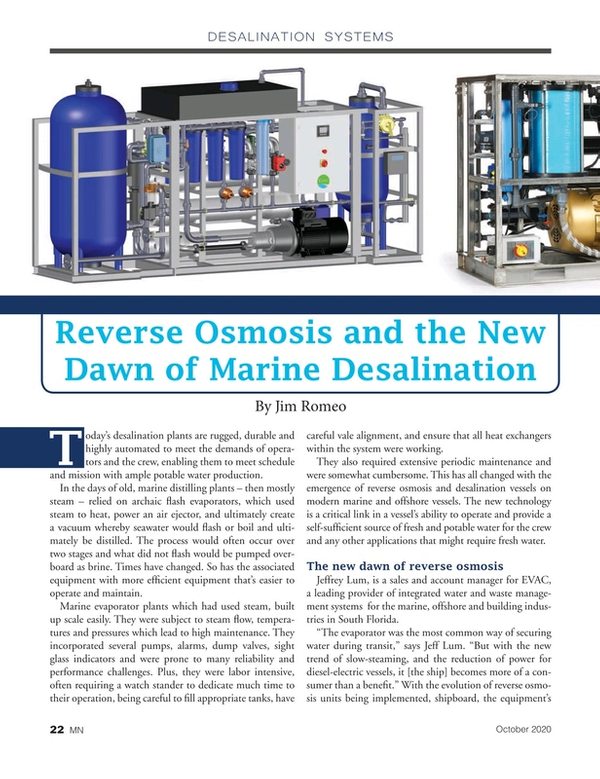 Read Reverse Osmosis and the New Dawn of Marine Desalination in Pdf, Flash or Html5 edition of October 2020 Marine News