The U.S. dredging fleet is growing. Presently on order and under construction is a raft of in-demand equipment that will help to keep America’s ports and waterways open, safeguard coastal communities and maintain the vital flow of maritime commerce to, from and through the U.S.

In August, Eastern Shipbuilding Group cut first steel for a new trailing suction hopper dredge (TSHD) it is building for Weeks Marine, and the keel was laid the following month at the builder’s Allanton Shipyard in Panama City, Fla. The new 6,540 cubic meter capacity dredge R.B. Weeks, ordered by the Cranford, N.J.-based marine construction and dredging contractor in April, is scheduled for delivery in early 2023. It is the second TSHD Eastern is building for Weeks Marine, following the Magdalen delivered in December of 2017.

Continuing the dredge building boom currently underway in the U.S., Manson Construction Co. in September announced a contract with Keppel AmFELS to build a new hopper dredge at the shipbuilder’s facility in Brownsville, Texas. The self-propelled TSHD Frederick Paup will be the largest in the United States, representing Manson’s single biggest investment in its 115-year history, the company said. The 15,000 cubic yard hopper dredge—designed in collaboration with Hockema Whalen Myers Associates, Inc. of Seattle—has a length of 420 feet, breadth of 81 feet and draft of 28.5 feet. It will be highly automated with a diesel-electric power system, and built to the requirements of classification society American Bureau of Shipping (ABS). The new dredge is scheduled to be fully operational by spring 2023. When completed, the dredger will operate primarily along the U.S. Gulf and Atlantic coasts. 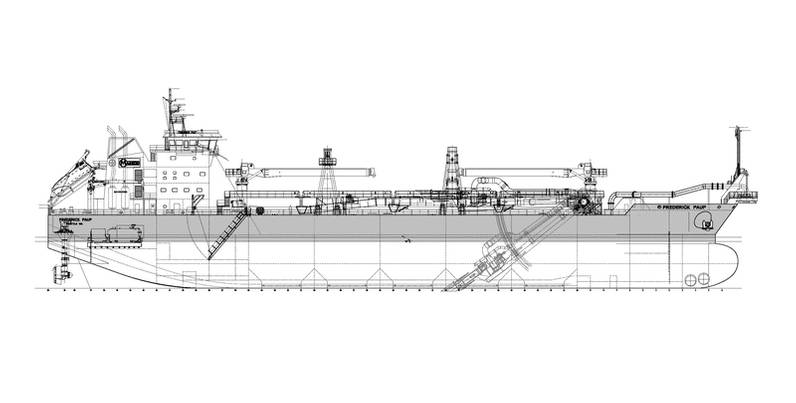 The 15,000 cubic meter capacity hopper dredge Frederick Paup will be the largest TSHD in the United States. (Image: Manson Construction)

In June, Great Lakes Dredge & Dock Corporation (GLDD) signed a contract with Conrad Shipyard for the construction of a new 6,500-cubic-yard-capacity TSHD for scheduled delivery in the first quarter of 2023. The deal includes an option to build an additional dredge, the U.S.’ largest dredging services provider said. Conrad is performing the detail design and construct the dredges at its Amelia, La. location based on a regulatory-level design provided by Great Lakes’ in-house engineering department in collaboration with C-Job Naval Architects.

Lasse Petterson, GLDD president and CEO, said at the time of the order, “Great Lakes continues to strategically invest in its dredging fleet. This highly automated newbuild vessel will increase the capabilities of our hopper fleet in the coastal protection and maintenance markets as well addressing specific needs in the growing offshore wind market.”

The new dredge will complement Great Lakes’ existing six-dredge Hopper fleet, including the ATB Tug Douglas B. Mackie and 15,000-cubic-yard-capacity barge Ellis Island, which was delivered in the fourth quarter of 2017. “This vessel reinforces our commitment to the U.S Army Corps of Engineers and faith in the future of the U.S. dredging market,” Petterson added.

Also in June, Westlake, La.-based Mike Hooks, LLC signed a deal with Mobile, Ala. fabricator Mobile Pulley Works (MPW) to design and build a new 27-inch cutter suction dredge (CSD). In addition to the new dredge, Hooks and MPW are working closely on overhauling many of the key components and equipment on Hooks’ existing fleet of dredges. This will include all-new, wear-resistant dredge pumps that provide an efficiency of up to 90%, rebuilding and replacing worn ladders as well as the drives to pumps and cutterheads. MPW has also been contracted to deliver ball joints, pontoons, and pipeline to provide additional support to Hooks’ existing and future dredging operations. 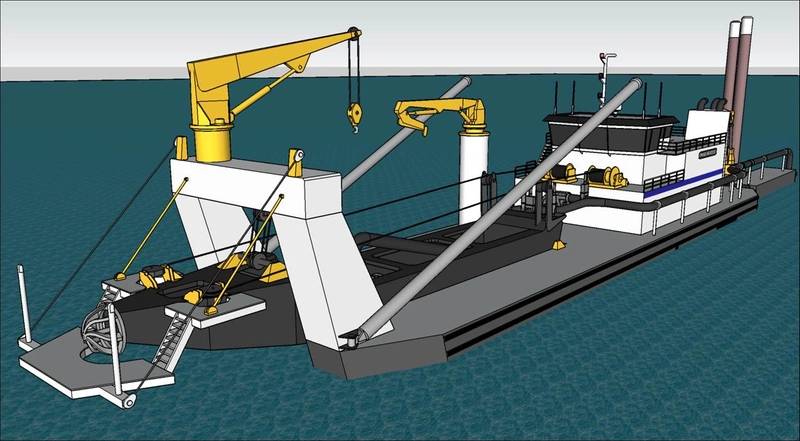 Galveston, Texas-based dredging contractor Callan Marine announced in July that it ordered a new 28-inch CSD that’s due to join its fleet in 2021. The new dredge, General Bradley, is currently being built by Hagler Systems at the Halimar Shipyard in Morgan City, La. It will be 341 feet long with a 6.6-foot draft. Main dredge design and engineering work was performed by APT Offshore BV, who is also supplying key dredge components. The diesel-electric driven General Bradley will be equipped with three ABC 12DZC engines that supply 9,260 horsepower combined. It will also feature advanced production automation and monitoring systems.

Callan said it intends to deploy the General Bradley from early 2021, primarily for brown water division projects. The dredge will be suited for both maintenance and capital dredging projects.

“The General Bradley is a demonstration of our commitment to capital improvement projects along the Gulf Coast region,” Maxie McGuire, President of Callan Marine, said in a statement. “The Bradley will transcend our ‘middle market’ offering and truly be a difference-maker in large river and ship channel dredging.”

McGuire told Marine News in a 2019 interview that the expansion of Callan’s fleet is a direct response to increased opportunities and the direction of the dredging market. “The market is extremely busy and we are fortunate to have clients that are willing to make these investments to grow infrastructure,” he said. “Callan Marine has a very healthy backlog at this time, and we feel there will be a great dredging market for years to come.”

The General Bradley will be Callan’s fifth dredge, following the arrival of the powerful 32-inch General MacArthur, which entered service earlier in 2020. Other dredges in the company’s fleet include the 18-inch General Pershing, 16-inch General Patton and 12-inch General Eisenhower.

Earlier on, in May, the Netherlands-based Royal IHC said it was awarded a contract to design and build a Jones Act compliant dredger for the North Carolina State Ports Authority (NCSPA) for delivery in 2021. The vessel will perform maintenance in the main seaports of Wilmington and Morehead City in order to safeguard the depth of the ports. To do so, it will move sediment from the main channel (with the assistance of natural currents), while keeping the required material within the Cape Fear river system. The water injection dredger will be built at a partner shipyard in the U.S.

“The construction, procurement of the main components, assembly and testing will be performed in the United States (following the Jones Act regulations) and is being managed by the local IHC operations team based in Houston,” said Projects & Services Director Rafael Vorcaro. “We consider this project as an important step to develop the local team and prepare the organization for future projects in the United States”. 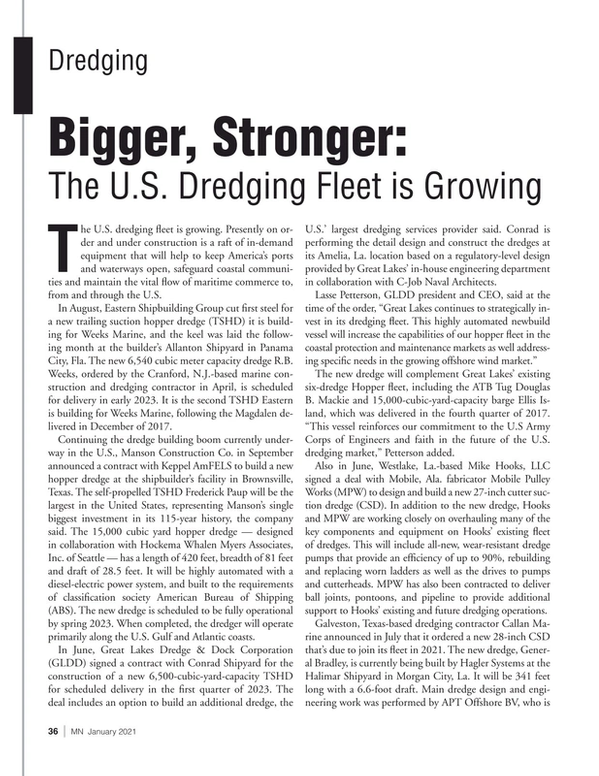