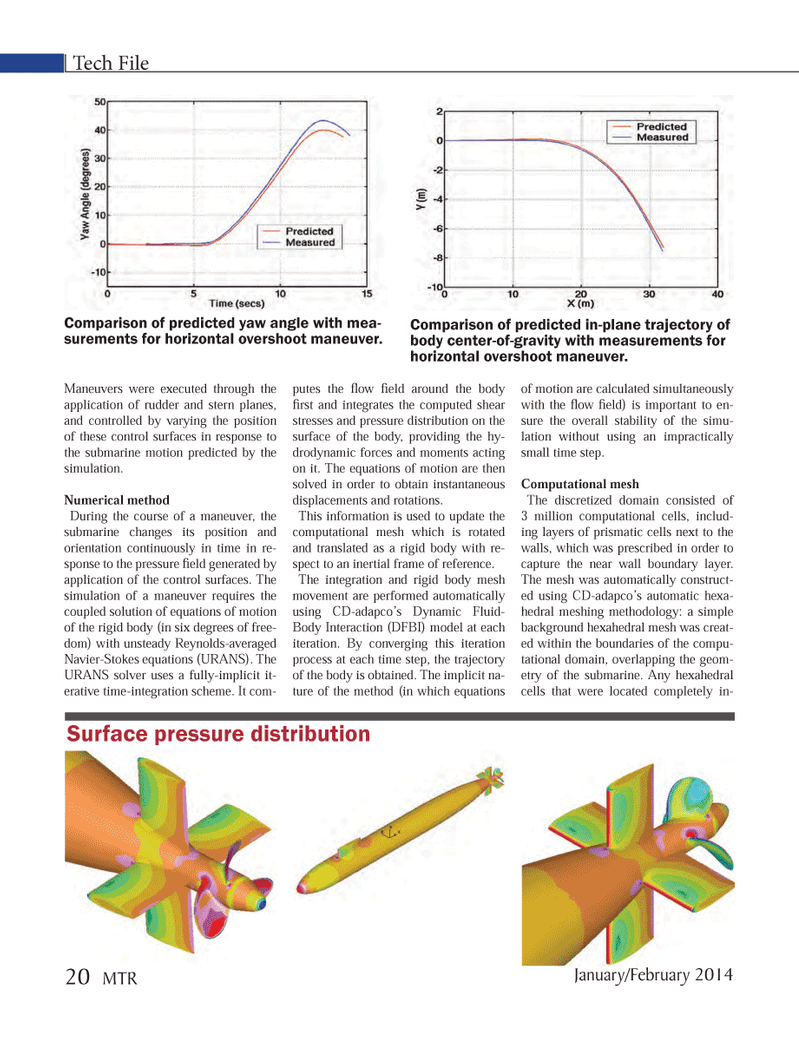 Tech File Maneuvers were executed through the application of rudder and stern planes, and controlled by varying the position of these control surfaces in response to the submarine motion predicted by the simulation.Numerical methodDuring the course of a maneuver, the submarine changes its position and orientation continuously in time in re-sponse to the pressure Þ eld generated by application of the control surfaces. The simulation of a maneuver requires the coupled solution of equations of motion of the rigid body (in six degrees of free- dom) with unsteady Reynolds-averaged Navier-Stokes equations (URANS). The URANS solver uses a fully-implicit it- erative time-integration scheme. It com- putes the ß ow Þ eld around the body Þ rst and integrates the computed shear stresses and pressure distribution on the surface of the body, providing the hy- drodynamic forces and moments acting on it. The equations of motion are then solved in order to obtain instantaneous displacements and rotations.This information is used to update the computational mesh which is rotated and translated as a rigid body with re-spect to an inertial frame of reference.The integration and rigid body mesh movement are performed automatically using CD-adapcoÕs Dynamic Fluid- Body Interaction (DFBI) model at each iteration. By converging this iteration process at each time step, the trajectory of the body is obtained. The implicit na- ture of the method (in which equations of motion are calculated simultaneously with the ß ow Þ eld) is important to en- sure the overall stability of the simu- lation without using an impractically small time step.Computational meshThe discretized domain consisted of 3 million computational cells, includ-ing layers of prismatic cells next to the walls, which was prescribed in order to capture the near wall boundary layer. The mesh was automatically construct- ed using CD-adapcoÕs automatic hexa- hedral meshing methodology: a simple background hexahedral mesh was creat- ed within the boundaries of the compu-tational domain, overlapping the geom- etry of the submarine. Any hexahedral cells that were located completely in-Comparison of predicted in-plane trajectory of body center-of-gravity with measurements for horizontal overshoot maneuver. Surface pressure distribution Comparison of predicted yaw angle with mea- surements for horizontal overshoot maneuver. 20 MTRJanuary/February 2014 MTR #1 (18-33).indd 20MTR #1 (18-33).indd 201/23/2014 10:16:40 AM1/23/2014 10:16:40 AM